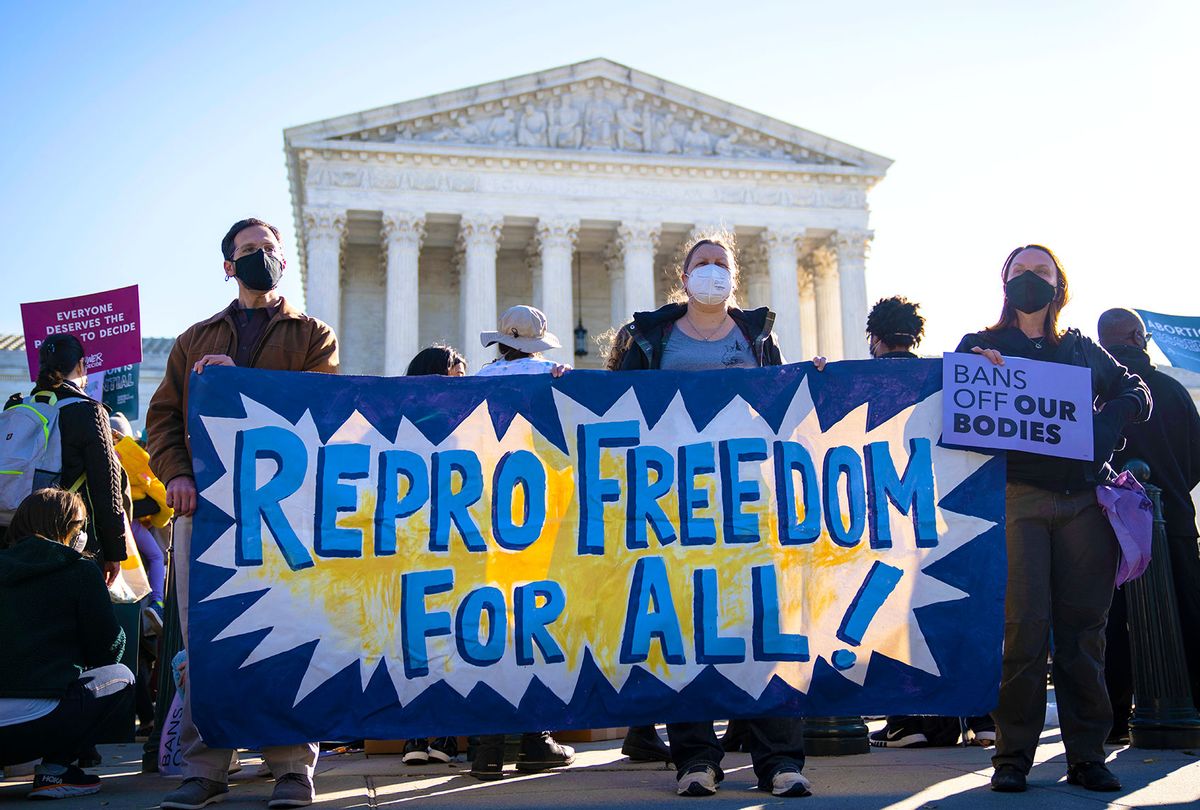 Pro-choice demonstrators rally outside the U.S. Supreme Court on November 01, 2021 in Washington, DC. On Monday, the Supreme Court is hearing arguments in a challenge to the controversial Texas abortion law which bans abortions after 6 weeks. (Drew Angerer/Getty Images)
--

This developing story was updated at 12:10 a.m. ET with additional details and reactions.

The Supreme Court is set to overturn Roe v. Wade, according to a leaked draft of a majority opinion written by Justice Samuel Alito that Politico published on Monday night.

​"We hold that Roe and Casey must be overruled," Alito wrote in the document, labeled as the "Opinion of the Court." "It is time to heed the Constitution and return the issue of abortion to the people's elected representatives."

According to Politico, the ruling was drafted in February and would immediately end nearly 50 years of guaranteed abortion rights mandated by the Roe v. Wade decision in 1973, which ruled that the U.S. Constitution protected a pregnant woman's right to have an abortion. If the Supreme Court overturns Roe as expected, it would be up to each individual state to decide whether to ban or allow abortions. Roughly half of all U.S. states would be likely either to outlaw all abortions or enact sweeping new restrictions.

RELATED: After Roe v. Wade: Now the fight for reproductive justice moves to the states

Politico reports that it's unclear whether there have been any changes to the draft ruling since it was written. The site says it received the draft from "a person familiar with the court's proceedings in the Mississippi case along with other details supporting the authenticity of the document." The Supreme Court is currently deliberating the constitutionality of a Mississippi state law that prohibits abortion after 15 weeks of pregnancy, but the opinion in that case — which was widely expected to result in overturning Roe v. Wade — wasn't expected to be published until late June.

As noted in the Politico report, it is unprecedented for a draft decision to be leaked while a case is still pending. Also without precedent is the view this draft offers into the justices' deliberations.

"Roe was egregiously wrong from the start," Alito writes. "Its reasoning was exceptionally weak, and the decision has had damaging consequences. And far from bringing about a national settlement of the abortion issue, Roe and Casey have enflamed debate and deepened division."

If the ruling comes to pass and Roe v. Wade is overturned, the map for reproductive health care in the United States will be completely redrawn. Guttmacher Institute, a nonprofit pro-choice research organization, predicts as many as 26 states will severely restrict abortion access or ban it entirely if Roe v. Wade is overturned. The states likely to ban abortions entirely and immediately without federal protections would include virtually the entire South, from Texas to Florida, and several Midwestern and Plains states as well. Women in these states who sought to terminate pregnancies would be forced to travel elsewhere for abortion services, if they were able to do so.

As reported by the New York Times, research suggests that nearly half of women who won't have access to legal abortion in a post-Roe America would be forced to carry their pregnancies to term. Such a scenario could resemble the U.S before the Roe decision, when a patchwork of different laws in different states meant that access to abortion varied greatly in different regions of the country. The Times cited a 2019 study by a Middlebury College economics professor predicting that a reversal of Roe would result in a 32.8% decrease in the number of abortions performed in the United States.

"In the year following a reversal, increases in travel distances are predicted to prevent 93,546 to143,561 women from accessing abortion care," the paper noted.

"We are going to see some women will still do dangerous things like having the boyfriend hit them in the belly or throwing themselves down stairs or taking dangerous herbs," Carole Joffe, a professor at the University of California-San Francisco's Bixby Center for Global Reproductive Health, told the New York Times.

Pro-choice and women's health organizations across the country are swiftly responding to the report. Mini Timmaraju, president of NARAL Pro-Choice America, called the report the most "ominous and alarming sign yet" that Roe v. Wade is poised to be overturned by the high court.

"While this is a draft opinion and abortion is still legal, we need to brace for a future where more and more people are punished and criminalized for seeking and providing abortion care," Timmaraju said in an emailed statement to press. "Now more than ever, we must support those working to provide abortion care and elect champions who will relentlessly fight for reproductive freedom and take bold action to safeguard abortion rights."

Read more on reproductive rights in the United States: