After Roe v. Wade: Now the fight for reproductive justice moves to the states

Progressives have long been wary of "states' rights." But that's where the struggle for abortion rights can be won 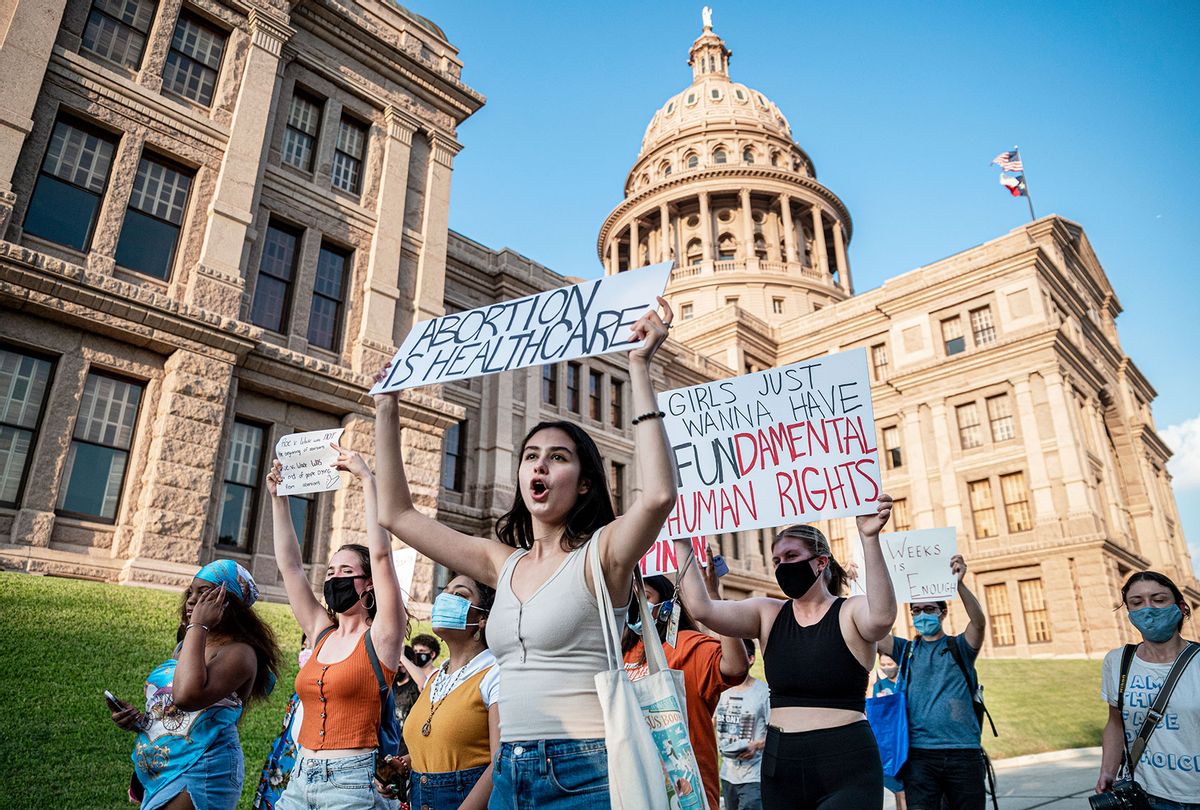 Pro-choice protesters march outside the Texas State Capitol on Wednesday, Sept. 1, 2021 in Austin, TX. Texas passed SB8 which effectively bans nearly all abortions and it went into effect Sept. 1. A request to the Supreme Court to block the bill went unanswered and the Court still has yet to take any action on it. (Sergio Flores For The Washington Post via Getty Images)
--

Trepidation fills many progressives as we approach the 49th anniversary of Roe v. Wade. While most Americans continue to support legal access to abortion, a conservative Supreme Court supermajority stands poised to gut if not overturn the decision later this year in the Dobbs v. Jackson case. And it would be a foolish dream to imagine that our current fragile, deadlocked federal Democratic trifecta can shepherd legislation guaranteeing abortion access through to passage. The fight for reproductive rights is headed back to the states.

This makes building progressive, pro-choice power in our states urgent and existential. As we prepare for state battle, progressives must commit to two principles. First, we must embrace the fight for state power as a vital, necessary part of the progressive project. State and federal power exist in interdependence, and progressives must permanently pledge to build power at both levels. Second, we must envision the capacity of states to do more for us than solely protect the right to an abortion. Legal abortion is necessary, but not sufficient. It must be the floor, not the ceiling, in the struggle to establish the human right of bodily autonomy. In this moment, let us also reimagine what our states could do for us, and indeed to demand that our states create the conditions under which reproductive justice can be achieved.

Building state power is necessary for the progressive project

Progressives have long been wary of "states' rights' and federalism. As dean of Yale Law School and federalism scholar Heather Gerken has explained, the concept of states' rights has been invoked to defend deeply abhorrent institutions in our history, including slavery and Jim Crow. Thus progressives look to national power, and rights derived under the federal Constitution, as the gold standard for establishing civil rights and other protections. In my view, progressives' continued wariness of states, in terms of both institution-building and narrative-building, leaves a tremendous amount of power on the table. By ceding institutional and narrative control about the importance and value of state power, progressives directly serve conservative interests that have ruthlessly and successfully sought to build power at this level of government for centuries.

A different approach is to push beyond the stale, false binary choice between building federal power and building state power. They are interdependent levels of power — we must do both. We can organize and advocate for electoral, policy and doctrinal victories at the federal level, and celebrate them when they occur. At the same time, we can also tend to the gardens of our states, where building power is just as important. We need to shift the narrative beyond the conception of state power as inferior and even unsavory, and instead understand federal and state power as interdependent, symbiotic and necessary at both levels to achieve progressive goals. In addition to that narrative shift, we need a massive redistribution of progressive effort, strategy and resources toward our states. As states grow in power, we must reckon with and embrace their positive potential in order to achieve the protections and conditions we so deeply desire.

Imagining, and demanding, reproductive justice in our states

Once we commit to invest as much in states as we do in federal power-building, we can do the work of envisioning states as virtuous venues for progress — and demanding that they deliver on this promise. As the unparalleled, uncompromising American feminist bell hooks said, "To be truly visionary we have to root our imagination in our concrete reality while simultaneously imagining possibilities beyond that reality."

In our current reality, we cannot rely on the courts or the federal government to protect our reproductive rights. But we can imagine different realities — including one in which states are bastions of progressive policies that dismantle barriers to abortion access. And we can further imagine a reality in which reflective state legislatures create the conditions under which we have both the freedom to control our bodies and to parent with dignity, so that we can achieve full reproductive justice.

The reproductive justice organizing framework, created by Black women such as Loretta Ross, centers the experiences and leadership of Black women and communities most affected by oppression. It asserts the importance of fighting equally for several human rights, including the ability to choose to have a child, or not to, as well as the ability to parent with dignity. This framework includes abortion access as a key human right, and also recognizes that reproductive self-determination is directly linked to community conditions. Social and policy conditions as varied as the ability to access quality health care, to receive fair wages and experience safe work conditions and to live in safe homes with clean air and water are inextricably tied to reproductive autonomy, access and freedom.

Critically, many of these conditions have always been, and are now increasingly, controlled by state government. Indeed, as we brace for the potential of a "post-Roe America," we must remember that there has never even been a uniformly "Roe America." Abortion access has always been conditional — on class, geography, race and ability. Decades of public policies at the state level rooted in systemic racism and inequality have created ground-level conditions in which poor people, Black people, indigenous people and other people of color often remain situated farthest from the promise of reproductive justice.

As we approach Roe's anniversary this year, progressives must be clear-eyed about the work ahead. We must push beyond stale narratives about "states' rights" and instead embrace the fight for state power as a necessary and permanent aspect of our struggle. We must reimagine states as expansive and transformative venues for the future — not just the future of reproductive rights, but of reproductive justice.

Read more on the fate of abortion rights and the struggle for reproductive justice:

Gaby Goldstein is co-founder at Sister District, whose mission is to build progressive power in state legislatures. As senior vice president for strategic initiatives, she leads programs that strengthen the pipeline of progressive candidates and support progressive state legislators once elected. Follow her on Twitter: @gaby__goldstein