Even if the U.S. did support mothers — and it doesn't — there will always be a need for abortion 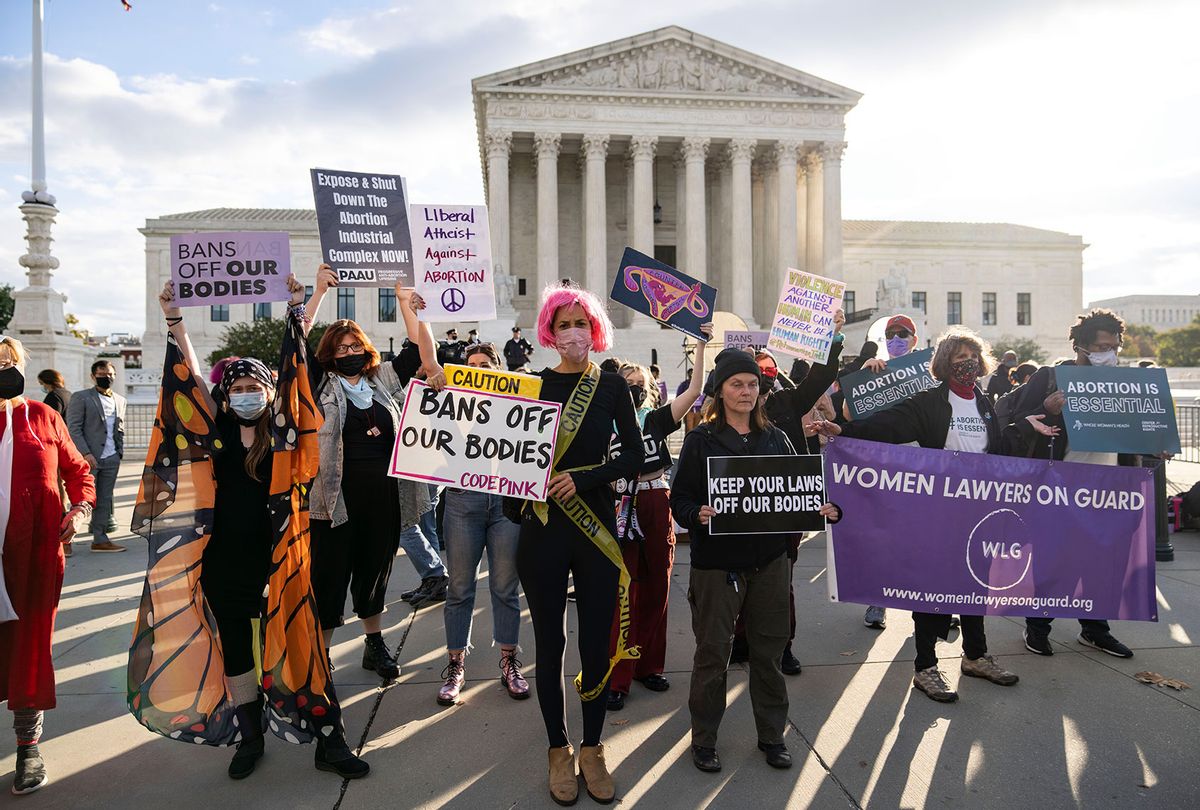 Pro-choice and anti-abortion demonstrators rally outside the U.S. Supreme Court on November 01, 2021 in Washington, DC. On Monday, the Supreme Court is hearing arguments in a challenge to the controversial Texas abortion law which bans abortions after 6 weeks. (Drew Angerer/Getty Images)
--

In a sign of the utter bad faith shot throughout the conservative arguments for abortion bans, the lawyers defending Mississippi's pre-viability ban in the Dobbs v. Jackson Women's Health Clinic are claiming that women don't need abortion because — wait for it — of all the great social safety net programs supporting mothers that Americans enjoy these days.

Mississippi's lawyers argued before the Supreme Court on Wednesday that "numerous laws enacted since Roe — addressing pregnancy discrimination, requiring leave time, assisting with child care and more — facilitate the ability of women to pursue both career success and a rich family life." The Washington Post also gave Mississippi attorney general Lynn Fitch space to make the breathtakingly dishonest argument that women pay no professional or economic penalty for unwanted childbearing. "[I]t has become easier for women to reach the very pinnacle of our success, economically and socially" without abortion, she writes, because, um, "[m]aternity leave and even paternity leave are commonplace." Just in case you were unsure she is a big, fat liar, she also throws in, "Men and women are sharing responsibilities in the home." (No, they are not.)

These arguments are such self-evident nonsense that there's little chance that the intent is to fool anyone. Rather it's about propping facile justifications for abortion bans that are, in reality, rooted in a misogynistic desire to punish women for having sex.

Even having to debunk these arguments feels debasing, so hats off to Claire Cain Miller of the New York Times, who took on the task. "The United States stands out for its absence of national paid leave," she writes, and child care "is unaffordable for nearly half of American families." In addition, "access to abortion for young women with unplanned pregnancies led to higher earnings, more education and a higher chance of being a professional or manager than seen in women denied access to abortion." Studies show, time and again, abortion access materially improves women's lives.

But even if the U.S. were the socialist paradise that Mississippi lawyers are pretending it is, that would not justify abortion bans.

Abortion is not an insurance plan to protect against career derailment. It's about very basic human rights: To control your body and to make very basic decisions about your life. As Julie Rikelman of the Center for Reproductive Rights argued before the Supreme Court on Wednesday, "For a state to take control of a woman's body and demand that she go through pregnancy and childbirth with all the physical risks and life-altering consequences that brings is a fundamental deprivation of her liberty." Yes, even if you get to go back to work afterward.

The abortion debate is contentious not because of inadequate maternity leave, but because it cuts right to the heart of the larger struggle over whether or not women should be regarded as full human beings. It's why even having this debate over maternity leave and social safety nets feels debasing. It's undergirded by this assumption that women are too dumb to know what they need and want and so need a little coercion to understand the endless supposed bliss that awaits them after they are forced to give birth.

Fitch has been heavily promoting the claim that having a baby is always the best thing, and if a pregnant person doesn't agree, it must be because she's stupid and needs correction. She even told EWTN Pro-Life Weekly host Catherine Hadro that banning abortion is a gift because "the mothers that will get the chance to really redirect their lives," and women "can have these beautiful children and you can have your careers." The premise is that all women are in a permanent state of wanting to have a baby, and if they say otherwise, it must be under duress.

But this idea that women never truly want an abortion is a total and demonstrable lie.

In the U.S., 6 out of 10 abortion patients have already had a baby. They are fully educated in the joys and challenges of motherhood, and that knowledge is informing their choice to abort this particular pregnancy. In countries that really do have the social safety net that Mississippi is pretending exists here, abortion has not vanished. The abortion rates in countries like France and Sweden are comparable to the United States, even though they have much more generous maternity leave and child care policies. Wealthier countries do have lower abortion rates, but that's because contraception access leads to lower overall pregnancy rates. But as long as there's unintended pregnancy, there will be abortion.

Conservatives get away with this bad faith, because of a larger cultural prudery. There's a general unwillingness, even among a lot of progressives, to defend women's sexuality without caveat. Conservatives want to prop up this ideal of women as asexual beings who only have sex to please men and/or have babies. Abortion's popularity, however, exposes the truth: Lots of women have sex with men they don't want to have a baby with — either right now or ever.

Rather that just let women be, the Christian right wants to use abortion bans to punish women for not adhering to their sexist demands. Progressives should not let red herring arguments about maternity leave or child care distract us from that fact.