Will Supreme Court conservatives overturn Roe? Their casual contempt for women is not a good sign 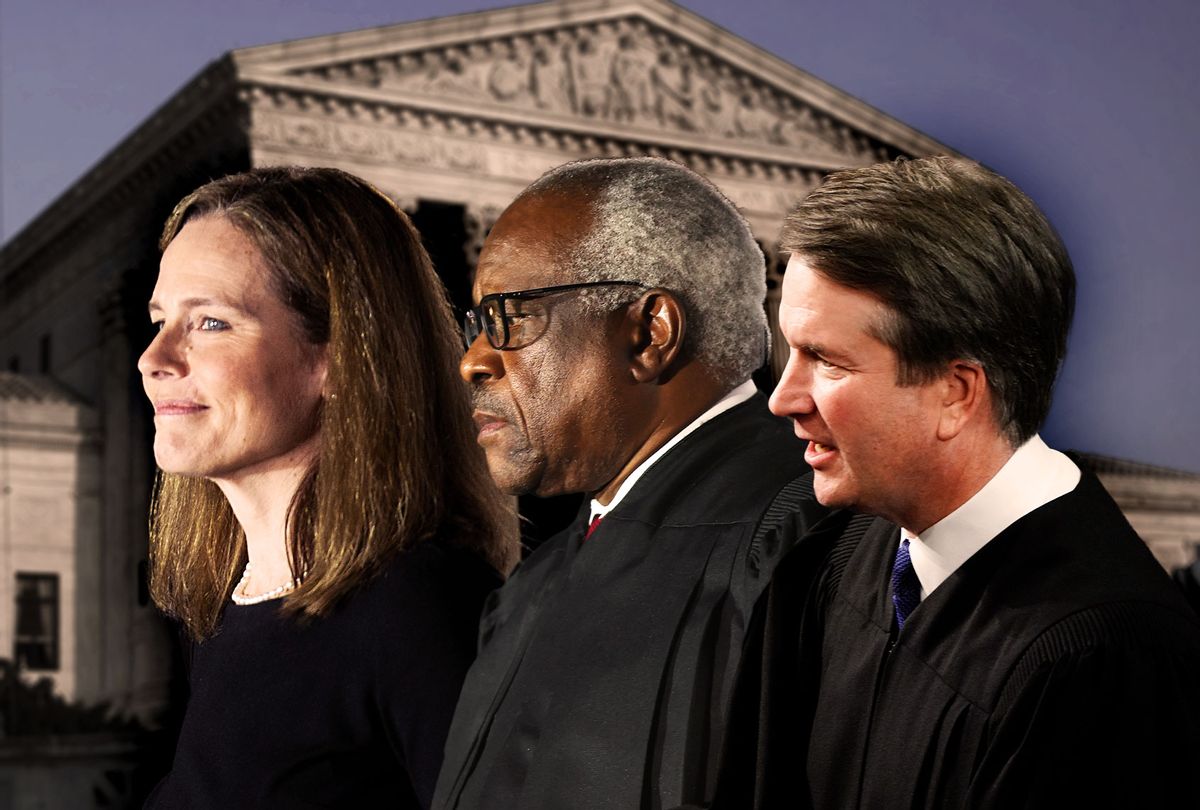 Despite all the legalese about "stare decisis" and "reliance interests," the abortion rights hearing held at the Supreme Court Wednesday morning came down to one question:  Can women's rights simply be disappeared, with the ease of shaking an Etch-A-Sketch?

Unfortunately, 6 out of 9 members of the Court seemed to strongly believe that yes, it's time to hit the reset button on that whole "treating women like full human beings" experiment after nearly 50 years, since Roe vs. Wade, of women having full human rights.Through the two hours of questioning in Dobbs vs. Jackson Women's Health, one word came to mind to describe the stance of the conservative judges: Contempt.

Wednesday's oral arguments were full of contempt for women's lives, contempt for women's intelligence, contempt for women's privacy and contempt for women's very humanity. To be sure, Center for Reproductive Rights lawyer Julie Rikelman and Solicitor General Elizabeth Prelogar repeatedly emphasized that women are complex human beings who have as much a right to liberty and the pursuit of happiness as anyone. But it was like talking to a brick wall of misogyny offered by the Republican appointees on the bench. The Court now seems almost certain, as was requested by Mississippi Attorney General Scott Stewart, to overturn Roe v. Wade next year.

Perhaps the most repulsive moment of the morning came courtesy of Justice Sam Alito, who is always ready to act like the biggest mansplaining creep in the highly competitive field of GOP-appointed judges. In response to Prelogar's argument that American women have come to rely on abortion rights, Alito sneeringly argued that the South had also come to rely on "white supremacy" after Plessy v. Ferguson, but that didn't stop the court from overturning it in Brown v. the Board of Education. Yes, you read that correctly: Alito compared a woman's right to control her own body to upholding Jim Crow.

And this was far from the only bad faith comparison offered by the conservative justices.

At one point, Justice Brett Kavanaugh ran down a long list of cases he felt like overturned historical precedent, in the way he clearly would like to overturn Roe — including Brown and, more recently, Obergefell v. Hodges, the case that legalized same-sex marriage. Prelogar did her best to rebut this claim, pointing out that these decisions to overturn precedent expanded human rights, and overturning Roe would take them away. But the conservatives don't seem inclined to view women as humans with rights, and so ignored this crucial point.

Those were the most egregious, but the inability of the conservatives to imagine women as real people behaving in discernibly human ways defined most lines of questioning during Wednesday's arguments. At one point, Chief Justice John Roberts explored the possibility of setting the national abortion limits at 15 weeks, which is the current Mississippi law under debate, instead of overturning Roe entirely. He dug into Rikelman about how 15 weeks should be enough "opportunity for choice" for women seeking an abortion, even though it's actually only about 11 weeks since the missed period. The implication, of course, is that anyone who needs that long is somehow too lazy or stupid to deserve rights. (Though apparently not to lazy or stupid to be a mother!) But, as Rikelman pointed out, poverty and other abortion restrictions often drive women to spend weeks trying to find the time and money to abort. In addition, a huge number of medically indicated abortions happen after the 15-week mark.

Amy Coney Barrett, the token Aunt Lydia of the 6 conservative judges, kept circling around the argument that women don't need abortion rights, because "in all 50 states, you can terminate parental rights" after giving birth. It was a question that only makes sense if one assumes women are merely ambulatory uteruses, with no feelings or internal lives at all. In the real world, however, pregnancy is a difficult process, not just physically, but emotionally. Pregnancy isn't a houseplant you stick in the corner of your house and ignore until someone comes to pick it up. You carry it with your body. People ask you about it — indeed, as anyone who has been pregnant can tell you, it's basically all people can talk to you about when you're showing. It causes all sorts of hormonal and emotional reactions, and giving up a baby your body has created is notoriously wrenching, even for those who are ready to do it.

RELATED: Think abortion rights is a "divisive" issue? Only to the political class

Barrett, who has kids of her own, should understand this. But other women don't seem to register as people to her. She even snickeringly compared forced childbirth to vaccination, as if a 3 second, risk-free shot has anything in common with the permanently life-altering experience of pregnancy and childbirth.

Realizing they weren't going to get very far with their conservative colleagues with arguments about women's humanity, the liberal justices largely focused on the issue of the court's reputation. The conservative justices have been openly defensive about (entirely correct) accusations that they are "partisan hacks," as Barrett unconvincingly swore she was not earlier this year. So the liberals centered much of their questioning around concerns that overturning Roe would further degrade the court's reputation in the public eye.

"Will this institution survive the stench that this creates in the public perception that the Constitution and its reading are just political acts?" Justice Sonia Sotomayor asked at one point.

But it's hard to imagine six justices are going to be that worried about being criticized in this way. They don't take women seriously as people, so it's unlikely they care much more for the opinions of people who do view women as full human beings. As with Kavanaugh whining and crying because he had to deal with a sexual assault accusation from Christine Blasey Ford, they are all likely to double down on their sense of grievance that they even have to waste time with the women-are-people crowd. Erasing women's rights will be as easy for them as stepping on ants.