When SCOTUS guts Roe: The covert plan to provide abortion pills on demand – and avoid prosecution 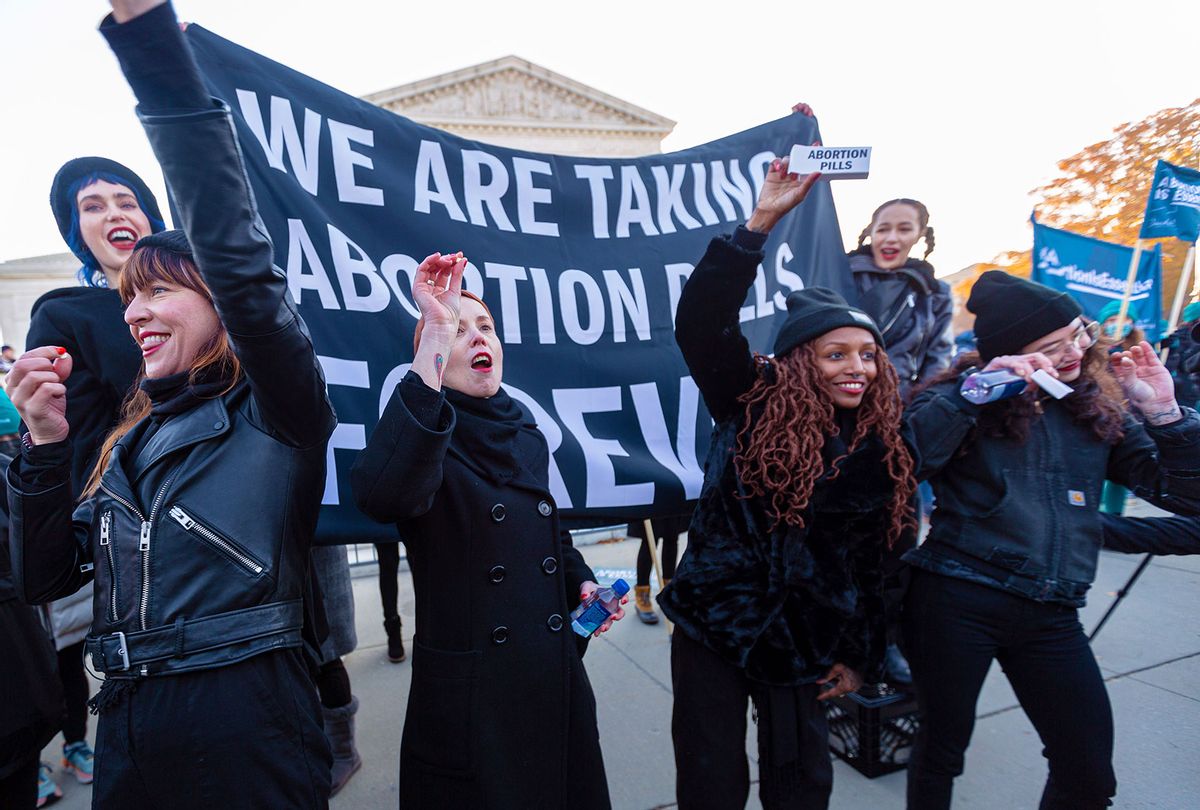 This past Friday, the Supreme Court upheld Texas' near-absolute abortion ban and gave their blessing to the novel enforcement mechanism, a Stasi-reminiscent system that depends on private citizens surveilling their neighbors and claiming bounties on anyone caught "aiding and abetting" an abortion. Despite some misleading headlines caused by a confusing decision, the bottom line is, in Texas, bounty hunters can still stalk people seeking abortion and legally harass and bankrupt anyone who helps them.

The decision was surprising because the court is also widely expected to overturn Roe v. Wade outright in June. Soon over two dozen states — including Texas — are expected to have laws that allow police officers to simply arrest people for abortion. Friday's decision not only creates a mess of legal headaches in managing the bounty hunters, it opens the door for blue states to use similar systems as a back door ban on guns, something California is already moving to do.

So why did the Supreme Court not just leave it to the cops, which is how abortion bans were enforced in the pre-Roe era? The answer may lie in the one enormous technological advance that happened in the near five decades of legal abortion: The abortion pill.

RELATED: I'm a doctor in Texas. Unscientific laws are preventing me from providing the best abortion care

Unlike in the pre-Roe days, when getting a safe abortion meant finding someone who could physically perform it, now pills can be used in the privacy of one's own home. As Dr. Daniel Grossman of the University of California at San Francisco told Salon, "online sites that are making the pills available" with "accurate information" and "good quality medication" allow for self-managed abortion to "be very safe and effective." Past images of the coathanger or the back alley abortionist could very well be replaced in the near future with pictures of a brown paper package purchased discreetly online — either from overseas pharmacies or, possibly, states where abortion will still be legal. This goes a long way to explain the right's interest in creating an army of snitches who will turn in their neighbors and friends for a $10,000 reward.

But some activists are betting on the pills as a way for abortion to not just be physically safe, but safe from law enforcement.

"We're having abortions. We're helping each other have abortions. You will never, ever stop us," Amelia Bonow of Shout Your Abortion told Salon. Her group, which started as an abortion storytelling project, responded to both the Texas abortion ban and to Dobbs vs. Jackson Women's Health — the case the Supreme Court is expected to use to overturn Roe this term — by focusing their advocacy on the pill.

During Supreme Court arguments over Dobbs earlier this month, Bonow and other activists stood on the Supreme Court steps and swallowed mifepristone, the first of the two-pill regimen to end an unwanted pregnancy. (Bonow reports she had minor but inconsequential bleeding afterward.) They put up art installations around the country and created a social media campaign, to highlight that the pills are "widely available online via telemedicine or by mail in all 50 states." They also set up a website directing users to sites that help patients find pills and use them safely. Some, like Aid Access, even have helpful videos explaining how to use the pills — and are hosted overseas, outside of the reach of U.S. law enforcement.

Bonow promised more actions to come to make the pills easier to get and use. She is inspired not just by those pre-Roe underground abortion providers like the Jane Collective, but also ACT-UP, who challenged the medical gatekeeping that kept HIV drugs out of the hands of people who needed them in the 80s.

Experts in the history of illegal abortion, however, have their concerns. The pills themselves are "very, very safe," explained Dr. Carole Joffe, a UCSF colleague of Dr. Grossman's who wrote "Doctors of Conscience: The Struggle to Provide Abortion Before and After Roe V. Wade." Indeed, as she noted, there's extensive evidence that women are already doing at-home abortions this way. One major study shows that 7% of women 18 to 49 have attempted self-abortion.

However, "the huge difference between then and now is the legal surveillance," Joffe said. In the pre-Roe era, there simply wasn't "the extraordinarily well organized anti-abortion movement we have now, so people could take chances that I think will be much harder to take now."

Leslie Reagan, a University of Illinois at Urbana-Champaign professor and author of "When Abortion Was a Crime: Women, Medicine, and Law in the United States, 1867-1973" concurred. She notes that abortionists mostly got caught pre-Roe if a patient was injured and "interrogated by doctors and nurse and police" at the hospital. Now, however, "the potential for surveillance is so much higher with the internet and our phones." She also argued that the Texas law, which applies to anyone who "aids and abets" an abortion, could have a chilling effect on information-sharing about how to get safe pills.

Slate legal expert Dahlia Lithwick also believes the future will be worse, legally speaking, than the pre-Roe era because the religious right is far more interested in "punishment for women who endanger their pregnancies" than law enforcement was before 1973.

This isn't just conjecture. Women are already going to prison, after being accused of doing something to cause miscarriage or stillbirth. National Advocates for Pregnant Women has documented at least 1,254 cases of women being arrested or detained under such accusations. In one famous Indiana case, a woman named Purvi Patel was convicted of "feticide," with prosecutors using her text messages mentioning abortion drugs purchased online. Her conviction was later overturned because abortion is, at the moment, still legal. But if Roe is overturned, such convictions may very well stand, especially as states expand their anti-abortion laws.

Bonow is well aware of the legal dangers, especially for "the most marginalized among us," such as low-income and young women, women of color, and LGBTQ people. But that is why her group isn't just focused on sharing information on physical safety, but on "ways that people can mitigate their legal risk," such as using tech services that make online activity harder to trace.

"We need to talk about it because a whole lot of people are going to need to have illegal abortions," Bonow noted. Indeed, all prevailing evidence shows that banning abortion does little to actually stop it. On the contrary, countries that ban abortion tend to have higher abortion rates than countries where it is legal. Her hope is that activists can fight "to make sure that you get what you need and evade criminalization in the process."

Doctors have a role to play in this. On Twitter, Dr. Grossman floated the idea of doctors providing advance provision of pills, in response to sex advice columnist Dan Savage suggesting stockpiling. "Advance provision of abortion pills before you need them makes a lot of sense," he wrote. "Mifepristone has a shelf life of about 5 years, and misoprostol has a shelf life of about 2 years."

As Grossman explained to Salon, some doctors already do this for patients who are traveling overseas for a long time, especially in places where the law or lack of resources makes the pills hard to get in a pinch. California has already moved to enhance patient confidentiality protections in anticipation of patients who obtain pills in their state for use in one where abortion is banned.

Dr. Grossman also suggested that doctors themselves need to be educated on how to better protect patients. Once abortion is banned, he notes, "some of this is going to fall on emergency department clinicians," because patients who show up with rare complications — or, in some cases, are just worried — after taking abortion pills at home.

Safety is, of course, the main impetus for these discussions on evading abortion bans. As long as people enjoy having sex — which will be forever — there will be a need for abortion, and the only real question is whether they are safe or not. But there is a political angle, as well.

Bonow sees the "visible culture of defiance and of rejection of these laws" as a way to build more political will, which is the only hope of ever overturning abortion bans. As Reagan noted, the "visible social movement and visible law breaking" of activists like the Jane Collective and Pat Maginnis, who would deliberately get arrested for passing out information on safe abortion in the 60s, helped build the momentum that led to Roe v. Wade in the first place. This could also help answer the question that has been plaguing progressive activists for the past year: How to defeat the growing sense of helplessness on the left.

The four pillars of activism that are always offered to people who want to help — vote, donate, legal protest, and calling your representatives — have done little to stem the rising tide of authoritarianism. Voting rights and democracy are still imperiled. Abortion is about to be banned across huge chunks of the country. Activists are going to have to get more creative about actions people can take if they want to shake folks out of their malaise. Perhaps campaigns like the Shout Your Abortion pill campaign can generate new ideas about how to resist, and restore hope that actions you take can still have a real impact on the world.