Youngkin didn't need Trump for a bigotry-based campaign, but McAuliffe couldn't get out deflated voters without him 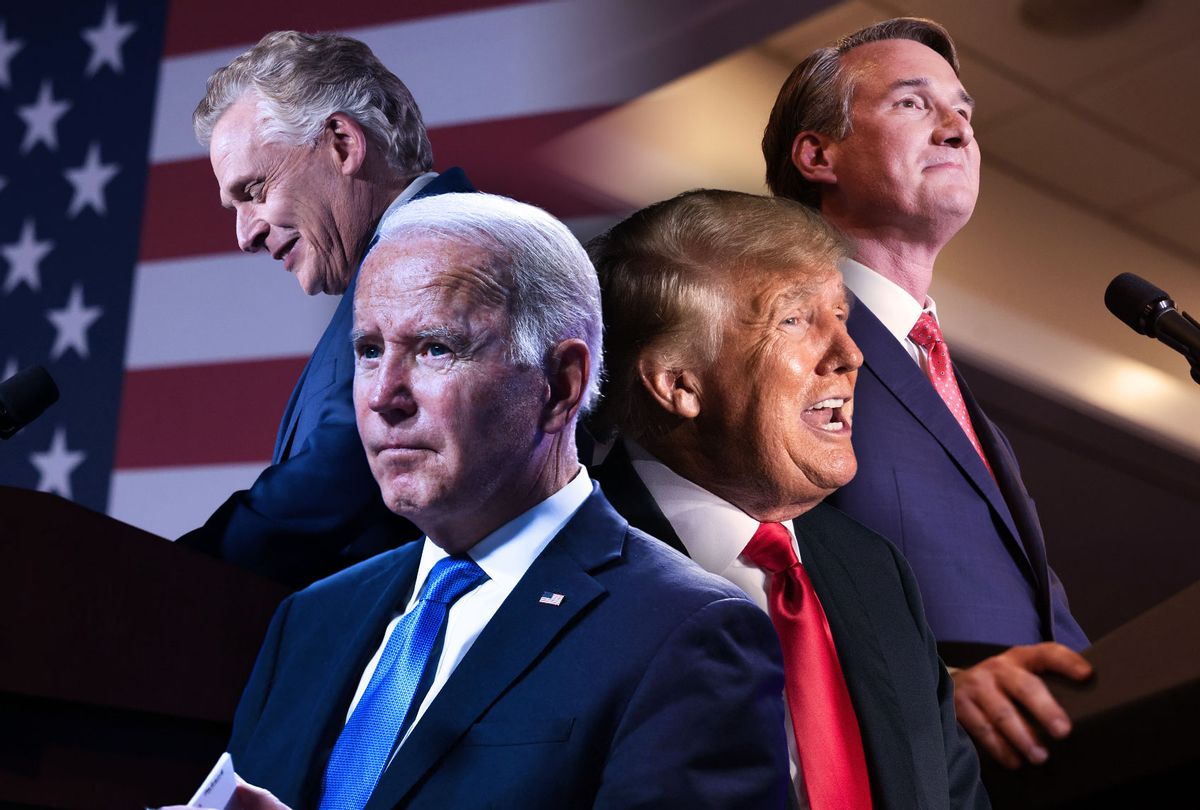 Tuesday's Virginia race is the fertile soil from which a thousand hot takes will bloom, but in the end, it really did come down to voter enthusiasm. People who voted for Donald Trump in 2020 were fired up and ready to vote for Glenn Youngkin. It's not because they are infatuated with the milquetoast mini-Trump in a sweater vest. It's because they were drunk on racist hysterics and eager to stick it to the Democrats. A lot of people who voted for Joe Biden in 2020 — 33% — however, stayed home. Meanwhile, Republicans only saw a 15% drop-off in turnout.

In the end, Youngkin got 85% of the vote share Trump got the year before, and Democratic candidate Terry McAuliffe only 66% of Biden's 2020 share. Swing voters exist, but they are a small percentage of voters. This election came down — as they often do — to turnout. Republicans turned out and Democrats, about a third of them, did not.

This was all entirely predictable.

Republicans are reliably easy to rile up with two main weapons: bigotry and resentment of liberals. The performative freakout over trans rights and "critical race theory" in public schools was built on easily debunked lies, and will be dropped the second it's no longer electorally useful. But none of that matters, because Republicans live in a cloistered media ecosystem where kids reading "Beloved" in high school and imaginary rapists-in-dresses jumping strangers in the bathroom are treated like far more pressing threats to society than climate change or wealth inequality.

One thing the Virginia race does end is the debate over whether there can be a Trumpism without Trump. The answer is a very definitive "yes."

As I've long argued, despite Trump's ability to get attention, he personally is not all that important to the movement that's grown up around him. His voters see the same thing liberals do, which is a long-winded narcissist whose incuriosity is only equaled by his sadism. They just don't care, because they see him as a useful vehicle for their agenda, which can be boiled down to being very racist while triggering the liberals. Since Trump is very good at both of those things, his voters can overlook what they don't like about him.

But clearly, Republicans don't need Trump in order to rile up their voters. All they need is to give the base opportunities to be racist jerks.

Youngkin and his surrogates offered up such opportunities on a platter, from the drama queen antics at school board meetings to the lame "let's go Brandon" meme that Republican voters clearly think is just hee-larious. Meanwhile, Democratic leaders can't say they weren't warned about the enthusiasm problem.

As I've been writing about both at Salon and in my Standing Room Only newsletter, the signs that Democratic voters were checking out have been as obvious as a billboard in Times Square. A Morning Consult poll last month showed a whopping 92% of Republican voters said they're fired up for future elections, while only 70% of Democrats said the same. That hypothetical 22 point gap in enthusiasm in a poll translated to a real-life 19 point gap at the Virginia ballot box on Tuesday. As Karen Tumulty in the Washington Post pointed out in mid-October, the female voters "whose engagement and activism fueled the gains that Democrats made during Donald Trump's presidency, are increasingly tuning out politics." I'd argue that the huge tip in the polls of female voters away from Democrats and towards Republicans reflects this mass tune-out, by Democratic women, more than a sudden switch in party affiliation.

RELATED: Democrats hit the panic button. Is it too little too late for Joe Biden?

To be certain, getting voters fired up in an off-year election is always an uphill battle for the party that controls the White House, as Derek Thompson of the Atlantic pointed out.

For the every spicy take on Virginia you read (CRT is the new southern strategy, all politics is education politics, etc) spare a thought for the electoral thermostat.

The WH's party has lost *all but one* VA gov race since the 1970s. That's a 1-11 record. @SteveKornacki pic.twitter.com/N7IiWVMLmV

But this doesn't let the Democrats off the hook as much as Thompson is insinuating. On the contrary, it's a reminder that it was entirely predictable that there would be an enthusiasm drop-off as the result of time-tested partisan complacency. That's doubly true without Trump on the ballot. For what are very good "drink bleach" reasons, mind you, Trump was an excellent get-out-the-vote motivator the Democrats. But without Trump to vote against, Democrats needed something to fire up their base. And what they offered was a whole lot of nothing.

The biggest thing is the pandemic, and there's no use in denying it.

Biden dragged his feet on vaccine mandates for months, and even after his big announcement rolling out new ones in September, the actual deadlines for most people to comply are non-existent. And so the virus is still spreading, albeit at a slowly dropping rate. People, especially in blue areas where taking the pandemic seriously is a matter of partisan identity, are still masking up and curtailing their social activities, even (and frankly especially) in low transmission areas where such measures are less necessary. No wonder Democratic voters are depressed and demoralized.

Having failed at curtailing the pandemic through the only tool that was ever going to work — vaccine mandates — Democrats then reinforced their reputation as do-nothing politicians by failing to pass any of Biden's ambitious agenda items.

There's been no movement on voting rights or reproductive rights or climate change. Biden's even failing on his biggest issue, major economic reforms to make life easier and fairer for workers. The Build Back Better plan languishes in a state of purgatory, kept there by centrist Democratic senators who clearly plan to keep coming up with excuses to put off the vote until it's killed off forever. And what those centrists are killing off is really popular stuff!

Democrats even failed to utilize their best weapon, hatred of Trump, for turnout purposes.

Despite the long public record of evidence pointing to a conspiracy between Trump and his allies to steal the 2020 election, he and his compadres continue to walk around free men. The Justice Department won't even arrest Steve Bannon, despite the fact that he's in contempt of Congress. Justice after the coup attempt may not be the top issues voters cite in polls, but this failure to do anything just adds to the overall sense of Democratic impotence.

Plugged-in voters understand that the solution to this problem is to elect more Democrats, to create majorities strong enough that the Joe Manchins and Kyrsten Sinemas of the world can't derail the agenda. But low information voters, the kind who are most likely to tune out during an off-year, only see that Democrats can't get squat done and so they see no reason to vote. As one Democratic pollster told the Washington Post, voters are saying, "It doesn't matter who we elect, it's all the same."

Also predictable: That Republicans would fire up some nutty culture war lies and start a racist panic (to be dropped the second it is no longer useful). They do this every time, as those of us who remember long-forgotten issues like "the caravan" and the "Ground Zero mosque," which were once treated by Republicans as the most pressing issues of our time. Republicans signaled for months ahead of time that they were going to make transphobic urban legends and this bullshit about "critical race theory" the center of the campaign. But instead of hitting back hard and fast, Democrats let the situation fester. It was only at the last minute that McAuliffe's campaign started pointing out that "critical race theory" is a pretext for what is outright government censorship, no different in its origins than the Nazi book burnings. By then, however, it was a matter of too little, too late — the Republican spin already dominated the narrative.

There's a tendency in both the mainstream media and the hot take industry of social media to reduce the complex math of elections to simplistic narratives about voters "switching" sides. But that's really not how these things work. A bunch of Biden voters didn't see a few school board tantrums on the local news and suddenly become Tucker Carlson fans. The people who have always been bigots were hella fired up. A huge chunk of the "everyone else" category that constitutes the Democratic base is demoralized and checked out.

Getting racists to stop being fired up by race-baiting is probably a lost cause. So Democrats have to figure out how to outnumber them — and that requires getting their own people energized. The first step is to give would-be Democratic voters something to vote for, especially when there's no cartoon villains like Trump for people to vote against.