Why Joe Biden remains hostage to the GOP's death cult

Vaccine mandates are the only way to win the COVID wars. President Biden can just end this now 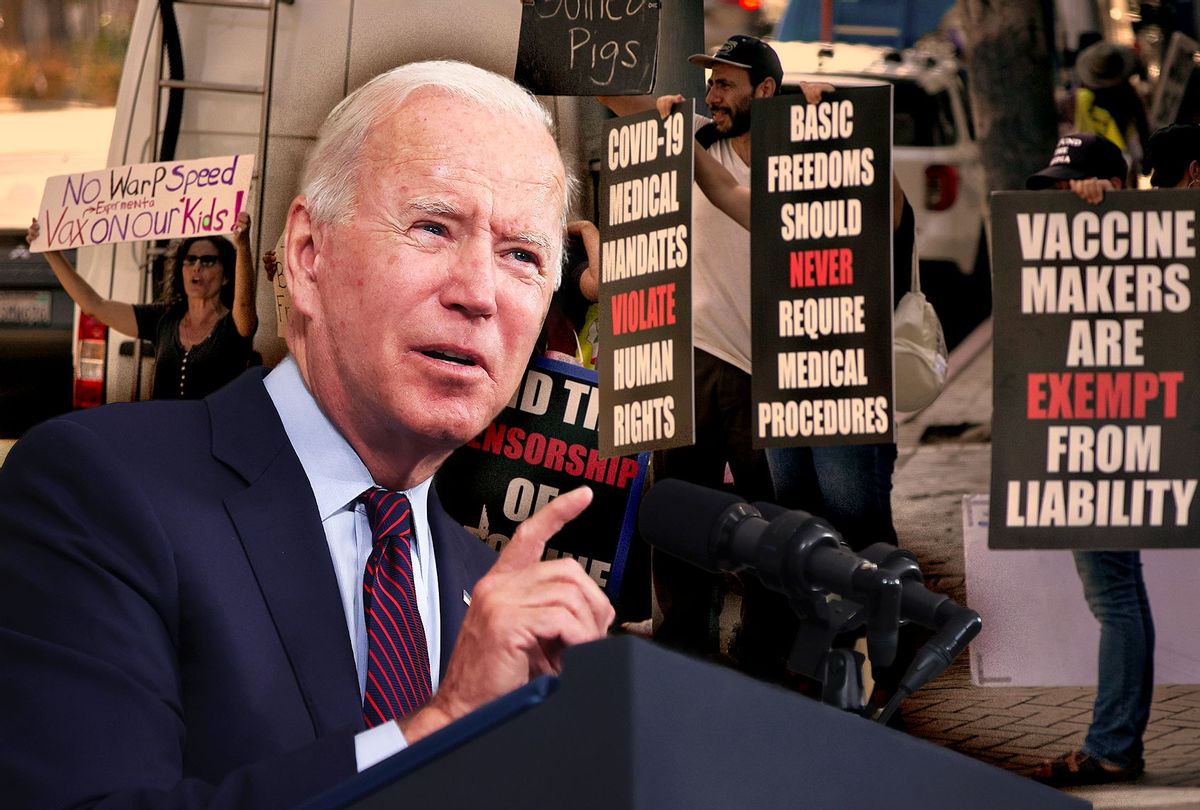 Joe Biden | Demonstrators opposed to masking and mandatory vaccination for students gather outside the Los Angeles Unified School District headquarters as board members voted that all children 12 and older in Los Angeles public schools must be fully vaccinated against COVID-19 by January to enter campus on Thursday, Sept. 9, 2021 in Los Angeles, CA. (Jason Armond / Los Angeles Times via Getty Images)
--

President Joe Biden's administration, like the rest of those in non-idiot America, is quickly getting fed up with the antics of the right-wing death cult that has made their "right" to spread COVID-19 the center of their political identity.

On Monday, Attorney General Merrick Garland announced that the Department of Justice will be taking measures to address "a disturbing spike in harassment, intimidation, and threats of violence" against public school employees at the hands of right-wingers who demand schools do nothing to prevent outbreaks. The administration is also fighting Florida's Republican Gov. Ron DeSantis for refusing to cooperate with federal programs to fight COVID-19 and Arizona's Republican Gov. Doug Ducey for blocking COVID-19 mitigation measures in schools.

Meanwhile, right-wing media continues to heavily push the idea that being anti-vaccine is the great culture war of our time.

Tucker Carlson keeps hyping the lie that vaccines are dangerous, most recently by hosting conspiracy theorist and Republican Sen. Ron Johnson of Wisconsin on his show to flog the idea taking medically useless horse paste is better than listening to medical experts. Media Matters, a left-leaning media watchdog group, has carefully documented how Fox News has undermined vaccines on a nearly daily basis for six months, hyping a bunch of fake "cures" and "treatments"  — including bear bile, vaping, and sunlight — as alternatives to vaccination.

The death toll from this right-wing politicization of the pandemic is staggering.

Over 100,000 people have died from COVID-19 since mid-June when the vaccine was available for free to anyone who wanted it. That number doesn't even include all the people who have died because COVID-19 patients are overcrowding hospitals and making it difficult for other patients to get timely care. Meanwhile, the anti-vaccine protests are just getting uglier and more violent, which is why the Biden administration has been forced to act.

Hey @HawleyMO, just circling back to see if you saw the threats to school officials across the country. We made a montage for you in case you didn't. pic.twitter.com/6OSROrY3Bq

The White House has been desperate to depoliticize the pandemic since Biden first stepped into office, and for good reason. The right-wing grandstanding about it is killing people and sowing chaos (which is no doubt the point). But Biden's initial strategy of trying to make nice and appeal to people's rationality has clearly backfired, creating an opportunity for right-wingers to dig their heels in and make vaccine refusal central to their war on the rest of the country. So even as the administration has finally started to embrace vaccine mandates, they still don't seem to understand that the best way to finally end the COVID-19 culture war is to roll out vaccine mandates far more aggressively than they are doing.

This may sound counterintuitive. Wouldn't more aggressive vaccine mandates cause an ugly backlash from the anti-vaccination set?

But the move would be ripping-the-bandaid-off style pain: sharp but over quickly. The current strategy of slow-rolling the vaccine mandates is prolonging the controversy, giving the right months and months to make hay they wouldn't have if the mandates would have only come down more swiftly. Faster and more aggressive mandates will get shots into arms sooner, causing the pandemic to wind down and forcing right-wing media to find some other issue to create needless political drama over. (Dr. Seuss and Mr. Potato Head are feeling neglected!) The vaccine issue only has political salience because COVID-19 transmission numbers are still high, giving conservatives the chance to feel they're "owning the liberals" by prolonging the pandemic. Take that from them, and they'll move on to something else.

Early results from vaccine mandates demonstrate that loud-mouthed anti-vaxxers talk a big game, but that meaningful opposition to vaccines evaporates in the face of real consequences. Time and again, the prophesized mass resignations in the face of employment-based vaccine mandates don't materialize. The vast majority of the unvaccinated just shut up and get the shot already. In New York, mandates on health care and public school workers did not cause major staffing shortages. Instead, unvaccinated employees rushed at the last minute to get the shot, bringing vaccination rates up to 92% among health care workers and 96% among teachers. Private employers are also finding that mandates jack the vaccination rates up to over 90% pretty swiftly.

The vaccine inoculates the body against the coronavirus, but it should also be understood to inoculate the mind against anti-vaxx theatrics.

Resisting the vaccine only makes sense before you get it. Flaunting an unvaccinated status to trigger the liberals is a lot less fun when you're not actually unvaccinated. But most importantly, the pandemic just won't be a flashpoint for political theatrics if case rates start going down rapidly, which will happen only if shots start going into arms at a faster pace.

Yet, while the Biden administration has accepted the necessity of vaccine mandates, they are still holding back from the aggressive enforcement needed to actually work on the anti-vaxx set. For instance, while Biden announced a sweeping mandate affecting every business with over 100 employees, the actual rollout has been bizarrely slow. It's been almost a month since the announcement, but the actual policy details haven't been released and there is no timeline for when employers should actually start complying. Unfortunately, as the New York example shows, holdouts will wait until the last minute to get their shot. Slow-walking this policy is deeply foolish, and dangerous, to boot — every day that there's no deadline to get the shot, tens of thousands of people are needlessly infected.

The failure to ban the unvaccinated from planes is a similar oversight. The administration has a real opportunity here to force millions of people to choose between holiday plans or their vaccine resistance. Not only would this policy save thousands of lives, but it would also depoliticize the COVID-19 discourse at family dinner tables across the country. Conservative relatives would be vaccinated and thus far less likely to grandstand and start fights over this issue. That depoliticization is significant and would echo through the national discourse.

Ultimately, the right's culture war over COVID-19 may burn itself out. Case rates are currently falling across the country, in no small part because vaccine refusers keep catching the virus and developing immunity the hard way. There may be another surge in the winter, but there's a very real chance that, by the midterms, case rates are low enough that masks are gone and the issue doesn't have the political salience the parasitic culture warriors need to keep their tantrums going.

Still, why risk it?

Vaccines will wind down the pandemic much faster than letting right-wing Americans inoculate themselves, one infection at a time. The political fights over COVID-19 don't end until the pandemic does. And the more aggressive the vaccine mandates, the sooner that will happen. Mandates won't just save lives, they'll rid us of this idiotic death cult culture war once and for all.