Gov. Hochul didn't back down despite threats of backlash. When it's a jab or your job, nearly all will pick the jab 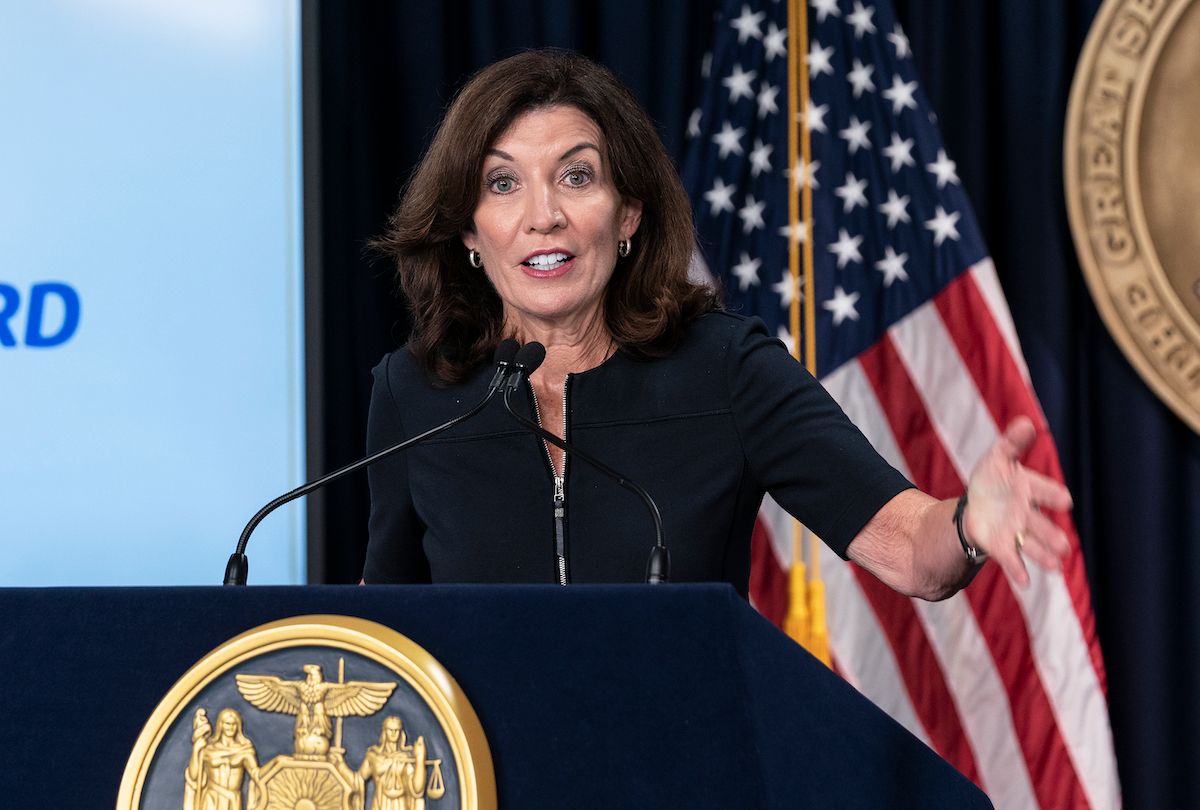 As pressure mounted on President Joe Biden to institute vaccine mandates — and especially after he went ahead and did it — the public got drenched in media warnings that he had made a grave mistake and it would backfire badly in the fight to end the COVID-19 pandemic.

On CNN, Jake Tapper criticized Biden for his supposed insensitivity to the unvaccinated, saying, "He's scolding the people that are being lied to, as opposed to the liars." He implored Biden to "educate" people instead of using this forceful approach, as if the willfully unvaccinated were innocent victims instead of people who seek out disinformation on purpose.

This follows another Washington Post op-ed, from July, headlined, "Vaccine mandates will backfire. People will resist even more." Conservative professors Taylor Dotson and Nicholas Tampio argue that "persuading Americans" is "more politically tenable and would better serve [Biden's] aim of bringing the pandemic under control."

"But bullying the unvaccinated into getting their shots isn't going to work in the long run," Yasmin Tayag warned in the Atlantic, while both admitting that "vaccine mandates increase vaccination rates" while also claiming "this approach may eventually backfire."

New York was the first big test, as the state implemented a major jab-or-job mandate for health care workers that took effect Monday. In the days leading up to the deadline, doomsaying in the media grew to a cacophony, with the press repeatedly echoing the GOP talking point that tens of thousands of health care workers would rather lose their jobs than let the Gov. Kathy Hochul, a Democrat, tell them what to do.

Tuesday morning, however, the New York Times headlines were singing in a different key: "Thousands of New York Health Workers Got Vaccinated Before Deadline" and "Health care workers in New York rush to get vaccinated, averting a staffing crisis."

Indeed, so many people were vaccinated at the last minute that the percentage of health care workers receiving at least one vaccine dose is now 92% for the state's hospital employees. For nursing home workers, the percentage shot from 84% to 92% by Monday. And that's just the preliminary state data. When full reporting is in, it may be even more robust. Certainly, individual hospital systems have shown that the mandates are working. In Rochester, one hospital "warned patients to expect longer wait times for routine appointments as the deadline loomed last week." But by Monday, they had brought "their staff vaccination rate to 95.5 percent," and only 300 of 16,000 employees are expected to be fired.

This reflects what has happened in other workplaces that have imposed mandates, most notably United Airlines, which brought their vaccination rate to 97% before the deadline of their mandate.

To be fair, it's not ridiculous to believe that large numbers of people would rather lose a job than get the vaccine.  Thousands of people are quite literally dying every week, many because they absorbed the idea from Fox News and social media that getting the jab makes you a bad Republican. COVID-19's hot spots are determined mostly by partisan affiliation, to the point where it's contributing to the population decline in redder parts of the country. If people are willing to die on this hill, why wouldn't they be willing to lose a job?

Mostly because when it comes to consequences, certainty matters. People can convince themselves their own risk of dying of COVID-19 is low. When the risk of losing a job is 100%, though, that's a lot harder to argue away. Especially if getting a job in your field somewhere else is a huge hassle, or even impossible due to industry-wide vaccine mandates.

That so many people held out to the very last minute to get their vaccine is evidence of this. For some, no doubt, it was procrastination. Considering the partisan nature of the vaccine debate, it's also likely that significant numbers of these folks are conservatives waiting to see if Hochul was serious about the mandate or if she could be intimidated into backing down. When she didn't retreat, they chose their jobs over "convictions" about vaccines that in many cases manifested, as if by magic, mere months ago.

Indeed, the entire discourse around labor rights and labor shortages, especially in health care, has been a misleading one. Warnings that vaccine mandates could lead to labor shortages only work if one ignores the far bigger labor issue right now, which is COVID-19 itself. There is a national burnout problem caused by the pandemic, and no one is more impacted than health care workers. Nurses, doctors, and other health care workers are working long hours with no vacation, and watching huge numbers of people die regularly, due to COVID-19. A survey by the American Medical Association found that nearly half of health care workers report burnout and 38% are experiencing anxiety or depression.

Real relief for health care workers comes through ending the pandemic, and that cannot be done without mass vaccinations. And that is going to mean vaccine mandates. As much as a small minority may whine about the mandates, in both the short and long run, the mandates will make the lives and jobs of health care workers significantly less stressful.

The media's unfortunate embrace of the bad faith right wing framing about the "right" not to be vaccinated has also distracted from the real issue regarding mandates and labor rights: Workplace safety. Vaccinated people have a large amount of protection from their unvaccinated colleagues, but with the delta variant, breakthrough infections are still a real risk. For health care workers with children under 12, who cannot be vaccinated yet, the risk of passing on a breakthrough infection from an unvaccinated colleague to family members is especially vexing.

Those who support labor rights should view vaccine mandates in the same light as we view other workplace health and safety standards. From standard "wash your hands" hygiene regulations to rules against sexual harassment, a central part of labor rights has always been requiring fellow workers to behave in ways that make the workplace safe. Vaccine mandates are no different, which is why Republicans never objected to them before they decided it was politically strategic to needlessly spread a pandemic in hopes of undermining Biden's presidency.

Clearly, millions of Republican voters were willing to listen to bad faith trolls like hosts on Fox News who discourage vaccination while clearly getting vaccinated themselves. The notion that there was ever a "persuasion" strategy that could overcome the interminable desire among GOP voters to "own the libs" was always a joke. But now we have concrete proof, in the form of a last minute stampede among health care workers to get the vaccine, that mandates work. Employers and political leaders across the country should not flinch from enforcing mandates by firing anyone who doesn't get a shot. And the Biden administration, witnessing how effective New York's mandate is, should immediately expand the federal vaccine mandates. They can start by banning the unvaccinated from flying, before the vaccine resistors start spreading COVID-19 for the holidays.