Stop the malarkey, Biden: Ban the unvaccinated from airplanes already 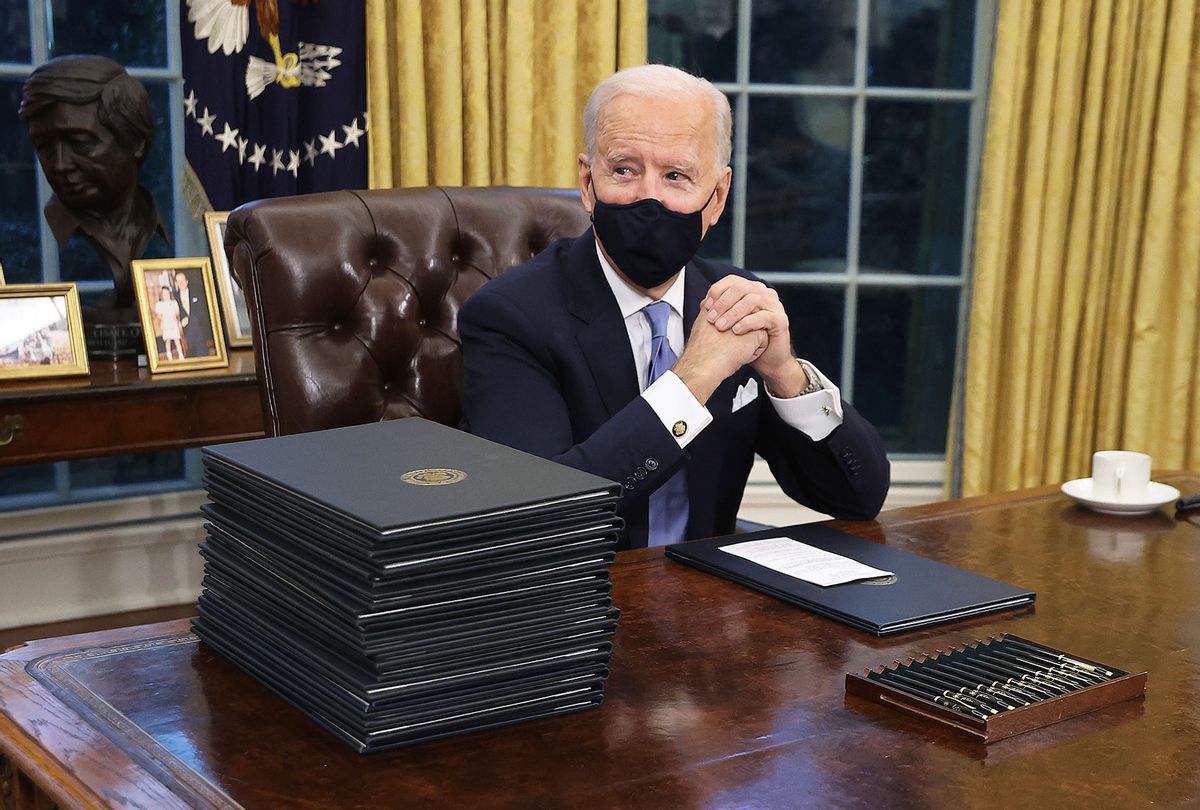 U.S. President Joe Biden prepares to sign a series of executive orders at the Resolute Desk in the Oval Office just hours after his inauguration on January 20, 2021 in Washington, DC. Biden became the 46th president of the United States earlier today during the ceremony at the U.S. Capitol. (Chip Somodevilla/Getty Images)
--

On September 18, a group of MAGAheads plans to "rally" in Washington D.C. on behalf of the Capitol rioters who are facing charges for their crimes, deeming them "political prisoners." There is a dispute about how worried folks in D.C. should be about this event. Journalists who follow the insurrectionist movement closely don't think many people will show up. Law enforcement, however, is clearly worried, "taking no chances" and putting up fences around the Capitol and keeping the National Guard on standby.

Regardless of what happens, there is one clear moral to the story: President Joe Biden should have banned the unvaccinated from flying weeks ago.

Sure, the reason he should have done it is to save lives, stop the spread, and help return American life back to normal. But, hey, thwarting the travel designs of the fanny pack fascists would have been a nice added bonus.

Jokes aside, the recent victory of California's Democratic Gov. Gavin Newsom over a recall effort instigated by the "get COVID-19 to own the libs" crowd should be a sign to Democrats that they need not be afraid of ruffling the feathers of the willfully unvaccinated. (Though always wear a mask and carry hand sanitizer when around such ruffling.) The Republicans behind that recall effort made a big bet that they could convince pandemic-weary Californians to punish Newsom for the continued hassles of mask mandates and other pandemic mitigation measures, even though there haven't been meaningful lockdowns in California for months.

Newsom's campaign, on the other hand, bet that Californians, the majority of whom are vaccinated, would blame right-wing COVID-deniers for dragging out the pandemic by refusing to get vaccinated. Newsom campaigned heavily on a message about the importance of pandemic mitigation measures, running ads highlighting how his main opponent, Larry Elder, promised to rescind vaccine mandates for school and health workers that Newsom had implemented. Newsom's strategy worked, leading to a landslide victory with 64% voting "No" on the recall in an election which, mere weeks ago, was looking like it might be too close for poll predictions. Exit polls found that only 30% of voters thought Newsom's COVID-19 policies were too strict.

The Biden White House clearly has been paying attention to polls that show growing support for vaccine mandates, which no doubt contributed to the decision last week to roll out executive orders mandating vaccines for federal workers, health care workers, and any company with more than 100 employees. The announcement is broadly popular, with 62% of Americans backing Biden's plan. It's no surprise, as 76% of adults have received at least one shot, but are being forced to adhere to mask mandates and other social distancing protocols because of vaccine refusers.

"We've been patient, but our patience is wearing thin," Biden said while announcing the executive orders.

Biden's clear understanding of the resentment growing amongst the vaccinated is why it's all the more confusing that he still won't ban the unvaccinated from boarding an airplane. Such a move would be the quickest, cleanest way to send the message that remaining unvaccinated is not a viable option any longer. Getting the ban in place before the holiday travel season would give people both an incentive to get it done and do it in an urgent fashion. It would also help control the spread of the coronavirus by limiting the travel options of the unvaccinated.

On top of saving lives, banning the unvaccinated from planes is popular, with 61% of Americans supporting it in a recent Gallup poll — making vaccine mandates for planes even more popular than vaccine mandates for workplaces or even dining in restaurants. It would also be a more egalitarian move, making it so rich anti-vaxxers can't evade the mandates that are coming down on ordinary workers.

The political pressure is mounting, as well.

On Friday, Dr. Anthony Fauci, one of Biden's top health advisors, came out publicly in favor of banning the vaccinated from planes. Last week, Rep. Don Beyer, a Democrat from Virginia, introduced a bill that would require proof of vaccination or a recent negative COVID-19 test for travel by train or airplane. But such legislation is unnecessary, as the same power Biden used to mandate masks for air travel can be used to mandate vaccines.

When asked why Biden hadn't instituted a vaccine mandate for air travel yet on Pod Save America on Monday, White House Chief of Staff Ron Klain responded by saying that the administration continues to look at it, but they are concerned  about the "burden on the vaccinated having to show proof every time you go on to an airplane, having to wait at longer lines in TSA."

Of course, that is a political way of saying they're worried about some redhat yahoos clogging up the airport with public tantrums about being turned away by the TSA. And no doubt that will happen — though probably less often than one would fear. Such stunts require purchasing an airline ticket for the sole purpose of filming yourself throwing a fit and then not flying anywhere. It's a lot of upfront costs even for the most dedicated clout-chasers of right-wing social media. But sure, such incidents will still cause delays of probably 10, 15 minutes for the unlucky travelers who fly on those rare days.

So the administration shouldn't worry that travelers will blame them. On the contrary, the viral videos of grown adults having childish meltdowns in airports will only hurt Republicans, as the vaccinated majority will only get more fed up with these right-wing antics.

And if they're really worried about it, the administration can put out a travel advisory telling people to build more time in for security lines, just as we did in the years after 9/11. In the grand scheme of sacrifices made to help end this pandemic, giving yourself an extra half-hour to make a flight is a minor one that most travelers will happily abide by.

The Biden administration clearly can read a poll, which is why they've started to lean harder into vaccine mandates and political messaging that, correctly, blames the willfully unvaccinated for prolonging a pandemic that should be in the rearview mirror already. The hesitance to add vaccine mandates for travel is, under the circumstances, baffling.

Time is running out.

The latest date that people can start the two-shot vaccine protocol, in time to be fully vaccinated to fly on the day before Thanksgiving, is October 27. That's less than 6 weeks from now. The sooner that the holdouts realize they need to get their shots to salvage their holiday travel plans, the better. The time to ban the unvaccinated from planes is now.