In a choice between mask and vaccine mandates, only one can restore our sense of normalcy 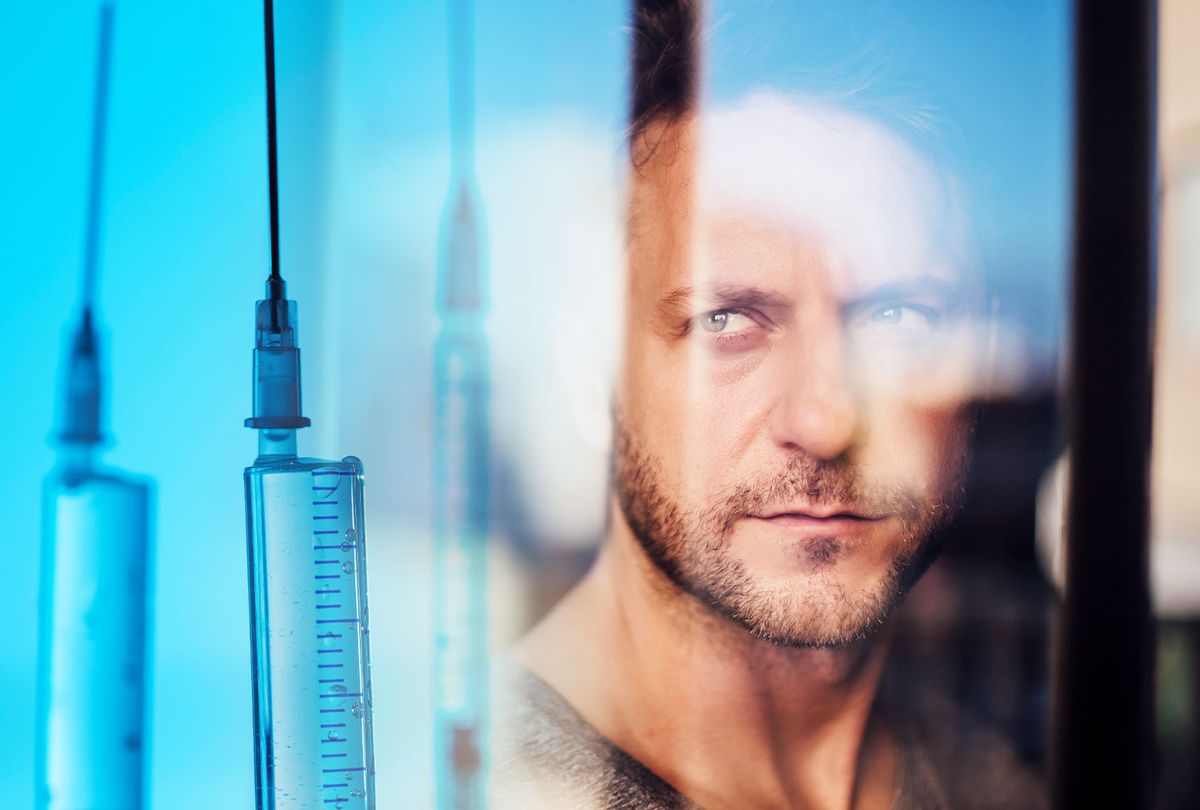 Everyone in the vaccinated world had that thing, the thing they missed most of all that they couldn't wait to get back once the COVID-19 shot set them free. Performers wanted to get back on stage. Engaged couples had their wedding plans back on. Game enthusiasts couldn't wait to get off Zoom and back to the tabletop. Some folks just fantasized about sitting in a bar or coffee shop again.

I really wanted to get back to my spin class. And for a couple of months, I did just that. Exercising at home for the past year was fine, but nothing beats a 45-minute spin class for leaving one red-faced and sopping wet with sweat. But it's that "sopping wet" part that became a problem this week when the gym sent out a memo bringing back their indoor mask mandate. This isn't a 5-minute jaunt in a grocery store with a mask. Exercising with a sweat-soaked mask is like being waterboarded. So I canceled my class and sent a polite but angry note to my gym. Philadelphia's new regulations allow businesses to choose between mask and vaccine mandates, and they chose poorly, penalizing those who did the right thing to coddle those who refuse. Masking the already vaccinated to protect the unvaccinated helps a little, but is a little like trying to cover someone in a rainstorm by holding an index card over their head.

But ultimately, I'm not even that mad at the gym. No, who I am mad at is the willfully unvaccinated, people who, out of irrationality and often raw Republican tribalism, got us into this mess in the first place. I am incandescent with rage that millions of Americans are putting it on the rest of us to protect them from COVID-19, just so they can avoid a simple, free shot that is available at every pharmacy.

Republicans, always ready to destroy lives for some perceived political gain, aren't even hiding anymore that they think being pro-COVID is good politics. As CNN reports, there's "a GOP-wide effort to use the fears and frustrations of Americans worried about another round of school closures and lockdowns as cudgels against their Democratic opponents."

But, of course, the return of restrictions is the direct result of Republican efforts to dissuade Americans from getting vaccinated and keep those COVID-19 case rates high. It's important to remember that this is still a pandemic of the unvaccinated. Case rates are rising rapidly among the unvaccinated, who tend to reject other prevention measures along with vaccines. There are also breakthrough infections, though they affect fewer than one-third of 1% of the vaccinated.

One of the primary arguments being rolled out by conservative media is that refusing vaccination is about "freedom" and "personal choice." But that is a lie. We know it's a lie because Republicans are generally fine with all other vaccine mandates. But most importantly, by refusing to do the right thing, the unvaccinated are stripping freedom and choice from every other American who got vaccinated. We stand by helplessly watching restrictions pile back on and our freedoms dissipate, all to protect those who won't protect themselves. Polling shows that most Americans support vaccine requirements and no wonder — we want our freedom back.

In some corners of social media, it continues to be popular to scoff at those who want their freedoms back, snarling "it won't kill you to wear a mask in the store." But the freedoms the vaccinated are sacrificing so that others can selfishly refuse the shot are far greater than that. It's not just my loss of a beloved gym class. The stories of people's losses are stacking up: A musician who was eager to get back to work is now watching his concert dates get canceled. Folks missing weddings of friends and family because the couple wasn't brave enough to disinvite the unvaccinated. And, perhaps worst of all, the people who are giving up their basic right to be healthy, to free up medical resources for people who turned their nose up at basic preventative care.

In Texas, Republican leadership and right-wing ideology has led to low vaccination rates and subsequently to hospitals overflowing with COVID-19 patients. Gov. Greg Abbott, being a Republican, refuses to do anything to mitigate the spread of the disease. So instead, he's leaning on hospitals to deprive other people of necessary medical care, such as delaying surgeries, to keep hospital resources free to tend to the waves of unvaccinated COVID-19 patients. However angry I am at losing my gym class (also important for physical health, I'll point out), it likely pales in comparison to the rage of someone who has to put off surgery to fix a debilitating but not fatal condition, all because some Fox News junkie thought a quick jab in the arm takes away his "freedom". Not being able to walk because your knee surgery keeps getting delayed is the far greater loss of freedom.

Increasingly, people who are being denied necessary medical care to free up resources for unvaccinated COVID-19 patients are venting on social media:

The situation gets even direr when considering the threats to children, who can't get the shot until they turn 12. Most children who get COVID-19 have a mild case of it, but because of the current surge of cases, the number of marginal cases where kids get really sick is rising. Children's hospitals are being swamped, creating the same resource allocation problem that is making it harder for kids with other health care issues to get the quality of care they need. And yes, it is the unvaccinated who are creating the problem, both by driving up numbers generally and by infecting children they have close contact with.

But even kids who remain healthy are watching their childhoods slip away because of this unnecessarily prolonged pandemic. There's an ongoing political fight between people who want masks in schools to protect kids and Republicans who, in a true fit of irrationality, think it's somehow "freedom" to let COVID-19 run rampant is schools. Kids are the victims of this ugly debate. Rather than just be free to enjoy their childhoods, they are being used as political pawns by right-wingers and facing real threats of losing classroom time and extracurricular activities because Republicans would rather have a virus roam free than let children have their childhoods.

It is true that not all of the unvaccinated are right-wing ideologues. Many heard some conspiracy theories about the vaccines and it's making them reluctant. (That said, since the right is pumping out those conspiracy theories, they still can be blamed ultimately for this.) Others are people who are busy and haven't made the time to get the shot. Of course, there should be every effort to educate people and make the shot easier to get for them.

But such measures must be coupled with mandates.

Mandates may feel unpleasant, but they help people reorganize their priorities so that they put getting necessary medical care over conspiracy theories and busy schedules. Sometimes education alone isn't enough to get people over the hump. That's why we have seatbelt laws and indoor smoking bans. The people who stand to benefit from mandates are often the ones who are most resistant. They are, after all, exponentially more likely to die than those who voluntarily got the shot. And even if one believes they have a "right" to take that risk for themselves, they certainly have no right to keep exposing others, especially children.

Vaccine mandates are coming. New York City and Los Angeles are embracing vaccine mandates to enter some public places, and the Biden administration is mandating vaccinations for military and federal employees. But watching the case rate go up — and freedoms for the already-vaccinated continue to disappear — it's clear that the mandates aren't coming fast and hard enough.

President Joe Biden must immediately mandate vaccinations for anyone getting on an airplane or a train. And while Republican leaders will resist, Democrats who control state and local governments must follow in the footsteps of New York City and make vaccine requirements for public places widespread. Businesses and schools should immediately require vaccines for employees and students over the age of 12. Ordinary people can draw the line with friends and family, rejecting them from all social occasions until they get the jab.

Yes, anti-vaxxers will whine and complain about "freedom." But freedom is what vaccine mandates are about. Vaccine mandates can return freedom to those of us who are sick of canceling plans, sick of losing work, and sick of having to wear masks everywhere we go, even though we're vaccinated.

It's conservatives who are always rolling out that treacly slogan that "freedom isn't free." Well, time to prove that adage. We need our freedom back. Luckily, the cost this time is low: a small prick in the arm that will save a life, probably your own. Not exactly storming the beaches at Normandy, sacrifice-wise. It's time to stop giving up our freedom to coddle people who don't even know what that word really means and start mandating the shots in every way we can.