The Republican strategy to sabotage Biden's vaccine rollout is backfiring 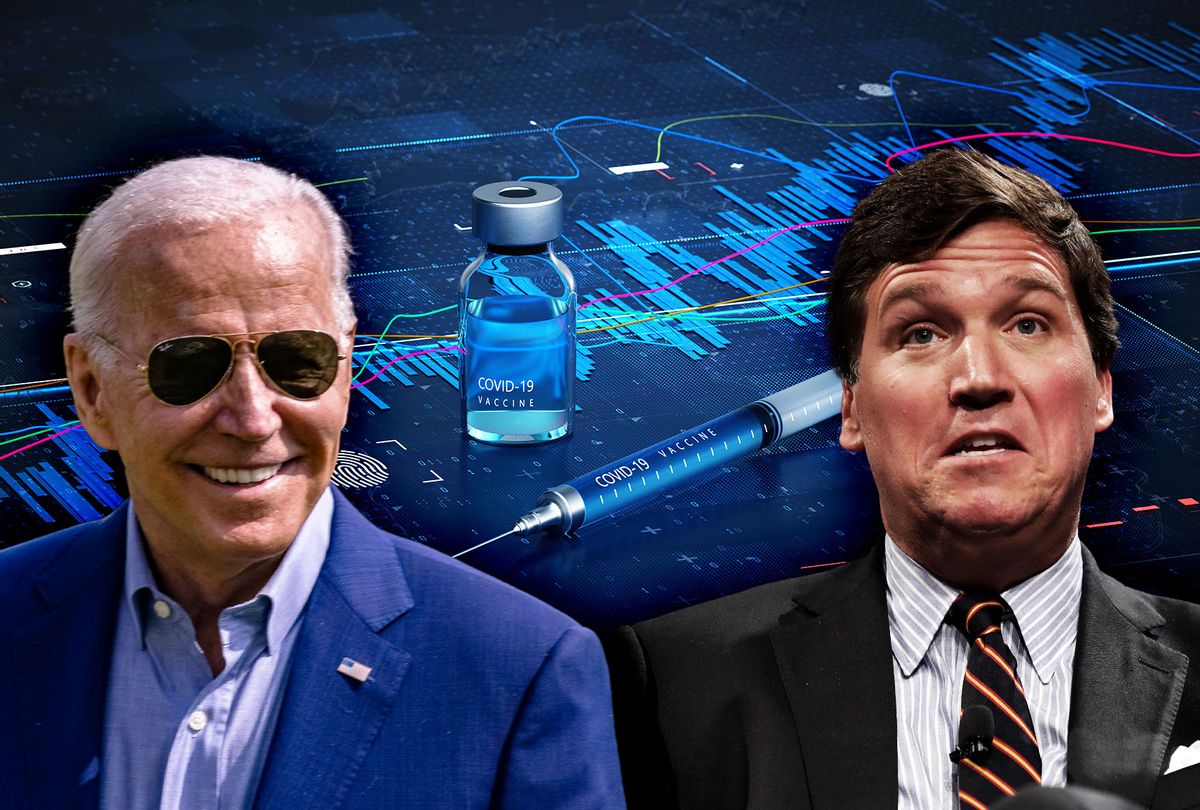 The right's strategy on COVID-19 vaccines, as planned and executed by the Republican Party and Fox News, was a simple as it was sinister: sabotage President Joe Biden's rollout by sacrificing the bodies of their own supporters. If they could convince enough of their people to avoid the vaccine, they could keep COVID-19 transmission rates high and garner headlines from easily duped mainstream outlets declaring things like "Biden falls short" or "Biden fails to contain the virus." For a brief moment in early July, it seemed the plan was working, with a series of headlines that seemingly blamed Biden, flatly ignoring the growing partisan divide on vaccine uptake.

Then the delta variant, an extremely contagious and virulent strain of the virus, started tearing through red-state America, creating hot spot maps that neatly correlated to political maps showing rates of support for Donald Trump. There was no longer any denying that a Republican identity is the best predictor of anti-vaccine sentiment. Mainstream media started to pay attention to how much anti-vaccine sentiment was pouring out of Fox News and how popular Republican politicians like Rep. Marjorie Taylor Greene of Georgia or Sen. Rand Paul of Kentucky were discouraging vaccination. There was no more ignoring the link between Florida's Republican Gov. Ron DeSantis selling gear mocking Biden health advisor Dr. Anthony Fauci and the soaring rates of COVID-19 in his state. The plan to sabotage the pandemic response and blame Biden was backfiring.

That was when Republicans and their propagandists at Fox News decided to strategically put out some mealy-mouthed pro-vaccine sentiments. A clip from Sean Hannity, where the Fox News host offered a superficially pro-vaccine sentiment, went viral, fueled by journalists and liberals who are desperate for any sign that Republicans are giving up on this anti-vaccine thing. What people who championed the clip didn't know, however, was that it came from a larger segment on Hannity's show that was overall negative about vaccination, and was sandwiched by two other popular shows that were also anti-vaccine.

And that's been the pattern: Send out a few strategic statements meant for the mainstream press to make Republicans seem pro-vaccine while the GOP base is still getting a firehose of anti-vaccination propaganda. "Republicans didn't really have a change of heart; this has been mission accomplished for them, minus the part where the public blames Biden for the mess they made," Brian Beutler of Crooked Media wrote in his Big Tent newsletter. Fox News is still pumping out a relentless stream of anti-vaccination propaganda and Republicans are still trying to pin the blame on Biden for the surge of infections and the return of miseries like public masking.

If you're wondering why Fox is so insistent on scaring people away from the vaccine this chyron might be a clue pic.twitter.com/Metv5AVw5a

But is the sabotage-and-frame-Biden strategy on vaccination actually working to bamboozle the public?

New polling data from Axios and Ipsos provides heartening evidence that the well-financed GOP propaganda machine is missing the mark on this one. Americans are not blaming Biden for the delta surge. Instead, they are far likelier to blame unvaccinated people, conservative media, and Trump.

Americans place the most blame for rising COVID-19 cases and the spread of new variants on the unvaccinated, people from other nations traveling to the U.S., and Donald Trump, according to the latest Axios/Ipsos Coronavirus Index. https://t.co/uGT0HLRTKs

About twice as many Americans blame Trump as Biden for the current rise in COVID-19 cases, in fact. But far and away the primary target of blame are the unvaccinated, who 58% of Americans blame for the surge. And it's only that low because of unvaccinated people who are trying to foist the blame on anyone but themselves. When pollsters zeroed in on the vaccinated, they found that nearly 79% of that group blame the unvaccinated. (The rest, presumably, are too busy being sanctimonious on Twitter about how those poor, poor red hats are just economically anxious hapless victims, instead of adults who can be held responsible for their decisions, an opinion much easier to hold if one does not actually spend any time talking to Trumpers.)

Interestingly, way more Americans blame the unvaccinated than blame the conservative media directing people to not vaccinate, suggesting that most Americans are ignoring pleas to see Fox News viewers as hapless victims. And rightly so. The only reason that anti-vaccine propaganda works so well is that everyday Republican voters want to believe the lies. They deliberately tune out good information about vaccine safety and opt-in to listening to the known liars of Fox News. The network's biggest hosts exploit the uglier impulses in its audience — their venality and their tribalist loathing of Democrats — and use that to convince them to eschew vaccination in order to "stick it to the liberals." It's heartening to see that not only do most Americans understand that the unvaccinated are to blame for this surge, but that they likely get the moral complicity of people who would rather get COVID-19 than admit that Biden is right about something.

Well, the people who made that choice certainly are paying the price for it now.

Fox News and the GOP noise machine convinced millions of conservatives that the best way to undermine Biden's presidency was to refuse the COVID-19 jab. And sure enough, they were successful at jacking up COVID-19 rates, filling the hospitals and generating a lot of negative headlines. But the final part of the strategy — where Biden gets blamed for the results of GOP sabotage — is falling apart.

Turns out the public isn't so easily fooled, especially when it comes to situations where the problem is other people acting like anti-social jackasses. And all those people who did as they were asked by Fox News, refused to get the shot, and got sick — in some cases, died — of COVID-19? Their sacrifice was for nothing. They failed, it turns out, to stick it to Biden. Instead, they stuck it to themselves. Too bad people who screwed up this badly tend to double down instead of admitting they were wrong.

It's still not too late, however. The hesitant could still be brought around with some well-placed vaccine requirements, and the sooner that happens, the sooner we can put this pandemic in the rearview mirror.