No doubt delta is more contagious, but the main problem is still right-wingers who refuse to pull their weight 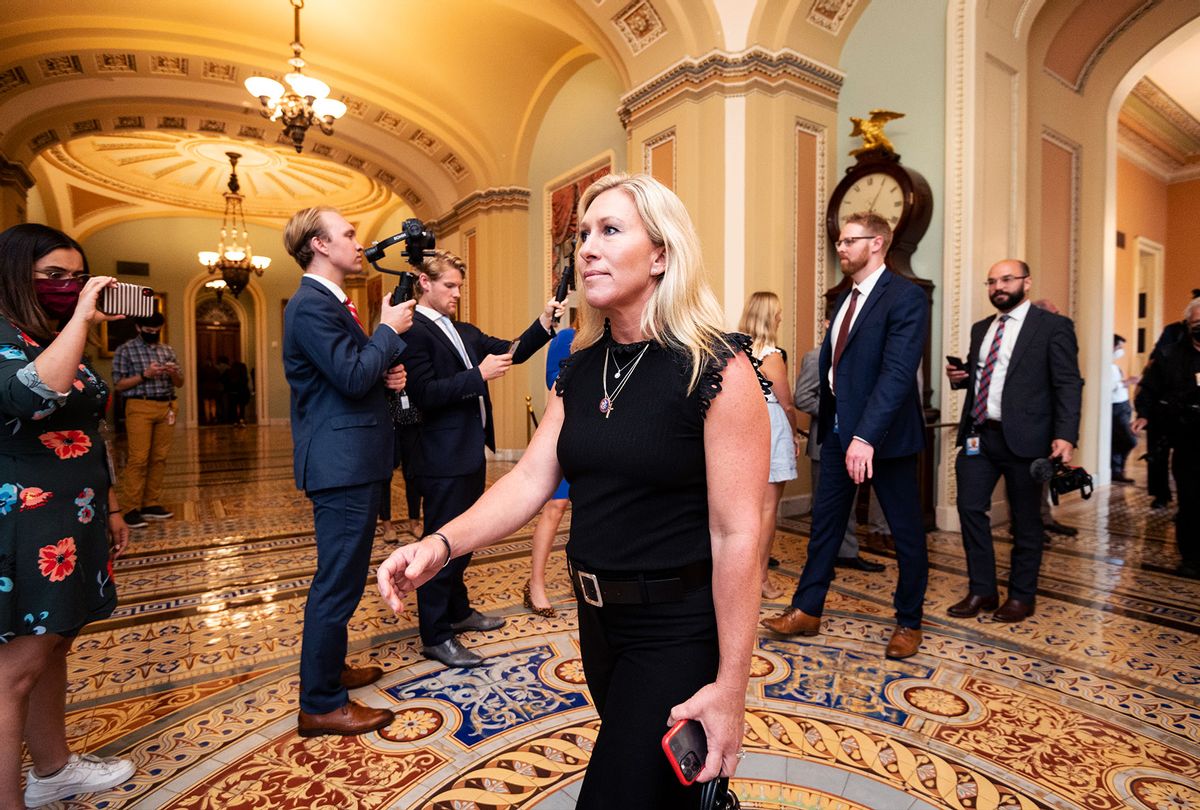 Rep. Marjorie Taylor Greene, R-Ga., walks through the Ohio Clock Corridor to the Senate chamber as a group of maskless Republican members of Congress made their way to the Senate in the Capitol on Thursday, July 29, 2021. The members were drawing attention to different mask rules on the House and Senate sides of the Capitol. (Bill Clark/CQ-Roll Call, Inc via Getty Images)
--

Late Thursday night, the Washington Post published leaked documents from the Centers for Disease Control (CDC) which showed the data used to draft the new federal recommendations that vaccinated people in COVID-19 hot spots wear masks in indoor public spaces. The scientific information is sobering, to say the least, showing that the "delta variant of the coronavirus appears to cause more severe illness than earlier variants and spreads as easily as chickenpox" and "vaccinated individuals infected with delta may be able to transmit the virus as easily as those who are unvaccinated."

To be clear, the vaccines are still highly effective and breakthrough infections are relatively rare, so this is not, as some of the more hysterical or anti-vaccination voices on social media are suggesting, evidence that the vaccines don't work. Moreover, even if a vaccinated person does get a breakthrough infection, it is likely to be relatively mild. The new masking recommendations from the CDC are not so much to protect the vaccinated, as they are to protect the unvaccinated. As one federal health official explained to the Washington Post, "Although it's rare, we believe that at an individual level, vaccinated people may spread the virus, which is why we updated our recommendation."

As President Joe Biden explained in a press conference Thursday, "the existing vaccines work to prevent death, serious illness, and hospitalization," and if "every American is vaccinated, in fact, we would be out of the woods."

While some Americans — kids under 12 and a few people with medical conditions — cannot get vaccinated right now, the real problem is perfectly eligible adults who simply refuse to get the shot. If those folks all got the shot, the pandemic would likely be winding down. These biological details about the delta variant are alarming, but the fundamental reality has not shifted: In this era of effective vaccinations, the continuing pandemic is more a social phenomenon than a biological one.

The delta variant is just a mindless virus. The real problem is our fellow human beings who, as political science professor Scott Lemieux wrote recently, confuse "free riding with freedom — letting people do what they want with no consequences even when the consequences are borne by other people as well." The problem, as I've written about more times than I care to think about, is political. Put bluntly, a huge percentage of Donald Trump's America is refusing to get inoculated, to stick it to the liberals and undermine Biden's presidency.

As far as trolling goes, this is a particularly risky way to go about it. While rates of hospitalizations and death remain lower than they were over the winter, there are still over 300 people dying a day of COVID-19 — and nearly all are unvaccinated. But, as a recent Politico article made clear, that just shows how much right-wing America is running on spite these days, with half of them choosing to roll the dice with COVID-19 rather than admit that Biden and the Democrats are right about anything, even something as scientifically inarguable as "vaccines keep you safe."

No doubt, the resurgence of mask recommendations and even mandates is minor compared to the severe social distancing requirements — which left many people adrift and lonely — needed to control the virus pre-vaccine. But what makes the current situation so frustrating is how unfair and unnecessary it is. This isn't about people pulling together to fight back against a natural threat to humanity. This is about people being asked to make more sacrifices so that a third of Americans — mostly Trump-voting Americans — can keep refusing to do anything at all.

To make it even more maddening, the people being the biggest crybabies about the new restrictions are the very same people who are the cause of the new restrictions. This was amply demonstrated on Thursday when Republican members of the House of Representatives threw a tantrum (which they called a "protest") over new mask requirements. Requirements, mind you, that they caused with their own unbelievably childish levels of irresponsibility.

House Republicans are protesting the mask mandate by walking to the Senate, where masks are not mandated by Capitol physician pic.twitter.com/sFD6AVnbr3

As David Kurtz at Talking Points Memo pointed out, "The Senate is almost universally vaccinated," but the "House remains a COVID cesspool," because so many Republicans in that body refuse to get vaccinated. They are protesting a problem they continue to cause with their own recklessness. There was a similar situation in Missouri this week, when, as Salon's Jon Skolnik reports, the "acting director of the St. Louis County Department of Public Health alleged that he was verbally and physically assaulted at a Tuesday City Council meeting after encouraging the council's members to enact a mask mandate." The thing is, he wouldn't feel the need to recommend a mask mandate if people would just act like adults and get their shots.

The GOP is supposedly the party of "personal responsibility," but it's quite clear that it's a party of whiny brats who expect everyone else to do everything for them so that they never have to do even the bare minimum. Now they are freaking out about facing the consequences of their own actions. Unfortunately, everyone else is also paying the price for their irresponsibility.

The solution, as it usually is with free riders, is to stop asking nicely and start forcing. We don't ask people not to speed and drive drunk. We punish them with fines and jail time. Taxes are not a suggestion. And so it should be with vaccines. Anyone who wants to live in society and benefit from it should do their part. If you don't like mask mandates, it's time to get the shot, so we can be rid of the masks already.

Biden is getting bolder on this front, instituting a new vaccine-or-regular-testing mandate for federal employees. The military is moving "quickly" in the same direction, according to Deputy Pentagon press secretary Jamal Brown. These are good moves. Still, things are moving far too slowly. Banning people who haven't been vaccinated from flying, for instance, would move things along much faster.

Mask mandates would go down a lot more smoothly for vaccinated America if there was some assurance both that it was a temporary set of affairs and that the real cause of the problem, which is vaccine refusal, was being taken care of. Mask mandates without vaccine mandates simply are unfair and ineffective. The delta variant is alarming, but our biggest problem — bratty Trumpers — hasn't changed. We can't make them be better people. But local, state and federal government entities can work together to keep them from continuing on as dangerous free riders. That needs to happen sooner rather than later for all of our sake.