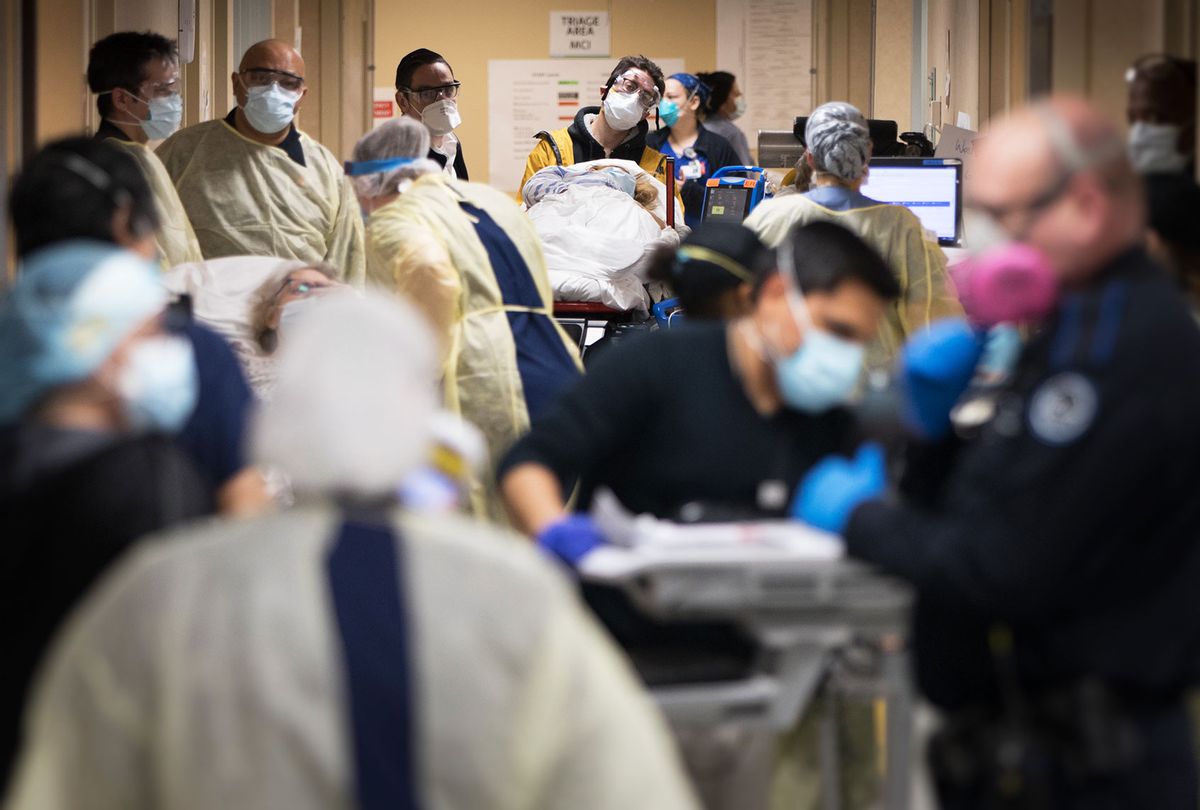 In July, Nashville, Tennessee-based shock jock Phil Valentine produced a song called "Vaxman" – a parody of The Beatles' "Taxman" – that mocked COVID-19 vaccinations. Briefly after he posted the song, Valentine said he had been diagnosed with the virus, but he was taking vitamins and ivermectin and expected to be fine.

Valentine, 61, died on August 21 after being on a respirator and then intubated. His family said he regretted not getting vaccinated and urged others to get the shots.

When the news broke, some social media followers offered condolences. Others, however, asked why someone who could have gotten a safe free, vaccine, was taking up needed critical care medical resources, like an ICU bed and respirator, when COVID-19 cases were surging.

Worse, some noted, Valentine used his locally popular radio show to persuade others not to get vaccinated thus, arguably, making the pandemic worse.

Since Valentine's death, several more outspoken opponents of vaccinations have died from complications due to COVID-19, including Florida talk show host Marc Bernier, 65, who went so far as to liken the government's endorsement of vaccines to "acting like Nazis."

Valentine's plight, and the reaction to it, highlights an ongoing medical ethics question that has forced the medical industry and the public to focus on a horrific question: when hospitals are overwhelmed with unvaccinated adult COVID-19 patients, limiting their ability to provide medical care for some, how might hospitals ration care?

The debate emerges at a political moment during which, among much of the vaccinated public, ire towards the unvaccinated has already reached a fever pitch. "I am mad at [t]he willfully unvaccinated, people who, out of irrationality and often raw Republican tribalism, got us into this mess in the first place," Salon contributor Amanda Marcotte wrote. "I am incandescent with rage that millions of Americans are putting it on the rest of us to protect them from COVID-19, just so they can avoid a simple, free shot that is available at every pharmacy."

Thus, the question of care rationing towards a population that — some might argue — is willfully putting their lives and others' lives at risk, is not merely a fair topic of conversation, but necessary given the dire condition in many American hospitals. And though it is spoken of in hushed tones among some healthcare providers, who say they have faced "retribution" for merely discussing care rationing, such moral calculus is not a luxury in the face of resource limitations. Indeed, the debate over care rationing has grown more urgent as COVID-19 hospitalizations and deaths continue to rise, especially in those regions of the U.S. with lower levels of vaccination.

Those who need ICUs and respirators aren't just people showing up at ERs with COVID-19. They include a retired physician, the father of Khary Payton – best known for playing King Ezekiel on "The Walking Dead."  Payton tweeted on August 30 that his father couldn't get treatment for a rare form of leukemia because transplant wards were being used for COVID-19 ICU overflow.

"A lot of people who don't trust doctors like my dad … didn't get vaccinated and wouldn't wear a mask but they went ahead and took my dad's bed when they got so sick they could barely breathe," Payton said on Twitter. "Now my pop's life is in the balance."

So the availability of a free, safe vaccine – and the existence of a large populace that refuses to be vaccinated and urging others to refuse – in some people's minds changes the debate. Not only among laypeople and the commentariat, but among healthcare professionals.

"I can't tell you how many emails I've had in the last 48 hours talking about this; those of us working with the National Academies right now are going around and around on this issue," Dr. Eric Toner, a senior scholar at the Johns Hopkins Center for Health Security, said in a Zoom interview.

"Some believe you can make an ethical case for including vaccination status in a ventilation or other critical care algorithm," Toner said, adding that he, personally, wasn't convinced that would be an acceptable criterion.

Toner was part of a Maryland task force that developed one of the existing large-scale plans for medical triage – also known as crisis standards of care – during a catastrophic public health emergency. The impetus for that plan, finalized in 2017, were emerging public health threats like the 2009 H1N1 influenza virus and Ebola.

The Maryland plan presciently noted "modeling studies suggest that an influenza pandemic similar to that of 1918 would require intensive care unit (ICU) and mechanical ventilation capacity that is many orders of magnitude greater than what is available."

A year-and-a-half into the pandemic, that time has arrived, at least in some areas of the country. Idaho Governor Brad Little, a Republican, described a "heartbreaking" tour of a Boise, Idaho ICU in an August 31 video, saying all the COVID-19 patients in that wing were unvaccinated.

"On a daily call with hospitals this morning, we heard there are only four adult ICU beds available in the entire state out of close to 400," he said.

If that situation continued, Little said, "in essence, someone would have to decide who could be treated, and who could not."

Idaho, historically a politically conservative state, has one of the lowest vaccination rates in the country, with only 39.5% of its population fully vaccinated as of September 6, according to the Mayo Clinic based on data from the Centers for Disease Control.

On September 7, Little's warning became reality in northern Idaho when the Idaho Department of Health and Welfare activated its crisis standards of care for that part of the state.

Even a state that has a higher vaccination rate, like Florida, with 53.8% fully vaccinated, is experiencing a surge of cases and mortality – reaching a 7-day average of 335 deaths – the most ever by September 3, according to data compiled by the New York Times. Republican Governor Ron DeSantis has variously been opposed to public health initiatives, including instituting a policy that schools couldn't mandate mask wearing.

But the degree to which hospitals are overwhelmed, and the notion that care rationing may be a necessity soon for many hospitals, is not widely known among members of the public.

John Moskop, a professor of bioethics at Wake Forest University School of Medicine in Winston-Salem, North Carolina, speaking on an April virtual panel discussing allocation of critical care resources, said that though a state plan had been formulated, to his knowledge there was no public education effort about it.

"I think our state officials thought if we formally educate it will cause lots of pushback, concern, we don't want to necessarily have to deal with that," he said.

The only thing that seems to change people's behavior is personal knowledge of someone being hospitalized with COVID-19, said Dr. Greg Martin, professor at Emory University in Atlanta, Georgia and the president of the Society of Critical Care Medicine.

"It might make people more proactive and protective of themselves and others," he said, adding, "but that message has been out there for months."

Care rationing isn't merely about the number of hospital beds in the ICU, or the number of respirators available for patients who can't breathe on their own. Care is also limited by the number of skilled staff needed to run the highly specialized equipment that makes previously terminal conditions potentially survivable.

Besides crowded ICUs and more hours, the very act of deciding which patients get lifesaving resources – and which don't – is a huge source of stress, Toner said in an email.

Healthcare workers "are experiencing  real moral injury and extreme stress and this is an additional driver of the critical staffing shortage that now exists and leads to more crisis standards of care conditions," he said.

In a recent National Academy of Medicine paper asking what was learned about crisis standards of care during the pandemic, the authors, including Toner, thanked healthcare providers for talking to them openly about their experiences.

However, they added a chilling note: "the authors are not able to share the specific details, as some of these colleagues have suffered professional retribution for raising these issues or being willing to have open and honest discussion of the tactics that were implemented."