Why is everyone arguing over horse paste? To avoid discussion about the dangers of vaccine refusal 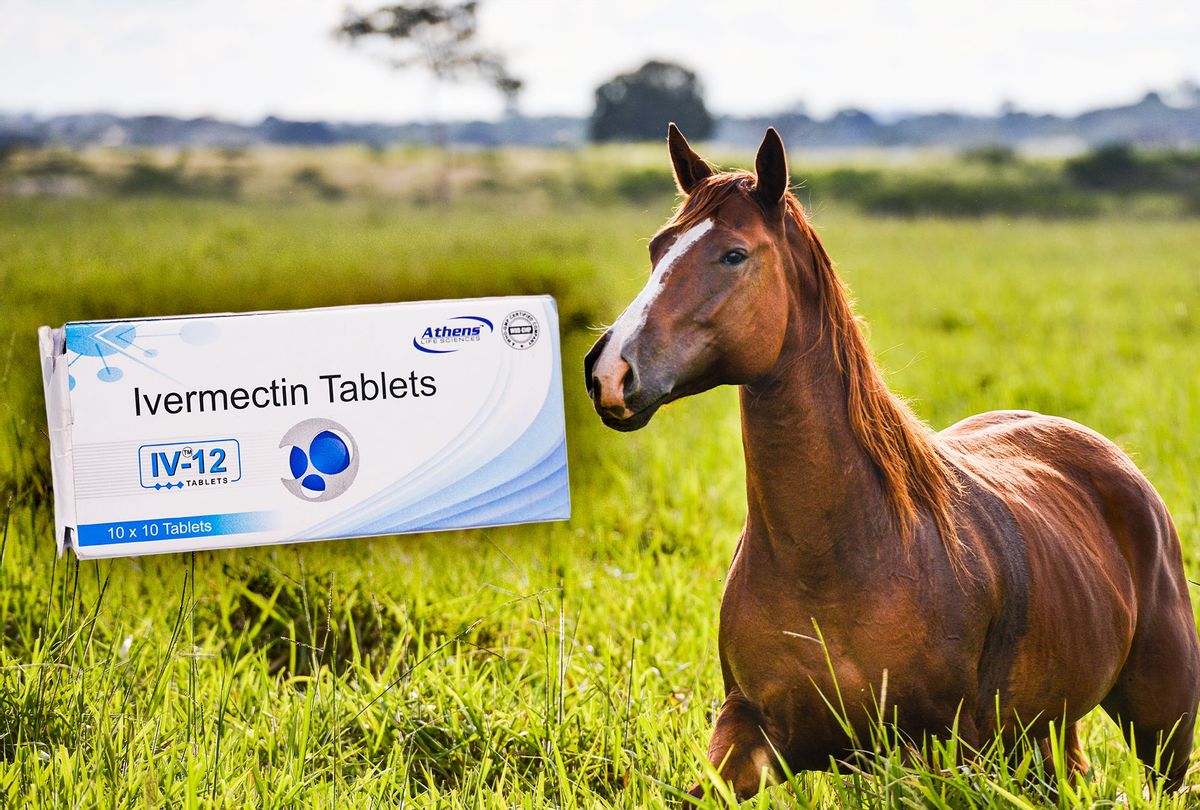 A Horse and Ivermectin Tablets (Photo illustration by Salon/Getty Images)
--

Perhaps we are bored of sharing stories of unvaccinated COVID-19 patients pleading from their deathbeds for others to learn from their mistakes. (I'm not!) But the hot new trend in liberal-and-vaxxed social media is sharing scare stories about ivermectin — an anti-parasitical drug commonly used in farm animals in the U.S. — that conservatives have convinced themselves is a robust alternative to getting the COVID-19 vaccine. (It most definitely is not.) But unlike the seemingly endless stream of stories about dying people realizing, far too late, that they should have just gotten the shot instead of playing Own-the-Libs Roulette with a deadly virus, scare stories about ivermectin have an undermining tendency of turning out not to be true.

The problem was that the story simply wasn't true.

As Daniel Dale of CNN explains, it seems the source of the story was a bungled mess of "Telephone" that starts with out-of-context quotes from one doctor. To be certain, Oklahoma hospitals are dealing with overcrowding, but the cause isn't ivermectin overdoses. The actual cause is people refusing the COVID-19 vaccine, then getting COVID-19, and in turn clogging up hospitals because they thought it was more important to thumb their noses as the "liberal establishment" than avoid an extremely dangerous respiratory illness.

Conservatives were ecstatic about the Rolling Stone retraction, treating this minor mistake as irrefutable evidence that everything that the mainstream media says about anything is B.S. Breitbart declared the story a "hoax," even though it was most likely just a mistake by overly eager traffic-chasers. Kevin Williamson of the National Review used the story as an anchor for an extremely creepy rant about the largely imaginary problem of the media fabricating the rape crisis. (A few bogus stories don't change the fact that the vast majority of accusations are true, Kev.)

Tellingly, both Breitbart's and National Review's coverage ignored the real story, which is that risking a severe case of COVID-19 instead of getting vaccinated is a poor lifestyle choice. The word "covid" only shows up in the blockquote from the Rolling Stone correction in the Breitbart story. Williamson uses the word "rape" 13 times in his piece, but he never actually typed the word "covid," which only shows up, again, in the blockquote from the retraction. Instead, he writes, "The most important word in this story is not 'ivermectin' — it is 'Oklahoma.'" In truth, however, the most important word is "COVID-19."

While there have been some ivermectin overdoses, the real issue here is not the horse paste or the useless consumption of it by Fox News addicts. The issue is what they're not doing: getting vaccinated. That is what is causing hospitalizations to spike and over 1,500 people — the vast majority unvaccinated — to die every day. Conservatives want to debate the safety of ivermectin because it's a way to avoid talking about the real issue, which is COVID-19 — and how refusing vaccination is both idiotic and unethical.

Conservatives know a debate about horse paste safety is a debate they can probably win. While self-administering a drug that's packaged in horse-sized quantities has some dangers, the truth of the matter is ivermectin is generally considered a safe drug and it's used around the world effectively to treat serious diseases in humans, especially river blindness. Making the debate about the ivermectin itself also allows conservatives to pretend that this is a matter of liberal elites mocking the folkways of the common man of middle America — as if consuming horse paste is a noble rural tradition instead of something invented a few months ago as a response to President Joe Biden's well-publicized vaccine rollout.

If the debate is on the more substantive grounds of vaccine refusal, then conservatives lose handily because refusing vaccines is both stupidly risky and, crucially, deeply immoral. Republicans and the apologists know this, which is why they'd rather just talk about how the horse paste is safe. They want to ignore the more embarrassing story of how red-state hospitals are filling up with COVID-19 patients because conservatives think they're too good for a "liberal" shot.

Ivermectin defenders didn't invent this strategy, to be clear. This is a common shell game with "alternative medicine" pushers, who like to talk about how "safe" and "natural" their methods are while avoiding the real issue of how useless they are. "What's the harm?" is a common gambit of alt medicine peddlers. As long as the focus is on the side effects of the fake treatments themselves, they tend to get away with it. But the harm is that people are eschewing treatments that actually work in favor of these fake "alt" treatments, as we've seen in high profile cases like the death of Steve Jobs, who delayed cancer treatments in favor of juices and acupuncture. Not, mind you, because drinking juice is dangerous. No, it was the cancer that got him.

Unfortunately, liberals play into this strategy by hyping the dangers of ivermectin, instead of dragging the conversation back to the dangers of being unvaccinated. And I get it! I too have succumbed to the urge to share stories about the risks of the horse paste. The problem is, in the process, far too many liberals are spreading misinformation. The latest scare story claims that ivermectin causes "sterility," which is spreading like wildfire in left-leaning social media, even though it's been thoroughly and easily debunked.  And as much fun as it may be to imagine Joe Rogan inadvertently sterilizing himself, it's way too easy for conservatives to exploit these fake stories as "proof" that they are being victimized for their quaint horse paste-eating ways.

Far too many liberals are taking the right-wing bait and imagining that this is a debate about the safety of horse paste vs. vaccines. But the real debate, the one conservatives are skillfully avoiding, is over whether it's safer to be vaccinated or unvaccinated. On that front, the evidence is clear and irrefutable: Being unvaccinated is exponentially more dangerous, as a quick glance of the COVID-19 hot spot map shows.

This is a classic opportunity cost problem. Time spent arguing about the safety of horse paste is time that could be better used talking about the risks of getting COVID-19 by refusing vaccination. Plus, who knows what the next "miracle cure" the right comes up with as an excuse to avoid taking a safe, effective vaccine? For all we know, it could be meditation and kale juice, long walks in the woods, or just standing on your head for a few minutes a day. The issue isn't that the "alternatives" to vaccination are dangerous. It's that not being vaccinated is dangerous. And liberals should resist any and all efforts by conservatives to muddy the waters with distractions like the fake debate over the safety of horse paste.