Democrats hit the panic button. Is it too little too late for Joe Biden?

Democratic voters are demoralized — can congressional leaders and Biden turn the ship around? 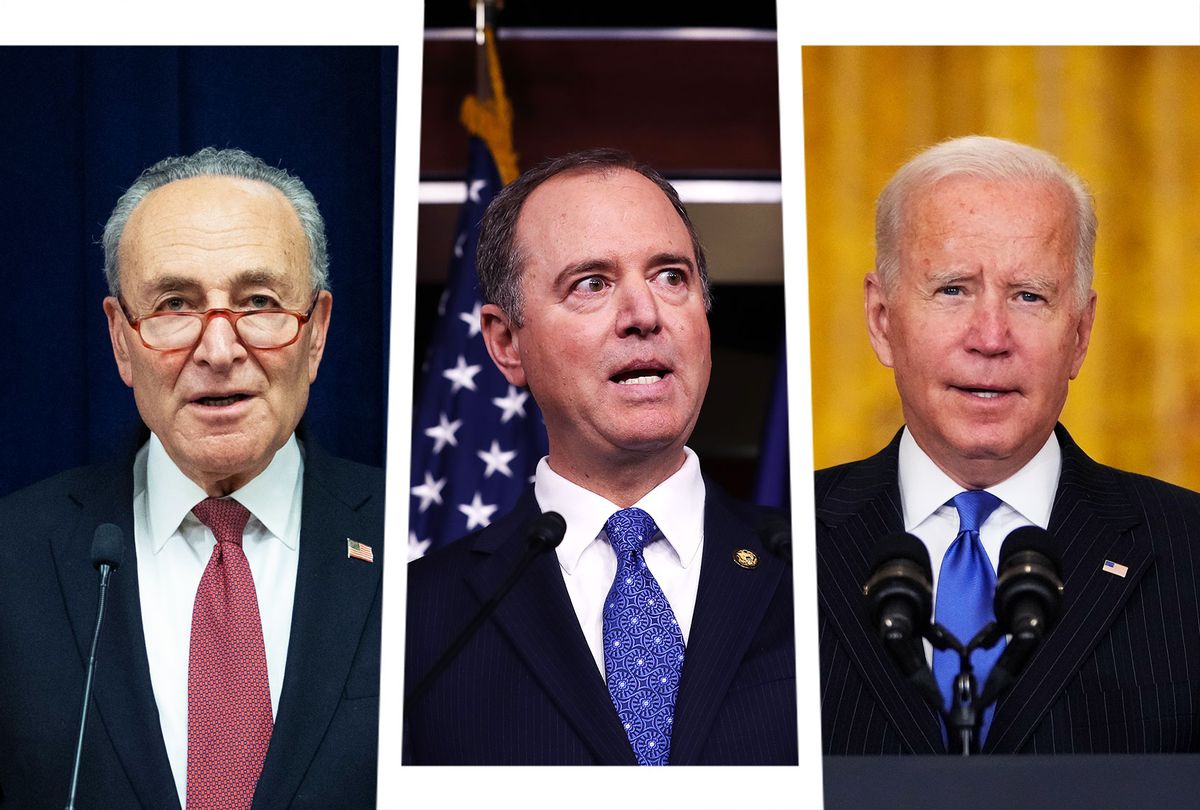 Democratic voters are depressed, demoralized, and tuning out — and there's no use in denying it.

President Joe Biden's economic agenda is stuck in the mud, supported by 96% of Democrats in the Senate yet blocked by two senators whose massive egos and lobbyist addictions are causing them to turn against the party. Biden failed to enact vaccine mandates early enough or broadly enough so now millions of Fox News-addled Americans still are resisting vaccines, prolonging the pandemic and contributing to the national sense of despair. On top of that, Donald Trump has faced no real consequences for his attempted coup while the various criminal apparatchiks he surrounds himself with are also walking around happy and free. So efforts to stop the next coup are moribund, hitting the wall of Sens. Joe Manchin of West Virginia and Kyrsten Sinema of Arizona, who love that lobbyist-pleasing filibuster more than they love democracy.

Biden and Democrats were able to pass the American Rescue Plan early in his administration, and that staved off a worse situation. But "well, it could be worse" is an unsatisfying message, especially when the country is in dire straits and the threats against democracy are only escalating. The sense that this country is in a nosedive hasn't changed, even if the rate of descent has been temporarily slowed down.

Unsurprisingly, then, Democratic voters are increasingly giving up hope.

Biden's approval ratings are down and he's taking a hard hit among the very voters Democrats need to win in 2022 and 2024. As NBC News reported this week, "A Pew Research Center poll found that from July to September, Biden's approval rating fell by 18 points among Black voters, 16 points among Hispanics and 12 points among women." His approval is down 13 points among Democratic voters. As Cleve Wootsen writes in the Washington Post, the "Black and other minority voters who helped fuel Biden's victory" have started to "see what they consider unfulfilled promises and dwindling hope for meaningful change."

Karen Tumulty of the Washington Post details a similar phenomenon in which "female voters, whose engagement and activism fueled the gains that Democrats made during Donald Trump's presidency, are increasingly tuning out politics." Pollsters report that women in focus groups register a "sense of growing political ennui." One pollster noted that Black women especially are saying, "It doesn't matter who we elect, it's all the same."

This is really bad, especially as Republican voters are fired up by their bottomless sense of aggrieved entitlement and ready to turn out in 2022. Add to that voter suppression and gerrymandering, and it's looking like a bloodbath for Democrats in the midterms if they can't turn this ship around.

To be entirely fair to Democratic leadership, they seem well aware that they have a serious problem on their hands, and they are trying to do something to change the growing sense that Democrats are a do-nothing party.

The first big test of whether or not Democrats can show even a modicum of initiative and spine is in the handling of Trump crony Steve Bannon, who could soon be held in contempt of Congress for his refusal to answer a subpoena pertaining to Trump's coup and the January 6 insurrection. In theory, this is a jailable offense and Bannon should be in danger of a dramatic perp walk. Bannon clearly believes Democrats don't have the guts to do it. Democrats, however, are insisting otherwise.

"He will be prosecuted, that's our expectation," Rep. Adam Schiff of California told MSNBC. "He apparently feels he's above the law. But he's about to find out otherwise."

Big talk, but can they make good on it?

The process of actually doing so — described by CNN as "a series of steps needed to move forward," including holding meetings, writing a report, and referring it to the House for a vote, then referring it to the Justice Department — doesn't inspire confidence. Every step allows the notorious cowards in the party to get cold feet and telling themselves an idiotic story about how inaction somehow plays better with the voters than action. No wonder Bannon is so sure he'll get away with this.

Looking to the legislative agenda, there's a similar question about whether or not Democratic leaders, who clearly understand that their future success depends on current accomplishment, can get anything past the do-nothing obstructionists in their own party.

Voters want the entire package Biden promised, $3.5 trillion price tag and all, but Manchin (sigh!) is demanding they shrink the size of it. The good news is it appears most of the Democratic caucus is ready to play ball, understanding that doing something is better than doing nothing. House Democrats are strategizing about how to cut the topline number to placate Manchin, without giving up on must-pass policy items.

The remaining problem appears to be Sinema, who is, if it can be believed, an even worse person than Manchin.

Arizona's senior senator is reportedly still insisting that a smaller infrastructure bill that she helped craft with Republicans be passed before the larger bill. Her motives aren't exactly mysterious — this is a transparent effort to trick the 96% of the party that disagrees with her into giving her what she wants, so she can then renege on the deal and kill the bigger bill. Sinema isn't as clever as she thinks she is, but she is unfortunately powerful. Her combination of ego and idiocy may prove fatal to Biden's agenda.

Finally, there's voting rights and democracy reform, without which, there is probably no stopping Trump's out-in-the-open plans to steal the 2024 election.

Senate Majority Leader Chuck Schumer is still trying to get bills to prevent at least some of the GOP efforts to gut democracy. Next week, he is bringing up for a vote the Freedom to Vote Act, a pared-down version of earlier voting rights legislation that Manchin claims to believe will attract enough Republican votes to overcome the filibuster.

Of course, it will not. The GOP is unified in their opposition to democracy. Even the two anti-insurrectionist House Republicans who are on the January 6 commission reject bills to shore up the right to vote. But Schumer's clear hope is that Manchin will see the entire GOP vote down a bill Manchin put so much hope in, and will change his mind, allowing filibuster reform so that voting rights can be protected.

I'm not holding my breath. Manchin's commitment to the filibuster is likely not as principled as he claims, but rooted more in protecting wealthy interests that constitute his donor base, who feel threatened by the possibility of real progressive change. But as repugnant as Manchin is acting, his behavior is just the symptom of a larger problem, which is the institutional morass making it hard for Democrats to make any of the changes necessary to stave off the looming threat of a total GOP takeover and, eventually, Trump's second term as president.

Still, it is actually quite remarkable how, despite all the roadblocks and institutional failures, a strong majority of Democrats on Capitol Hill do seem to understand both the problems the country faces and what the solutions should be. That wasn't always true, as anyone who has witnessed decades of do-nothing centrist control over the party can attest. In many ways, that makes the 2022 electoral bloodletting that is the likely result if Democrats can't turn the ship around even more tragic. These are mostly folks that are trying, and simply running up against a wall built by generations of their forebears who feared all change.

No wonder voters are so depressed. A party that refuses to listen to voters is frustrating, but so is a party that hears them but still can't do anything about it. Either way, it may not feel to many worth the effort to even vote.