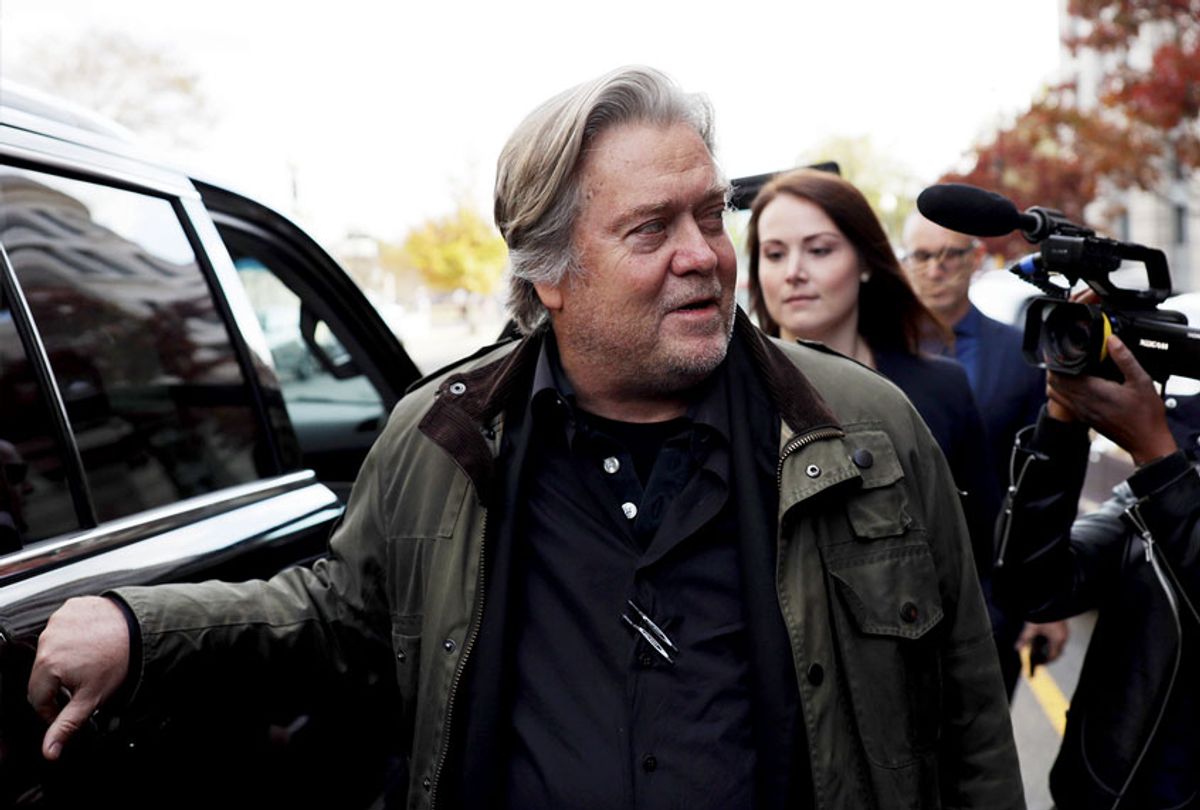 Steve Bannon is one step closer to being held in criminal contempt.

The House committee investigating the Jan. 6 Capitol riot said on Thursday that it plans to vote next week on whether to hold former Trump adviser Steve Bannon in criminal contempt for his refusal to cooperate with the panel's subpoena.

Rep. Bennie Thompson, D-Miss., the committee's chairperson, told CNN a meeting on the matter was scheduled for next Tuesday, per House rules — and that the members were "completely of one mind" that Bannon should be referred for charges.

It's a sharp escalation of the cat-and-mouse game the committee has been playing with the longtime right-wing operative, who said he will refuse to testify in front of the panel until the committee comes to an agreement with the former president on his assertion of executive privilege — or a court rules that Bannon must comply.

Thompson said of the decision, "we reject his position entirely."

"Mr. Bannon has declined to cooperate with the Select Committee and is instead hiding behind the former President's insufficient, blanket, and vague statements regarding privileges he has purported to invoke," he wrote in a statement Thursday. "The Select Committee will not tolerate defiance of our subpoenas, so we must move forward with proceedings to refer Mr. Bannon for criminal contempt."

This isn't the first time Bannon has defied a congressional investigation, either. He similarly stonewalled representatives during the House's investigation into the Trump campaign's Russia ties — seemingly with the knowledge that the Department of Justice at the time would never decide to hold him in contempt for the obstruction.

"He would never be prosecuted by the Trump Justice Department," Rep. Adam Schiff, D-Calif., said of Bannon during an appearance on MSNBC this week. "But those days are over. And I view that not only as essential to our investigation but I also view this, the enforcement of the rule of law, as an early test of whether our democracy is recovering."

Thompson did note in his statement that two other Trump Administration officials, former Chief of Staff Mark Meadows and Kash Patel, a Trump loyalist and ex-chief of staff to then-acting Secretary of Defense Christopher Miller, both "are, so far, engaging" with the committee's investigation. But Patel reportedly ditched a scheduled appearance in front of the panel Thursday.

"He didn't show up. He's continuing to engage," Rep. Adam Kinzinger, R-Ill., told CQ Roll Call after the snub. "We have a limited threshold of patience for that."

Patel continues to bash the Jan. 6 investigation efforts in public statements and is using the subpoena as fodder for a fundraising pitch, calling the committee's efforts "corrupt."

The committee was also having trouble serving former White House deputy chief of staff Dan Scavino his subpoena, according to CNN, which cited anonymous sources familiar with the matter. This may delay his deposition, the network reported.

This flurry of headlines capped off a busy week for the panel, which reportedly heard testimony from former acting attorney general Jeffrey Rosen about his alleged role in fighting off Trump's ultimately failed bid to overturn the 2020 election.