Conservatives conjure up a 21st-century Satanic panic. Will it work?

The Loudoun County case was rape. The anti-trans hysteria unleashed in Virginia, however, is wholly invented 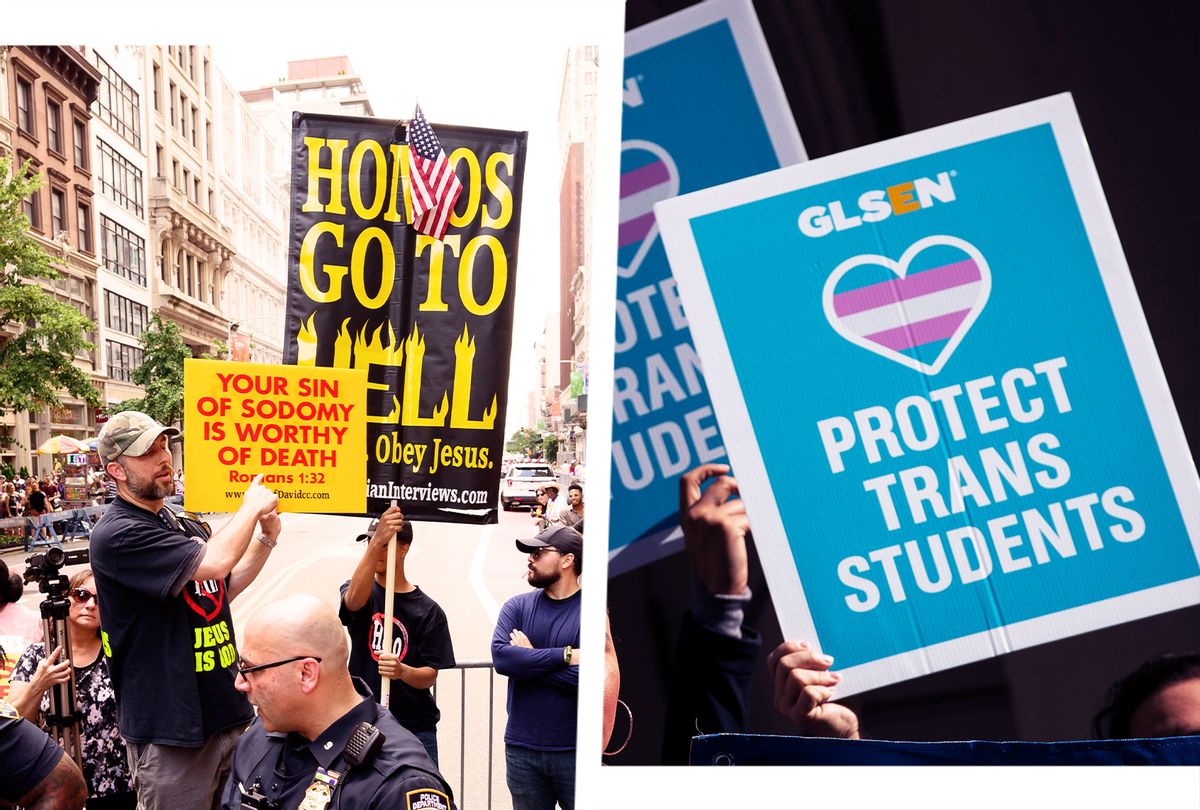 Republicans thought they had a live one in Loudoun County, Virginia. But, as happens with most right-wing panics, things were not as they were made to seem.

Ever since same-sex marriage was legalized, the right has been casting for a new villain in their endless culture wars. They swiftly landed on an even smaller, and therefore less understood, minority than gay people to demonize: Trans people. Their main weapon for driving up fear and hate was a myth that trans women — or cis men pretending to be trans women — lurk in women's restrooms to rape unsuspecting cis women who enter these newly tolerant spaces.

The problem was that it was nonsense.

Research repeatedly shows that trans-inclusive bathroom policies have no link to sexual assault. It's trans people who are at higher risk of being assaulted if denied access to the facilities that match their gender identity. But after two girls in Loudoun County schools — which, in a remarkable coincidence, also happens to be ground zero for other astroturfed right-wing freakouts over "woke" school policies — were sexually assaulted, the right pounced. Rumors spread that this was a real, live example of a man pretending to be a woman in order to rape strangers in the bathroom.

This was also not true.

The sexual assaults absolutely did occur, and the school district appears to have mishandled the situation, but the assaults themselves don't resemble the trans panic urban legend. One assault happened in a classroom. The other did happen in a bathroom, but the school did not have a gender-inclusive policy at the time. Instead, the victim testified that she and the rapist had repeatedly snuck off to meet in the bathroom, as kids often do. Like the majority of rapes, this was a case where the victim knew her attacker, who was identified in court as a boy.

So the story is not, in any way, evidence that gender-inclusive bathrooms are a threat to women and girls. This is the kind of acquaintance rape that the right usually finds themselves minimizing, as happened after accusations against Justice Brett Kavanaugh were made public and the release of a taped sexual assault confession from Donald Trump. Instead, the case is reminiscent of the "Satanic panic" that swept the country in the 80s and 90s, which was driven by similar reactionary fears and wildly misguided ideas about the realities of sexual violence.

Back then, the urban legends accused imaginary Satanists of raping and killing children, which led all too often to actual miscarriages of justice. In some cases, crimes were made up entirely whole cloth, as happened in the infamous McMartin preschool case. In other cases, the crime was real, but the public's understanding of it was completely false. That's what happened in the West Memphis three case, where a very real murder of three young boys was spun as "Satanic ritual," resulting in the conviction of three innocent teenagers and the actual killer walking free.

As Sarah Marshall of the "You're Wrong About" podcast explained to Vox earlier this year, the Satanic panic first arose because "women and mothers were entering the workplace" in record numbers. Stories about daycares being dangerous places where Satanists rape children were a handy weapon to shame women who rejected the housewife role.

Now, it's easy to see the parallels to the panic over trans people in bathrooms. In both cases, the right is wielding lurid but misleading stories of sexual violence to provoke anger and panic over changing gender norms and expanding human rights. And unfortunately, innocent people are getting attacked.

Thankfully, in the Loudoun case, it appears the correct person was convicted of the actual crime. But the situation is still being weaponized against innocent people, specifically trans people whose safety depends on having access to bathrooms that align with their gender identity. And, as happened with the Satanic panic, the titillating but misleading stories completely flip reality on its head. In the real world, patriarchy is the cause of sexual violence. In the world of reactionary fantasies, it's people who reject patriarchal norms — working women, trans people — who are the problem.

In an essay that recently went viral, Marshall's podcast cohost, Michael Hobbes, identified one of the telltale signs that what you're dealing with is a moral panic and not a real problem: Irrelevant examples, which often turn out to be cases where "these anecdotes actually demonstrated the opposite of the panic's core thesis."

The Loudoun case is a crystal clear example of this. The rape definitely occurred, but it had nothing to do with gender-inclusive bathroom policies. On the contrary, it's yet another story in the long litany of #MeToo stories, where sexual violence is downplayed and ignored by sexist institutions. Which is the exact opposite of the pro-patriarchy story that the conservatives stoking trans panic want to tell.

The trans panic resembles the Satanic panic in another way, reigniting the unfortunate tendency of a minority of feminists to play the useful idiots to reactionary forces, giving cover to what is ultimately an anti-feminist movement.

In the 80s, a lot of feminists were understandably glad that the public was finally starting to pay attention to the problem of sex abuse, after decades of feminists raising the alarm. This gratitude, however, all too often manifested as an unwillingness to be skeptical of the wild stories of Satanists and rape being pushed by the reactionary right. To be clear, plenty of feminists pushed back at the time, but a handful of feminists, fearful of returning to a time when victims were routinely disbelieved, were overly credulous to these impossible stories of Satantic ritual abuse.

The same thing goes on today with the trans panic.

The majority of feminists support trans rights, but a small and outspoken minority — the most famous being J.K. Rowling of "Harry Potter" fame — have sided with the reactionary right in seeing trans people as a threat to cis women. The BBC recently ran an article headlined, "We're being pressured into sex by some trans women" that passed talking points from an anti-trans organization off as "research." As happened when feminists gave credence to the Satanic panic in the 80s, these anti-trans feminists give moral cover to reactionaries bashing trans rights.

The moral of the Satanic panic should, after all this time, be clear: Be skeptical of reactionaries masquerading as the "protectors" of women and children. Unfortunately, however, moral panics over gender, sexuality, and young people tend to cloud the judgment of all sorts of people, including some — like feminists — who really should know better. The reality of sexual violence is as it always has been. It's not caused by letting women and sexual minorities have rights. It's caused by eons of patriarchy and the male entitlement that it has engendered. And we should all be very wary of hysterics peddling urban legends who want to distract us from that reality.