Trump may believe otherwise, but he's a huge bore. His followers' unbreakable loyalty is what's so fascinating 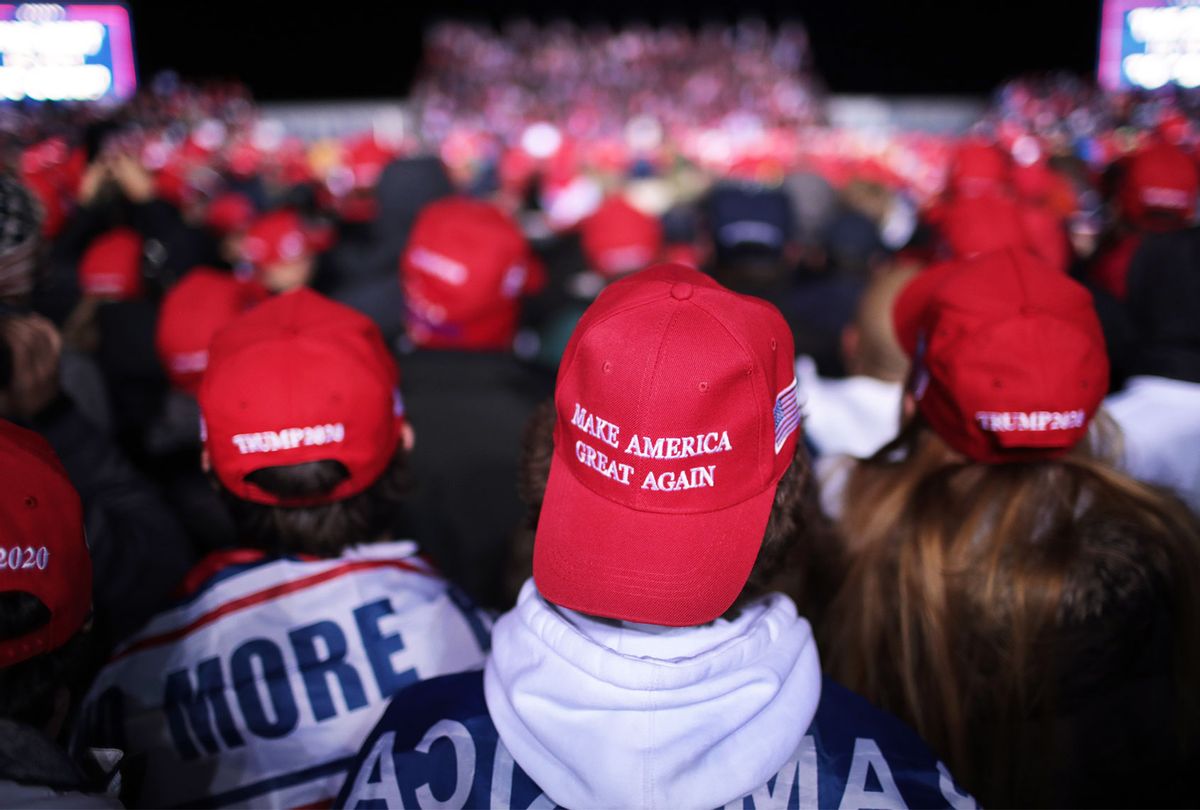 Are we addicted to Donald Trump? It's a question that's haunting journalists and political commentators, most of whom hate Trump but cannot deny that his name drives traffic and ratings. Even though Trump lost the election and Joe Biden will be the next president, Trump continues to be the big attention draw for political websites and cable news networks.

Part of that is completely understandable. Trump is still big news. He literally spent the past few weeks attempting a coup. While he failed, that doesn't change the history-making fact that he even tried, or that he got so much support. Certainly Biden, whose main activity is finding boring-but-competent people to staff his administration, can't compete with that, and there's no real indication that he wants to. (Unlike Trump, Biden views governing as a job and not just an opportunity to get attention.)

But there is no doubt that the media remains flatly fascinated with Trump, in no small part because, as Salon's Andrew O'Hehir argued Monday, "our readers and viewers have enabled and encouraged us at every step" and stories about Trump "outperform every other category of reporting, commentary or analysis we can possibly offer."

As Philip Bump at the Washington Post documented Tuesday, since Trump first announced his run for president, he "is the political figure who garners the most search interest, cable news mentions or screen time each month since June 2015."

Because of all this, it's become quite fashionable in some circles to haughtily declare that all this interest is tawdry, and that if we simply ignored Trump, he would go away. Hardly a week goes by on social media where I don't get some reader who, sick of it all, will lash out at me personally and demand that I stop writing about, tweeting about or otherwise giving attention to Trump.

But the command to ignore him didn't make the bully disappear in junior high school and it certainly doesn't work with the president. Nor can Trump's importance in our politics be easily reduced to a pop psychology assumption that all fascination is inherently addiction and therefore bad.

The reality is that the Trump obsession isn't really about Trump himself anyway. It's about his followers.

Don't get me wrong. I confess some interest in his psychology, which our traffic shows is widely shared. But let's face it — even on the sociopath scale, Trump's not as interesting as more exotic specimens like Ted Bundy or Jeffrey Dahmer. As a person, Trump is little more than the aged version of the yuppie villain in an '80s comedy, with a sweater tied around his neck and a sneer for the scruffy heroes. He only has two emotional registers, whining and bullying. He's boring.

Bump's own numbers show this. Prior to his presidential campaign, Trump wasn't an object of widespread fascination, no matter how much he hustled for attention. Ratings for his reality show were in the toilet and most people didn't think about him at all. It was only when Trump started to get support from everyday voters that he became the focal point of American politics.

The reason that Trump captures so much attention, year in and year out, is because of his followers. How did this two-bit moron who can barely read manage to attract a loyal following — one that has apparently grown from the 63 million people voted for him in 2016 to the 74 million who turned out in 2020? These people adore him, so much so that a quarter-million Americans dead and millions more unemployed only made them more determined to give it all up for the orange guy in an ill-fitting suit who wants to end democracy as we know it. It's a legitimately fascinating mystery.

The devotion of the Red Hats is, if anything, more bizarre because Trump is so tiresome. Going to one of his infamous rallies, for instance, is volunteering to be tortured, like being strapped to a chair while the biggest boor in the world rants incoherently at you for over an hour. Listening to him ping-pong endlessly between whining and bragging is a form of boredom that makes solitary confinement seem pleasant by comparison.

And it's not like his rally-goers felt differently. You could see it on the faces in the crowds, as his supporters would drift away, not really listening except to perk up to applaud at the mention of buzzwords ("Crooked Hillary," "build the wall", "Hunter Biden"), but never really paying much attention to what Trump was actually saying.

They weren't there for him, after all. They were there as a show of force, to let the hated liberals know that they had the numbers and the determination — so much so that they'd sacrifice a night of their preciously short lives listening to a  braggart ramble on about windmills and and lie about his own vitality for an hour. Trump will never understand this, but it was never about him. He was there for them, a vehicle for their resentments and, critically, their will to power. He was the weapon they wielded in their war to exert dominance over American politics, even as their actual numbers dwindle.

This movement is what is interesting, because it's ultimately, about the rise of American fascism. It's a real threat, as demonstrated by Biden's uncomfortably close margins in the same swing states Hillary Clinton lost in 2016. Indeed, it's arguable that these forces still won in 2020, as they (probably) kept control of the Senate, gained seats in the House and have overtaken the federal courts, kneecapping the ability of the majority of American voters, who support the Democrats, to exert their political will.

That the most powerful country in the world is being held hostage by an authoritarian, racist minority drunk on conspiracy theories is the biggest story in politics. It's part of a larger story about the entire world in the grip of rising authoritarianism. Their power will define Joe Biden's presidency. Their ability to cripple him will matter more than any of his Cabinet picks or even his executive orders.

Trump is just the shorthand for this very real and ongoing problem. The reason it feels like we can't quit Trump is that we can't quit the people who elected him. As Bob Cesca argued this week at Salon, we shouldn't pander to those people or seek to placate them, but we also can't just ignore them. Not while they still control so many levers of power.

Nowadays, most educated people reject the "great man" theory of history. We understand, intellectually at least, that even legendary villains like Hitler or heroes like FDR were a product of their time and not acting out of some cosmic destiny.

But it's still hard not to reduce politics to personality. Our brains are hardwired to focus on individuals, who have agency and psychology that we can understand, rather than the more diffuse motivations of the crowd.

But Trump could keel over tomorrow, never to tweet again, and he wouldn't go away. He might even grow in power, made into a martyr now that he can no longer embarrass his followers with his routine bouts of public idiocy, such as when he suggested people inject Lysol. Trump the symbol was always far more important than Trump the man. And no matter what happens to Trump the man, the movement he represents remains a live threat to American democracy, and to the world.