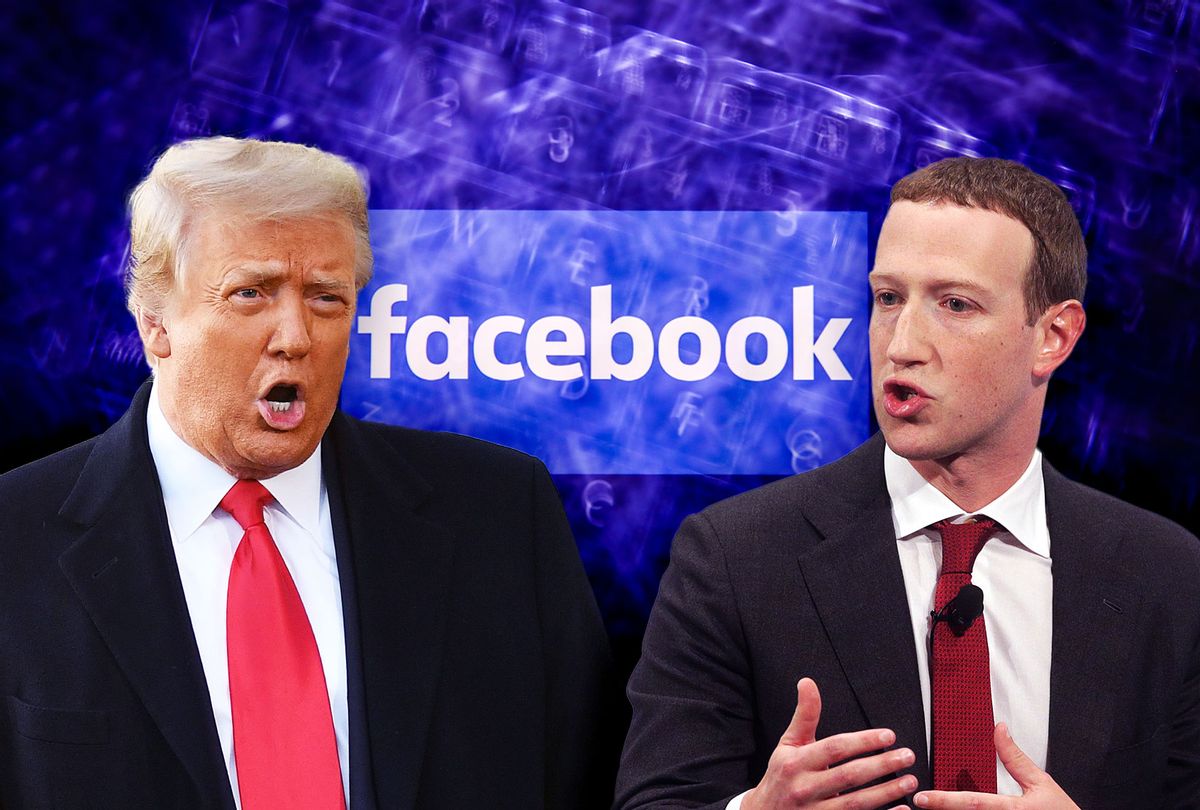 AT&T and Facebook are unaccountable. Donald Trump's still free. This week saw an overwhelming number of stories all pointing to the same conclusion: American authoritarianism is on the rise, juiced and protected by some of the richest and most powerful people in the United States.

Due to a combination of whistleblowers, investigations, and, in many cases, utter shamelessness on the part of fascism enablers, this is now out in the open. And yet, despite Democrats controlling both Congress and the White House, serious action to fight back and save American democracy remains underwhelming to nonexistent.

The Senate Judiciary Committee, for instance, released a sobering report this week detailing the extent of Donald Trump's efforts to force the Department of Justice to fabricate evidence for use as a pretext to nullify the 2020 election. The report details nine separate instances of Trump pressuring acting Attorney General Jeffrey Rosen to enact a scheme, concocted by another DOJ lawyer named Jeffrey Clark, to overturn the election. Trump was not exactly subtle about what he expected from Rosen. On January 3 — three days before Trump resorted to inciting violence in a last-ditch effort to overthrow the election — Trump called a meeting and opened it by complaining, "One thing we know is you, Rosen, aren't going to do anything to overturn the election."

As Heather "Digby" Parton writes at Salon, "The president of the United States tried for weeks to get the Attorney General to overturn the election. That is the definition of an attempted coup."

Senate Republicans are defending Trump on the grounds that this effort failed, which, as I point out in today's Standing Room Only newsletter, is the equivalent of saying attempted murder isn't a real crime. And the reason they're defending him is not mysterious. He's going to run again in 2024 — and will try to steal the election again, as well — and he does so with the full support of the GOP establishment, which is manipulating state election laws to make it easier for Trump next time.

This week, as well, Reuters published a disturbing report exposing how One America News, which can aptly be described as an authoritarian propaganda channel supporting Trump's demands to be installed illegally as president, is being bankrolled by the communications giant AT&T.

OAN's founder, Robert Herring Sr., not only claims that OAN was started at the request of AT&T executives but that court records show "AT&T has been a crucial source of funds flowing into OAN, providing tens of millions of dollars in revenue." AT&T defends this by saying they offer "many news channels that offer viewpoints across the political spectrum," but of course, OAN is not "news," because they heavily supported false claims that the 2020 election was fraudulent. OAN is profiting handsomely from Trump's insurrection, as the "network's online audience soared in November after conservative mainstay and OAN competitor Fox News affirmed Joe Biden's victory."

Fascist propaganda, it turns out, is very good business indeed. This ugly reality, that there's money to be made in elevating false, authoritarian propaganda, was also highlighted in the rolling news stories this week around Facebook, stemming from the revelations offered by whistleblower Frances Haugen.

Haugen collected thousands of documents during her time working for the civic integrity department at Facebook, which she says was marginalized precisely because having civic integrity is not good for profit. Haugen's documentation demonstrated what many have long suspected based on public evidence: Facebook knows that right-wingers are using their platform to spread disinformation and undermine democracy. They just don't care because authoritarian disinformation is wildly popular and therefore good for business.

This is why the right is freaking out and spreading conspiracy theories to discredit Haugen. They depend heavily on Facebook to distribute their false, inflammatory propaganda, and without it, their efforts to undermine democracy would lose a lot of power.

These stories are all troubling. The situation is clear-cut. There's a powerful authoritarian leader gunning to destroy democracy and install himself as the nation's leader. He has not just the full support of a major political party and the political power to arrange the laws to make this happen for him, but a propaganda apparatus that touches every corner of American life. Corporate interests may front like they oppose this, but behind the scenes, they offer material support to fascists because they see doing so as profitable. None of this is a secret.

And yet ... nothing substantive is being done.

The Senate Judiciary released a report detailing Trump's extensive efforts to overthrow democracy, and yet there's not a whiff of a hint that there's any movement from the Department of Justice to hold him criminally accountable for his actions. On the contrary, the DOJ is helping Trump, by shielding his Justice Department appointees from being questioned by congressional investigators. The assault on free and fair elections on the state level has been thoroughly documented, but legislation that would prevent these anti-democratic actions is moribund in a Democratic-controlled Congress because a couple of Democratic senators prioritize the filibuster over democracy itself. Democrats control some of the most powerful offices in the land, and yet they act helpless to stop the ongoing coup effort being conducted by a private citizen in Florida who has a criminal rap sheet many times longer than should be necessary to put him away for years.

There curiously has also been no accountability for the corporate interests who support rising fascism because it's in their financial interests to do so.

Haugen's whistleblowing efforts focused heavily on attempts to expose Facebook's role in spreading right-wing disinformation, but when she was brought up for a Senate hearing, it was to talk about teen girls and self-esteem, a problem even the Insurrectionist Caucus is happy to pull faces and claim to be upset by. It's an important issue, to be sure, but in the face of the literal end to American democracy, it's questionable whether teen self-esteem should be the main priority for the Senate when it comes to Facebook.

There's just no way out of it. The country is sleepwalking its way into an authoritarian overthrow of democracy.

There's plenty of journalism and exposés on all of these social forces Trump is exploiting to capture the White House in 2024. Yet, despite all of the noise, there's little in the way of action to change things. But it doesn't have to be this way.

Democrats have real power, and even if a couple of no-good centrist Democrats are standing in the way of electoral reform, there are surely other actions that could be taken to stop Trump. A lack of imagination and political cowardice, however, is inducing this attitude of helplessness in Democrats. And it's one that Trump will all too easily exploit to get his way.