Lock him up! If Trump refuses to leave the scene after his defeat, there's an obvious solution

To heal the country, Donald Trump needs to go away. He won't do it on his own, so prosecution is the only answer 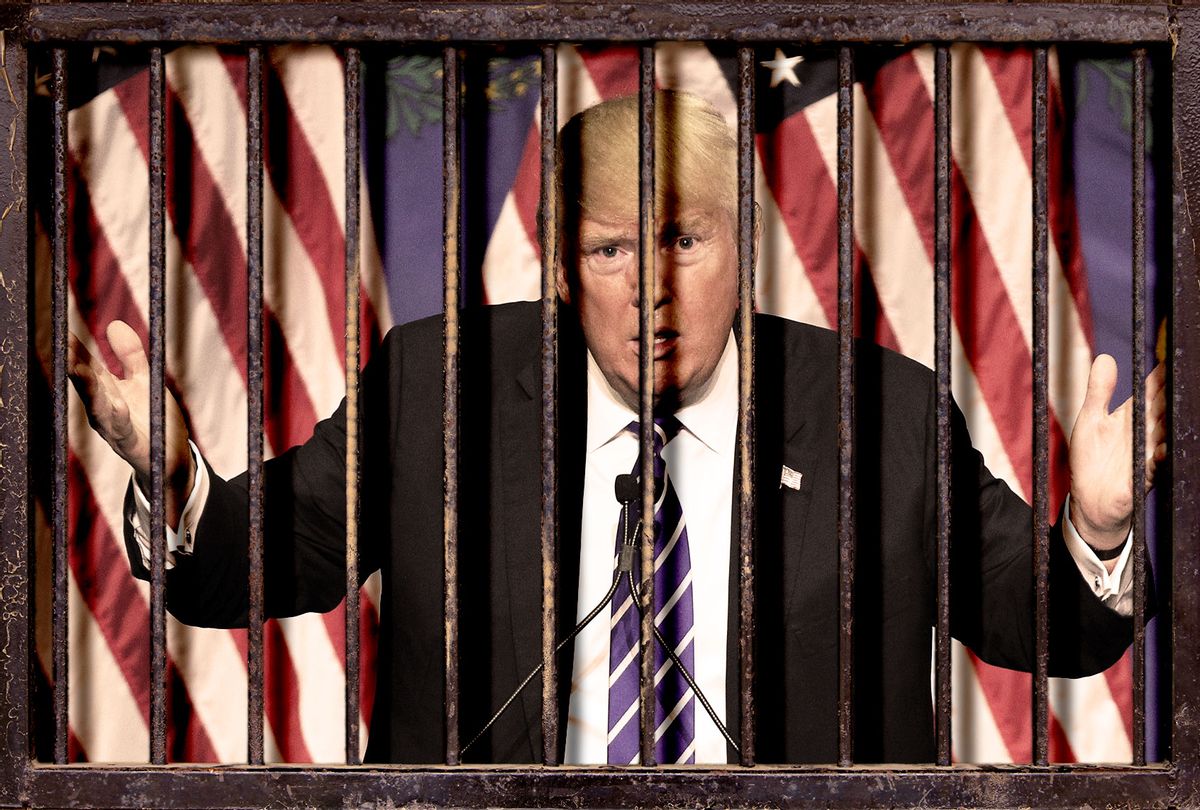 The national celebrations after Joe Biden decisively defeated Donald Trump in this month's election focused heavily on the image of Trump being pushed out the door. People took to the streets and boogied down to Steam's 1969 hit "Na Na Hey Hey Kiss Him Goodbye." Signs carried by celebrants tended to focus more on Trump's loss than Biden's victory. During Saturday's underwhelming MAGA march in Washington, counter-protesters chanted, "Trump, pack your shit! You're illegitimate!"

Alas, like Freddy Krueger or the shark from "Jaws," Trump will not be easy to get rid of. It's not just that he refuses to concede and keeps telling his supporters he will find some legal miracle to invalidate the election, a ruse that stopped being serious several days ago and is now mostly the mercenary pitch of a con man.

"Donald Trump may not be president much longer, but he still wants to run the Republican Party for the foreseeable future," David Jackson and Phillip M. Bailey write in USA Today. "From setting up a political action committee to suggesting he might run again in 2024, Trump is already working to keep his hold on the GOP after his term ends."

And as Maggie Haberman reported in the New York Times last week, "Mr. Trump is talking seriously about announcing that he is planning to run again in 2024."

Trump likes to talk, of course, and most of what he says is hot air. As Haberman writes, Trump is merely "trying to survive from one news cycle to the next" — as if "surviving" the news cycle somehow means anything after losing an election — and his energies are focused on not losing his grip on "his Republican base," the cow he milks for endless attention and vast amounts of cash.

Still, Trump's desperation to keep his name in the headlines — and to keep money and adoration flowing from his gullible supporters — is bad news. While it's true that Trump's divisiveness and authoritarianism is a symptom of the country's increasingly toxic culture war, and not the principal cause, it's also true that he's throwing gasoline on the fire and making things worse. By keeping up a constant stream of lies and conspiracy theories, Trump is training nearly half the country to believe that lying in the service of MAGA is no sin. He's helping to radicalize conservatives who might otherwise have had some attachment to reality and common sense, and creating permission for the right to be openly anti-democratic and bigoted in ways it largely shied away from before.

Biden ran on a campaign of unity and healing, which rightfully drew skepticism from those who believe that's impossible in our current climate. But if Biden has any hope of even moving toward those goals, Trump himself is a major obstacle. With Trump out there daily, generating conspiracy theories and trying to get press attention — or worse, running yet another four-year campaign, this time against a Democratic incumbent — unity and healing will be not just elusive, but impossible.

The only solution to this problem is for Trump to be too busy trying to stay out of jail — or too busy sitting in jail — to be the forever-candidate. To save America, Biden's Department of Justice and state prosecutors in New York should focus on holding Trump accountable for all the various alleged or apparent crimes he's committed. Trump's executive privilege ends on Jan. 20 at noon Eastern time. That's when the prosecutions should begin.

The list of such crimes is so long that the only real question should be where to start.

There's campaign finance fraud involving the illegal payoff to Stormy Daniels to cover up a sexual encounter, for which Trump's former lawyer, Michael Cohen, was already sent to prison. Because of the shield of executive privilege, Trump was merely called "Individual 1" in the court documents for that case. Now he can be unveiled and, ideally, serve his own stint in prison for that crime.

There's also the extensive obstruction of justice Trump committed in office, which, again, would have been prosecutable but for executive privilege. Special counsel Robert Mueller's report on the investigation of Russian interference in the 2016 election documented at least 10 instances of potential obstruction of justice. As Mueller testified in a congressional hearing in 2019, Trump can still be indicted for these offenses when he leaves office.

Trump could also be hit with charges related to obstruction of justice in the Ukraine probe. As the Democratic-controlled House of Representatives amply demonstrated in their articles of impeachment against Trump, the president repeatedly abused his power to block subpoenas and other information that Congress had a right to access. The Republican-controlled Senate may have acquitted Trump for political reasons, but the Justice Department under Biden would be free to throw the book at Trump.

There are so many more probably or plausibly illegal things Trump has done that a hard-working prosecutorial office could likely draw up charges for. There are more than two dozen accusations of sexual assault, some of which may still fall within the relevant statute of limitations. There's the extensively documented likely tax fraud — and now there's no Trump to get in the way of releasing Trump's tax returns. There may also have been prosecutable crimes associated with the incident that got Trump impeached, which was extorting the Ukrainian president in an attempt to force him to defame Biden in the press.

One can already hear the objections, of course: Unleashing the DOJ to go after a defeated ex-president could make Biden appear vindictive and divisive. There have even been calls for Biden to pardon Trump so the country can "move on. (Fortunately, Biden has promised not to do that.)

Biden himself is on the fence about this issue, saying that prosecuting a former president would be "very unusual thing and probably not very good for democracy" but also that he wouldn't "interfere with the Justice Department's judgment" on this front.

The good news is there are ways for Biden to let the Trump prosecution proceed in a less political way. As Renato Mariotti writes in Politico, the new attorney general can appoint a special counsel who "should be a career prosecutor who has no connection to Biden or his team" to run the investigation. That wouldn't stop all criticism, of course, but could blunt it significantly.

Whatever the details, the grim truth is there is no "moving on" unless Donald Trump faces real accountability. For one thing, Trump won't let the country move on. He'll be running for president all over again, exploiting his status and power to continue stoking right-wing anger and spreading conspiracy theories. To make it worse, watching Trump get off scot-free will encourage a thousand mini-Trumps to bloom, as more GOP politicians realize they can break whatever law they desire without consequence. It could also have the impact of demobilizing the left, just when Biden needs their support the most, because so many progressives will be angry at Biden and the Democrats for failing to hold Trump to account.

No, in order to heal the nation, Trump needs to be prosecuted. Biden will have to swallow the unpleasant pill of weathering bad-faith accusations and negative media commentary, by both hiring people who have the guts to do it and letting them loose to do their job. Unity cannot be achieved by letting bad people get away with crimes. We need a reckoning, and real justice, before the process of healing can begin.