How to stop an Insurrection Caucus: These reforms could reduce GOP extremism and save our democracy

There were two mobs behind the Capitol riot: One in MAGA hats, the other in expensive suits. Both did immense harm 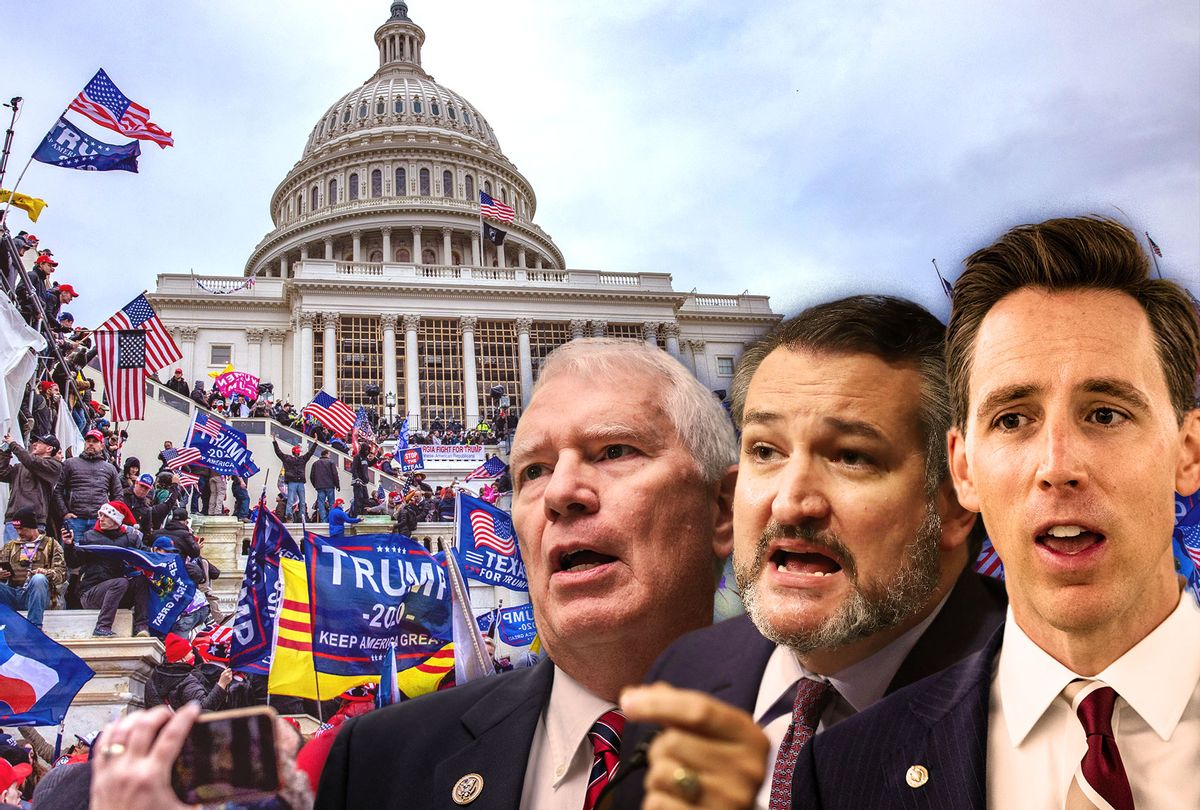 The mob smashed windows then stormed into the U.S. Capitol. They brandished flags that supported Donald Trump and the confederacy, and messages that proclaimed "stop the steal" and "no more bullshit." They created an armed standoff at the doors of the House floor, disrupted the constitutional process of certifying the presidential election, and forced lawmakers to barricade themselves behind closed doors fortified with chairs and file cabinets.

Then, many hours later, as a nation reeled, after news anchors spoke of sedition and insurrection in our own capitol, even a coup, determined lawmakers returned to both chambers to finish their work. They filed past broken windows, ransacked offices, even walls newly marked with bullet holes. And then a majority of House Republicans and two ambitious senators eager to seek the White House voted to overturn the results from Pennsylvania and Arizona, citing "fraud" they could not prove and baseless "irregularities" no court or state election official would accept.

One mob wore homemade Trump t-shirts and MAGA caps. The other wore expensive suits and congressional pins. Both have done incalculable damage to the American experiment.

The MAGA mob has been dangerously misled. They have been lied to by their president for months and told that an election Donald Trump clearly lost has been stolen from them. These falsehoods have been amplified by Fox News hosts and other conservative media sources, then echoed unchecked across new social media sites such as Parler and Gab. Then, on Wednesday, Trump addressed his followers at a Washington rally and incited them to storm the Capitol. It should have surprised no one, especially not the Capitol Police, that a violent riot would ensue.

But these Republican lawmakers, educated from fancy universities and law schools, entrusted with leadership, sworn to uphold the Constitution: Just what could their justification be for behavior every bit as insurrectionary? The bitter truth is that our political system encourages today's Republican party to weaponize gerrymandering, voter suppression and other forms of minority rule. Our elections incentivize this behavior, and then reward politicians who pour gasoline onto the polarization and divisions that helped create them.

We are trapped in a death spiral. Democracy reform must be job one. There's much to be done, and the task could hardly be more urgent.

The good news: House Bill 1, the For The People act; and House Bill 4, the John Lewis Voting Rights Act would go a long way toward reversing those incentives and protecting our democracy by requiring independent commissions — not self-interested partisans — to draw all U.S. House districts, create national election standards and restore the full protections of the Voting Rights Act that have been gutted by the U.S. Supreme Court and further eroded by GOP-controlled state legislatures over the last decade. It's also time for a national discussion on how single-member, winner-takes-all congressional elections aid and abet broken government and polarization; the Fair Representation Act, introduced the previous two Congresses by Virginia congressman Don Beyer, would end this root problem and create proportionality and swing seats everywhere by introducing a system of larger, multi-member districts with winners chosen through ranked choice voting.

Make no mistake: The GOP's 139-member Insurrection Caucus has been built, in part, by partisan and racial gerrymandering. It is dominated by members from states — Texas, Ohio, Florida, Georgia, Wisconsin, North Carolina, Alabama, Tennessee and others — where Republicans drew district lines that packed Democrats and Black voters into a handful of seats they win overwhelmingly, then diluted the rest of those voters across as many safe GOP districts as possible. That does two things. First, it ensures Republicans win a percentage of seats that's far higher than their statewide vote total entitles them. And second, it creates uncompetitive districts where all the action moves to the party primary, all but ensuring that the winners are selected only by the most extreme base voters in a low-turnout summer primary.

This warps our politics. It creates a different kind of member, one who is now accountable not to all voters, but just to the most partisan base. The Insurrection Caucus members know that they can't lose a general election. These members fear only a primary challenge. They govern accordingly. The certification challenge was led by Alabama congressman Mo Brooks. Alabama Republicans drew maps that segregated the vast majority of Black voters into one district, ensuring that the GOP carries the other six. The lines are so tilted that even when former Sen. Doug Jones won statewide here in 2018, he only carried one of the state's congressional districts.

At the White House, the post-election charge was led by chief of staff Mark Meadows, who began the decade as a small-town sandwich shop owner and, thanks to GOP gerrymandering, ended it as one of the most powerful men in politics. When North Carolina Republicans took power in 2010 and set out to draw a map that ensured they'd win 10 of the 13 congressional seats in this purple state, they started by cracking liberal Asheville, the largest city in western North Carolina, in half, and dividing the Democratic voters into helpless minorities in two districts certain to elect a Republican. Meadows made sure that would be him by running as a birther and vowing to send Barack Obama "back to Kenya." He won the primary with less than 40 percent of the vote and was quickly on his way to Washington, where he filed the parliamentary mention that cost John Boehner the speakership and forced the 2013 government shutdown.

Meadows' district wasn't the only one drawn by establishment Republicans after 2010 to try to hold onto power in a changing nation, that instead created a new insurgent class on the right. At the national level, the demographic change reshaping American politics was an electorate growing younger, more urban, and multiracial. Redistricting allowed Republicans to manicure a different electorate that resemble a right-wing fantasia completely detached from the rest of the nation. The New Yorker broke down the numbers after Meadows' 2013 shutdown stunt and found that the average House GOP district became 2 percentage points whiter in 2012. The average "suicide caucus," as they were dubbed, district — which looks very much like the Insurrection Caucus — was 75 percent white, compared to 63 percent nationwide. Half as many Latinos lived in those districts—9 percent compared to 17 percent nationally. Barack Obama defeated Mitt Romney by 4 percentage points that year. Not in suicide caucus nation, however, which Obama lost by a 23 percentage point landslide. The Republicans conjured themselves a fantasy nation where their base gained power even as it shrunk.

In the Senate, meanwhile, Ted Cruz (R-Texas/Harvard Law) and Josh Hawley (R-Missouri/Yale Law) fully understand that Congress lacked any constitutional authority to override Democratic electors from Pennsylvania and Arizona; the Senate's role was merely to open, then count, the votes. But because both senators also aspire to the GOP's 2024 presidential nomination, they made the political calculation to oppose certification and play to large numbers within the base of Republican primary voters who believe the lies they have been fed about voter fraud. They played footsie with authoritarianism in the name of their own ambition.

They're simply following Trump's path. Our method of selecting presidential nominees encourages this irresponsibility; in 2016, after all, Trump soared to the front of the Republican pack by winning consistent plurality wins in the 33 percent range. He never won a majority of votes in any primary state until New York in mid-April, well past two months into the race. Polls showed Trump losing head to head match-ups against every major Republican challenger. The rules, however, rewarded the polarizing candidate that an extreme segment of the party liked best, even though a large majority preferred someone else.

If we want to put an end to minority rule, and to elect representatives accountable to everyone once more, we must reform the election laws and a presidential nominating process that allows intense factions to maintain power and dominate politics with fewer votes. Democracy simply does not function when one of our two parties is controlled by those who baselessly question the legitimacy of any election they do not win.

This should be an American question, and not a partisan one. Indeed, when these reforms are put before voters, they're widely popular among Democrats, Republicans and independents. But the reality of our politics, however, is that the Republicans have been taken over by this minority faction, and it's the Democrats who will have to lead the way. They have only a small window in which to act. They hold a slender majority in the House and have no room for error in a tied Senate. The party in power tends to lose seats in the midterm, and Republicans could reclaim the House simply through redistricting; the GOP will have unilateral power to remake maps and erase Democratic seats in Texas, North Carolina, Florida, Kansas, Kentucky and elsewhere. They'll use it. After all, while the MAGA mob indulged their Sons of Anarchy cosplay throughout the Capitol, the junior insurrection caucuses in the Georgia state legislature got back to work and proposed strict new limits on absentee and mail-in voting, hours after massive voter turnout propelled two Democrats to the U.S. Senate, including the state's first-ever Black senator.

Republicans who want a different future, who want to liberate their party from the Insurrection Caucus, compete for the presidency after losing the national popular vote in seven of the last eight elections, who value representative democracy over factionalized minority rule, should join this reform crusade. Your party, and the nation, will be under the grasp of authoritarians until you do. The MAGA mobs that desecrated the Capitol on Wednesday will eventually be brought to justice. It's the mob that was welcomed back inside and then immediately attempted to lay waste to a free and fair election that provides the far more serious threat.