Despite the violence and death Wednesday, the majority of House Republicans voted in support of Trump's coup 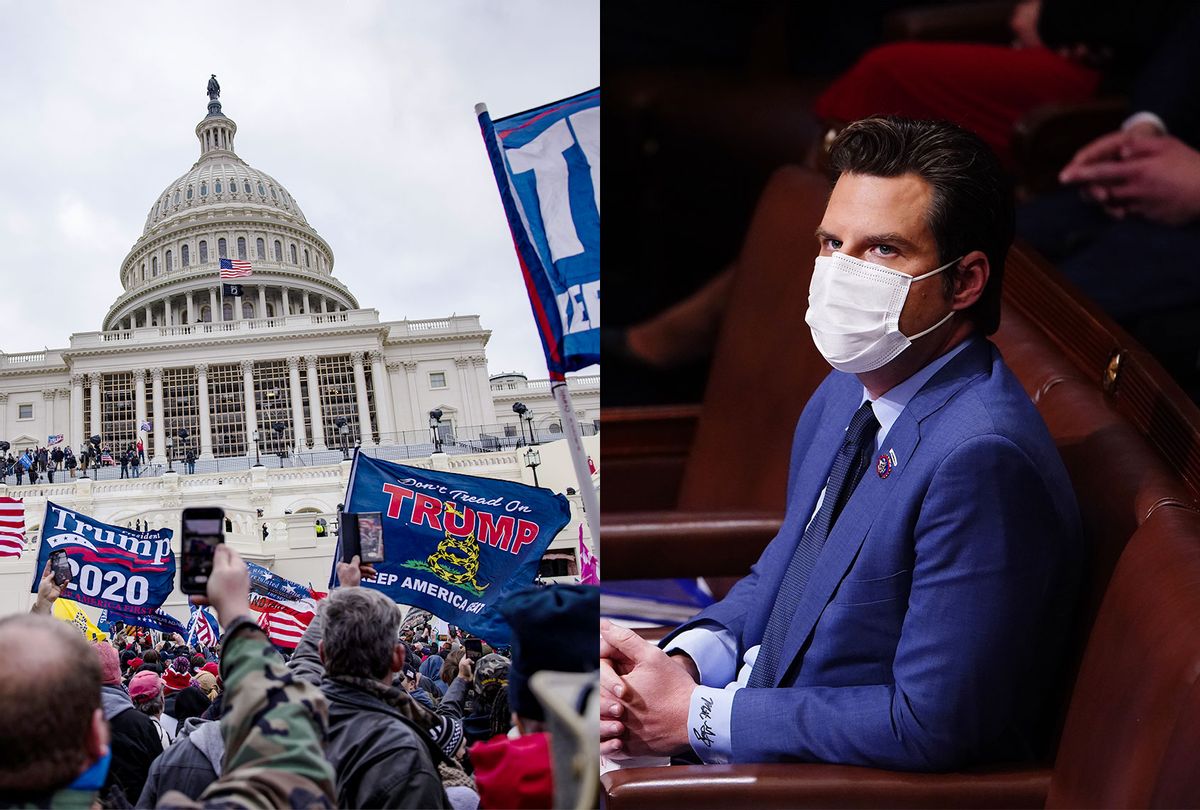 Calling for "peace" was the word of the day on Capitol Hill Wednesday, after an insurrectionist mob overran the U.S. Capitol, in what was ultimately a failed attempt to prevent Congress from affirming Joe Biden's victory in November's presidential election. Some politicians — mostly Democrats, but a few clearly rattled Republicans — meant these words of peace. But some, most obviously Donald Trump himself, did not.

In his repeated messages to supporters Wednesday and into Thursday, Trump made sure to sandwich every mealy-mouthed wish for peace in between carbo-loaded language inciting more violence by continuing to insist that he won "a sacred landslide election victory" and that it's being "unceremoniously & viciously stripped away."

Even after Twitter blocked his account for inciting violence, Trump kept talking out of both sides of his mouth. He released a statement with the words "orderly transition" in it — to please mainstream media headline writers — the bulk of it, however, continued with the violence-fomenting lies. "I totally disagree with the outcome of the election, and the facts bear me out," he insisted. Needless to say, the actual facts are that Biden won and there is no evidence whatsoever of widespread voter fraud.

As Kaitlan Collins of CNN reported late Wednesday, White House aides described Trump as "borderline enthusiastic" when the mob overran the Capitol Building. His belated calls for peace should be understood by his opponents as it is understood by his supporters: empty ass-covering.

His real message, which is not subtle, is that he loves the violence.

But how many other Republicans, especially Republicans with power, agree with Trump? How many can we safely assume are full of it when they speak of peace? Well, just look at how many still support his coup.

Right now, those numbers are hard to gauge in the general public, though YouGov did a useful snap poll showing the majority of Republican voters — 68% — refused to describe an overt attempt to steal an election through violence as a threat to democracy. Forty-five percent of those Republicans went so far as to openly cheer the insurrection, but that 68% number is likely closer to the real support levels. It shows who is happy to go along with it, even if they make frowny faces and pretend that they don't like the more violent aspects of trying to overthrow a democratically elected government.

The real reason is, of course, that an increasing number of Republicans believe that elections cannot be legitimate if Democrats win them.

This is one of those classic situations where watching what people do matters a whole lot more than what they say, an aphorism that's particularly important when dealing with fascists, autocrats and others flavors of authoritarian, who have always been fond of playing peekaboo when it comes to their real beliefs. (Literally, philosopher Jean-Paul Sartre wrote about this in the 1940s, when the authoritarian flavor of the day was actual Nazis.) There was lots of talk about desiring peace and civility on Capitol Hill yesterday, but when it came down to brass tacks, the majority of Republicans in the House sided with violent insurrectionists on the subject of whether or not a legitimate election should be overthrown and an illegal president installed into office.

In his remarks yesterday, Biden said, "The scenes of chaos at the Capitol do not reflect a true America, do not represent who we are. What we're seeing is a small number of extremists dedicated to lawlessness."

The first part of that statement is true, at least when it comes to America circa 2021. The majority of Americans are repulsed by the insurrection. The second part of that statement, however, is false. That was no small fringe of Americans, but people who represent the mainstream view of the Republican Party, most of whom support Trump's illegal efforts to hang onto power. That most don't have the physical courage to storm the capital — a group that includes Trump himself, who hid in the White House after falsely promising his supporters he would join them — doesn't change that fact. What matters is that they share the goals of the violent mob.

Granted, the GOP should be, based on sheer numbers, a minority party. Instead, it is wildly overrepresented in government, due to an outdated Constitution that gives more power to voters in sparsely populated areas than in dense urban areas. There should be no doubt that this disproportionate hold on power is one major reason Republicans are becoming increasingly radical. If they had to win over majorities of Americans, instead of just pandering to a right-wing minority that is concentrated in rural and suburban areas, Republicans would likely be more moderate.

But it's also true that 74 million Americans voted for Trump's reelection — while not the majority, is nearly 47% of the voters. That's a shockingly high number of people who backed a man who repeatedly signaled, before the election, that a violent coup was on the table should he lose.

No doubt some of those voters convinced themselves Trump was blowing hot air, and are not happy about how things are going right now. And that was almost certainly the case with some Republican members of Congress, who had been planning to vote in favor of throwing out the electoral college results but changed their mind after they were chased out of the congressional chambers by a violent mob of red hat idiots. In the Senate, most of the "sedition caucus" — 13 or so Republican Senators who were going to vote in favor of objections to counting ballots from some states Biden won — changed their minds, and voted down the objections.

But not all. Sen. Ted Cruz of Texas put out a statement denouncing the insurrectionists, calling the riot "an act of terrorism." But then he went ahead and sided with the people he deemed terrorists, taking to the Senate floor in the hours after the assault to object to counting the votes from Arizona.

Sen. Josh Hawley of Missouri, on Wednesday afternoon, issued a similar smarmy statement declaring, "Violence is not how you achieve change." He then exposed his true allegiance to the insurrectionists by giving them exactly what they want: A motion to throw out the votes of the entire state of Pennsylvania.

Empty condemnations of violence are meaningless. What Hawley, Cruz, and the majority of House Republicans are standing for is a belief that elections should be voided if they don't like the results, and that it's okay to lie and cheat in order to steal elections. That kind of belief system inevitably leads to political violence, because it shares the same logic as political violence, which is that if you don't get what you want by playing fairly, you need to break the rules.

In many ways, Wednesday was a good day — two Democrats won Georgia's Senate run-off races, and, despite the chaos, Biden's victory was affirmed. But we cannot give in to pressure to shrug off Wednesday's events as some meaningless one-off event, not when the majority of Republicans support the aims of the insurrectionists.

Two things can be true at once. It can both be true that the wheels of democracy worked this week. It is also true our democracy is in serious danger, as long as the majority of Republicans keep down this path of authoritarianism. If we let Wednesday's victory lull us into a belief that everything is fine and the system is working, the next time Republicans try to overturn an election, they'll be able to pull it off.