“Unthinkable”: Trump’s says "get rid of the ballots," and "there won't be a transfer of power"

"In the United States of America, we do not ‘get rid of’ ballots," FEC Commissioner Weintraub says. "We count them" 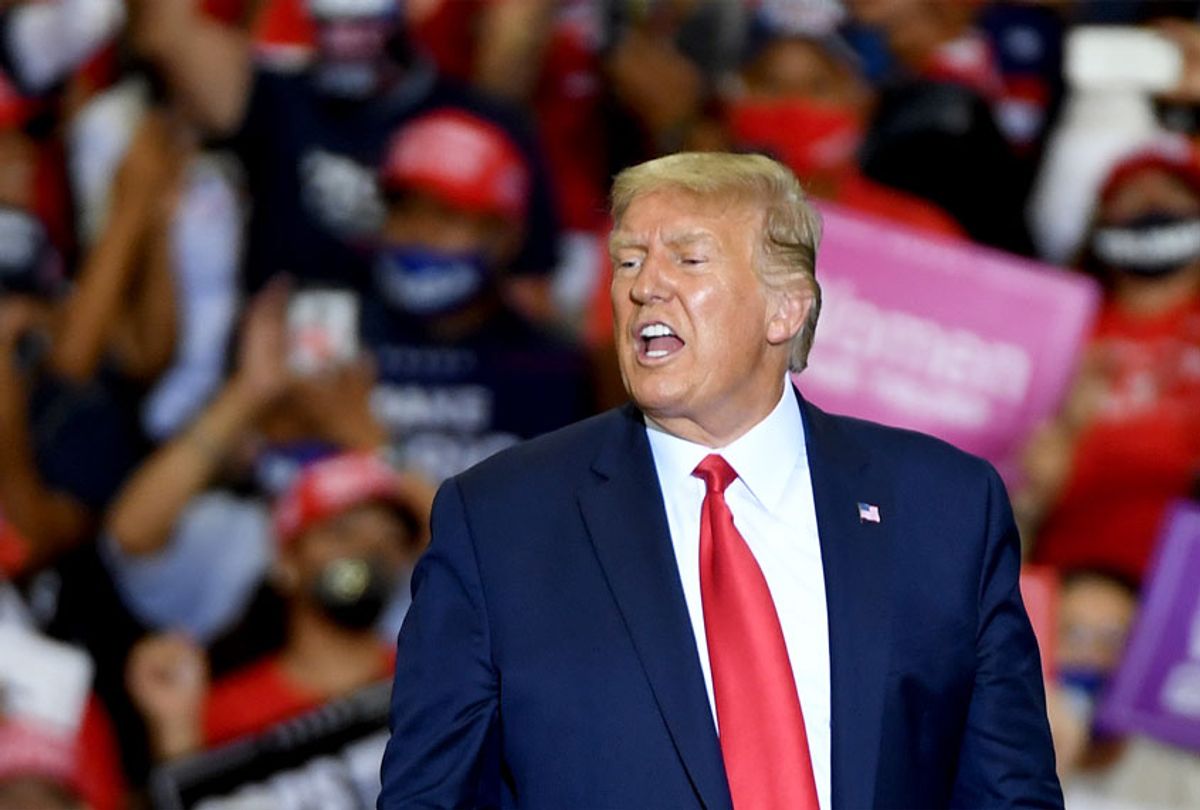 U.S. President Donald Trump leaves the stage after speaking at a campaign event at Xtreme Manufacturing on September 13, 2020 in Henderson, Nevada. Trump's visit comes after Nevada Republicans blamed Democratic Nevada Gov. Steve Sisolak for blocking other events he had planned in the state. (Ethan Miller/Getty Images)
--

President Donald Trump on Wednesday appeared to refuse to commit to a peaceful transfer of power, sparking concerns on both sides of the aisle.

Trump continued to push debunked conspiracy theories about voting by mail to sow doubt in the election during a news conference at the White House before suggesting that if we "get rid" of mail-in ballots there would not be a transfer of power.

"Well, we're going to have to see what happens," Trump told reporters. "You know that I've been complaining very strongly about the ballots, and the ballots are a disaster.

"We'll want to have — get rid of the ballots, and you'll have a very — we'll have a very peaceful — there won't be a transfer, frankly," he added. "There'll be a continuation."

Trump has repeatedly refused to say that he would accept the results of the election, telling Fox News in June that he would "have to see" as he pushed a baseless charge that voting by mail would "rig the election." Voting by mail has repeatedly been shown to be secure and has numerous safeguards to prevent voter fraud, which is virtually nonexistent.

Trump and first lady Melania Trump have voted by mail and even urged the president's supporters to do so. At the same time, the president has attempted to sow doubt in the integrity of the vote as his campaign has pushed lawsuits over states' expansions of voting by mail.

Trump said he is "counting" on federal courts to determine the winner of the election. He also suggested to reporters in the Oval Office earlier on Wednesday that he wanted to have his Supreme Court pick confirmed by the election for that exact reason.

"I think this will end up in the Supreme Court, and I think it's very important that we have nine justices," he said. "And I think the system's going to go very quickly."

Asked by reporters about Trump's remark, Democratic presidential nominee Joe Biden replied, "What country are we in?"

"He says the most irrational things," Biden said. "I don't know what to say to that. It doesn't surprise me."

"This is how democracy dies," he tweeted. "A president so desperate to cling to power that he won't commit to a peaceful transition of power. That he seeks to throw out millions of votes. And a Republican Party too craven to say a word."

Republicans pushed back on Trump's comments as well.

"There will be an orderly transition just as there has been every four years since 1792," said Senate Majority Leader Mitch McConnell, R-Ky.

"There will be a smooth transition, and I believe President Trump will have a very good inaugural," House Minority Leader Kevin McCarthy, R-Calif., told reporters.

"Fundamental to democracy is the peaceful transition of power; without that, there is Belarus," tweeted Sen. Mitt Romney, R-Utah, who said he would support a Supreme Court confirmation ahead of the election. "Any suggestion that a president might not respect this Constitutional guarantee is both unthinkable and unacceptable."

"Nothing defines our Constitutional Republic more than the peaceful transition of power. I've taken an oath to support and defend the Constitution, and I will uphold that oath," Rep. Steve Stivers, R-Ohio, the former chairman of the National Republican Congressional Committee, said. "Regardless of how divided our country is right now, when elections are over and winners are declared, we must all commit ourselves to the Constitution and accept the results."

"In case anyone is unclear on the concept, in the United States of America, we do not 'get rid of' ballots. We count them," she said on Twitter. "Counting the ballots – *all* the ballots – is the way we determine who leads our country after our elections. The only way."