"Tell me how this would not spell the end of this supposedly great deliberative body," Chuck Schumer says 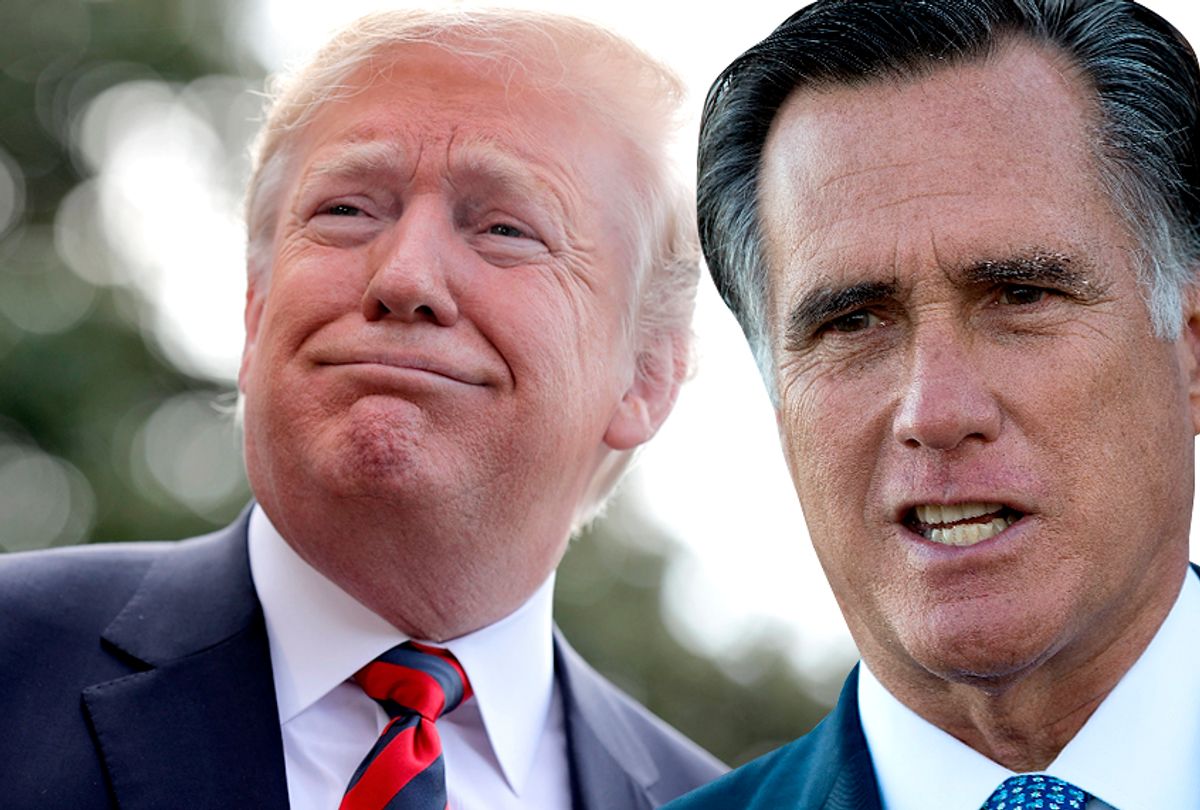 Sen. Mitt Romney, R-Utah, on Tuesday announced that he would vote for President Donald Trump's nominee to fill the late Justice Ruth Bader Ginsburg's seat on the Supreme Court, even though ballots have already been cast in the 2020 election. The move makes it all but certain that the Republican-led Senate will vote on Trump's pick before Inauguration Day.

Trump said in a tweet a few minutes before Romney's announcement that he would announce his nominee this weekend. In a statement posted to Twitter, Romney cited his support of "the immutable fairness of following the law, which in this case is the Constitution and precedent."

"My decision regarding the choice of a Supreme Court nomination is not the result of a subjective test of 'fairness,' which, like beauty, is in the eye of the beholder. It is based on the immutable fairness of following the law, which in this case is the Constitution and precedent," Romney said. "The historical precedent of election year nominations is that the Senate generally does not confirm an opposing party's nominee but does confirm a nominee of its own."

"The Constitution gives the president the power to nominate and the Senate the authority to provide advice and consent on Supreme Court nominees," he added. "Accordingly, I intend to follow the Constitution and precedent in considering the president's nominee. If the nominee reaches the Senate floor, I intend to vote based on their qualifications."

Two Republican senators, Lisa Murkowski of Alaska and Susan Collins of Maine, had pushed back on a vote pending the results of the November election. With Romney's announcement, the party's 53-seat majority can now confidently move ahead with its election-year effort to shift the ideological balance of the court, perhaps for decades.

Republicans claim that the two cases cannot be compared, and the issue is one of checks and balances. The Senate and presidency were controlled by opposite parties in 2016, whereas the same party controls both four years later.

But GOP leaders were not always so specific back in 2016.

"The American people should have a voice in the selection of their next Supreme Court justice," McConnell said at the time.

Speaking on the chamber floor in 2016, Sen. Tom Cotton, R-Ark., said, "Why would we squelch the voice of the people? Why would we deny the voters a chance to weigh in on the makeup of the Supreme Court?"

Asked by Fox News host Chris Wallace on Sunday whether he was selectively abandoning that reasoning, Cotton responded, "Chris, the Senate majority is performing our constitutional duty and fulfilling the mandate that the voters gave us."

Republican Senators won praise from conservatives in January for holding their ground on impeachment, framing the argument as one for voters to decide.

"The Constitution does not give the Senate the power to remove the president from office and ban him from this year's ballot simply for actions that are inappropriate," Sen. Lamar Alexander, R-Tenn., said at the time. "The question then is not whether the president did it, but whether the United States Senate or the American people should decide what to do about what he did. I believe that the Constitution provides that the people should make that decision in the presidential election."

With six weeks to go before Election Day, the vast majority of those same senators appear willing to apply a different measurement to a similar constitutional power.

Speaking Monday on the chamber floor, Senate Minority Leader Chuck Schumer, D-N.Y., called the GOP's rationale "completely contradictory," "unjustifiable" and a "preposterous" betrayal of his own standards that would "spell the end" of the Senate.

"Why not just come to the floor and say, 'I'm going to do whatever is best for my political party, consistency be damned, reason be damned, democracy be damned,'" Schumer said. "They know there is no reason — no reason, no argument, no logic — to justify flipping your position 180 degrees and calling it some kind of principle. It is not. It utterly craven — an exercise in raw political power and nothing more."

He continued, "If a Senate majority over the course of six years steals two Supreme Court seats using completely contradictory rationales, how could we expect to trust the other side again? How can we trust each other if when the stakes are highest, the other side will double-cross their own standards when it's politically advantageous?"

"Tell me how this would not spell the end of this supposedly great deliberative body," Schumer concluded, "because I don't see how,"