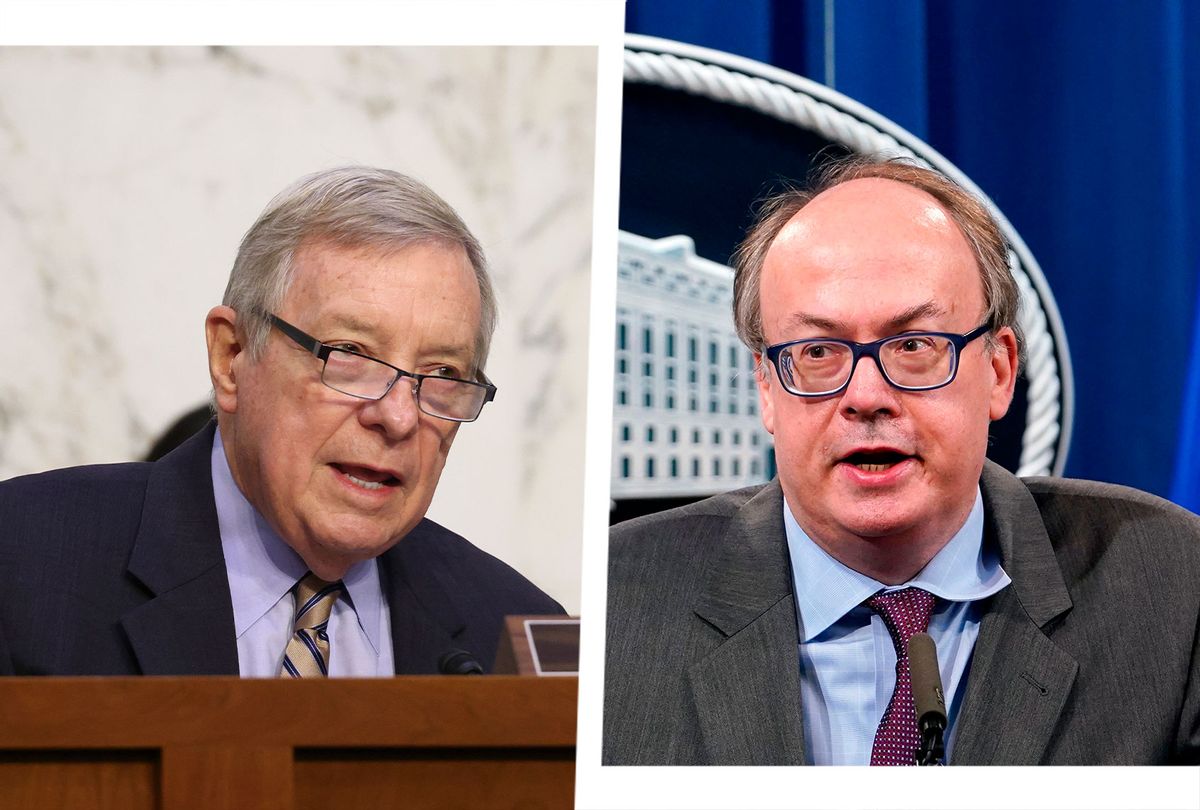 Senate Judiciary chairman Dick Durbin, D-Ill., is calling on the D.C. Bar to probe whether Jeffrey Clark, the head of the Justice Department's civil division during the Trump administration, attempted to "enlist" the agency in the former president's efforts to overthrow the 2020 election results.

"I respectfully request that the office of Disciplinary Counsel open an investigation to determine whether Mr. Clark, who is a member of the D.C. Bar, violated applicable D.C. Rules of Professional Conduct and should be subject to disciplinary action," Durbin wrote in a Thursday missive.

The letter comes on the heels of a Thursday report released by the Senate Judiciary Committee detailing Trump's varied efforts to weaponize the Justice Department against then-President-elect Joe Biden. According to the report, Trump called upon the House Freedom Caucus, a coterie of hardline pro-Trump Republicans, as well as Rep. Scott Perry, a low-profile Pennsylvania conservative in his election coup attempt.

At Trump's behest, Perry reportedly arranged a December call with Richard Donoghue, then the Justice Department's second-in-command, asking Donoghue to look into the "things going on in Pennsylvania" with respect to ballot-counting.

According to POLITICO, Perry also recommended to Donoghue that the then-acting attorney general, Jeffrey Rosen, be replaced with Clark, who was seen as more sympathetic to Trump's baseless claims of election fraud. Back in December, Clark circulated a letter, obtained by ABC News, encouraging the Georgia legislature to convene a special session to probe allegations of election fraud.

"The Department will update you as we are able on investigatory progress, but at this time we have identified significant concerns that may have impacted the outcome of the election in multiple States, including the State of Georgia," Clark wrote at the time, massively overstating the department's findings, which entailed no election-altering evidence of fraud.

But Clark's letter needed the approval of Rosen and Donoghue – and Donoghue shot the letter down, saying there was "no chance that I would sign this letter or anything remotely like this."

Frustrated by the obstacles posed by Rosen and Donoghue, Trump at one point threatened to replace Rosen with Clark, but the plan disintegrated when it became clear that the entirety of the department's top leadership would resign en masse if the replacement was made.

Durbin is alleging that Clark, in his capacity as a DOJ official, violated "at least four" prohibitions in the D.C. Bar's code of conduct.

Durbin's isn't the first request asking a state bar to investigate the apparent misconduct of Trump's past and present allies.

On Wednesday, a coalition of two dozen high-power attorneys asked the California Bar to investigate the activities of John Eastman, a right-wing attorney that reportedly drafted a six-point plan – now dubbed the "Eastman memo" – to undermine Biden's win at Trump's behest. The memo called for former Vice President Mike Pence to replace a number of electors in battleground states with Trump-appointed officials in order to turn the electoral count in Trump's favor.