"They're all here, vaccinated and boosted": Biden roasts Fox News hosts at WHCD 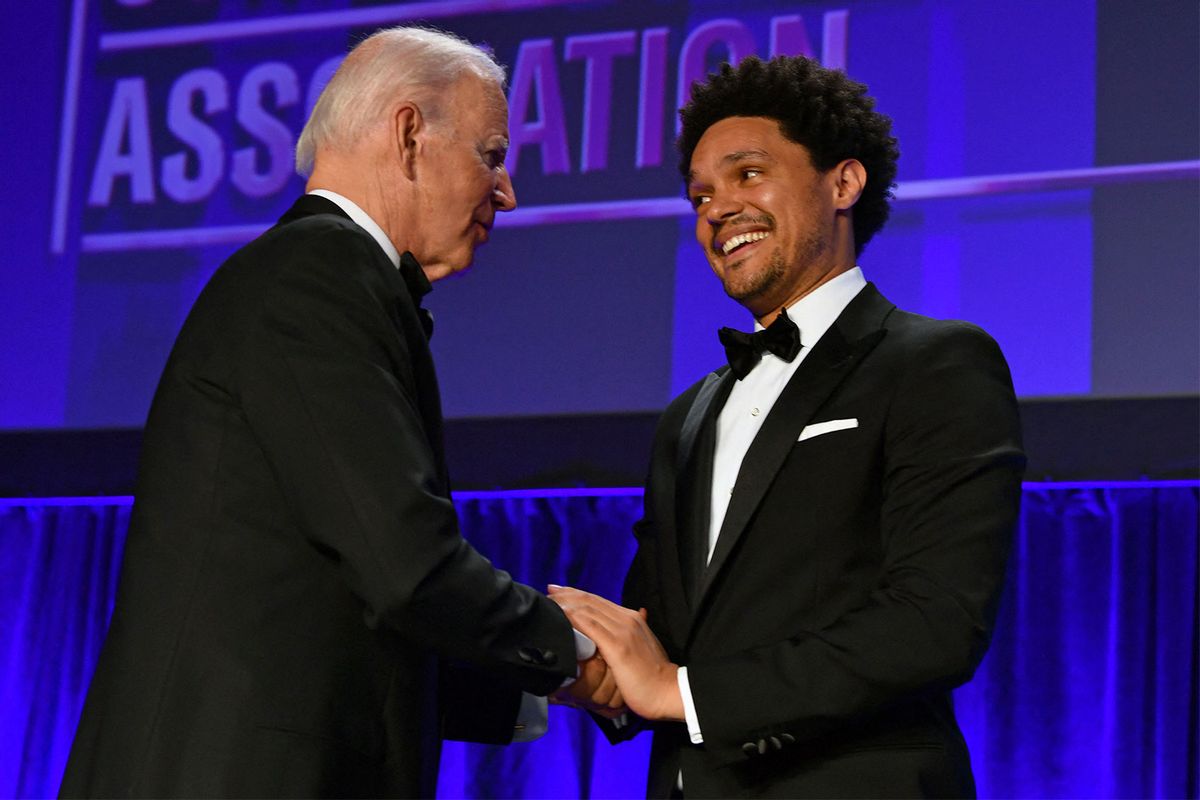 Few came out unscathed from Saturday's White House Correspondents' Dinner, which featured sets by Daily Show host Trevor Noah and President Joe Biden, both of whom struck a jocular tone while ending with more serious comments about the value of a free press.

It was the first time the event had been organized since 2019 before pandemic-era restrictions forced the previous administration to forgo the dinner. Saturday also marked the first time a sitting president has attended the event since President Obama did in 2016, according to The Washington Post.

During his remarks on Saturday, Biden took shots at himself, Fox News, and the Republican Party, first opening with a line about his historically low poll numbers.

"A special thanks to the 42 percent of you that actually applauded," Biden said after being introduced. "I'm really excited to be here tonight with the only group of Americans with a lower approval rating than I have."

Later, Biden pivoted to Fox News and the pandemic, highlighting the divide between rhetoric on the network and company policies around COVID-19.

"I know there are questions about whether we should gather here tonight, because of covid. Well, we're here to show the country that we're getting through this pandemic," Biden added. "Plus, everyone had to prove they're fully vaccinated and boosted. So if you're home watching this, and you're wondering how to do that, just contact your favorite Fox News reporter. They're all here, vaccinated and boosted. All of them."

At one point, the president poked fun at Fox News host Sean Hannity, who was reportedly in direct communication with Mark Meadows, Donald Trump's chief of staff, over what should be told to the network's viewers in the leadup to the Capitol riot.

"Fox News, I'm really sorry your preferred candidate lost the last election," Biden said. "To make it up to you, I'm happy to give my chief of staff to you all so he can tell Sean Hannity what to say every day."

The president later ended on a more serious note, applauding the press for its reporting on the pandemic and the 2020 election. "The truth is buried by lies and the lies live on as truth," he said. "What's clear, and I mean this [from] the bottom of my heart, is that you, the free press, matter more than you ever did in the last century. I really mean it. I've always believed that good journalism holds a mirror to ourselves to reflect on the good, the bad and the truth."

After Biden's set, Noah took the stage with a number of risible quips about Biden, the Democrats, the GOP, and individual members of the media.

Noah specifically took aim at Sen. Kyrsten Sinema, D-Ariz., who, despite her party affiliation, has blocked Biden's agenda over the past two years on a number of key issues.

"Whoever thought we'd see the day when a senator could be openly bisexual but a closeted Republican?" Noah joked. "That's progress."

"Trump said he won the election, but everyone was just able to look at the numbers and see that he was wrong," Noah said. "That's why Ron DeSantis is one step ahead — first you ban the math textbooks, then nobody knows how to count the votes. Boom. My man!"

Even CNN came under fire, with Noah making fun of the ex-CNN chief Jeff Zucker's resignation as well as the death of CNN+.

"The great chef José Andrés is here tonight," Noah joked. "Whenever there's a disaster anywhere in the world, chef José is there, which I guess is why he's sitting at the CNN table tonight."

Toward the end of his address, Noah stressed the unique value of a free press, challenging the media industry to make the most of the privilege.

"In America, you have the right to seek the truth and speak the truth, even if it makes people in power uncomfortable," Noah said. "Even if it makes viewers or readers uncomfortable. You understand how amazing that is? I stood here tonight and I made fun of the president of the United States and I'm going to be fine."

RELATED: Jeff Zucker out as CNN head after failing to reveal relationship with former Cuomo aid