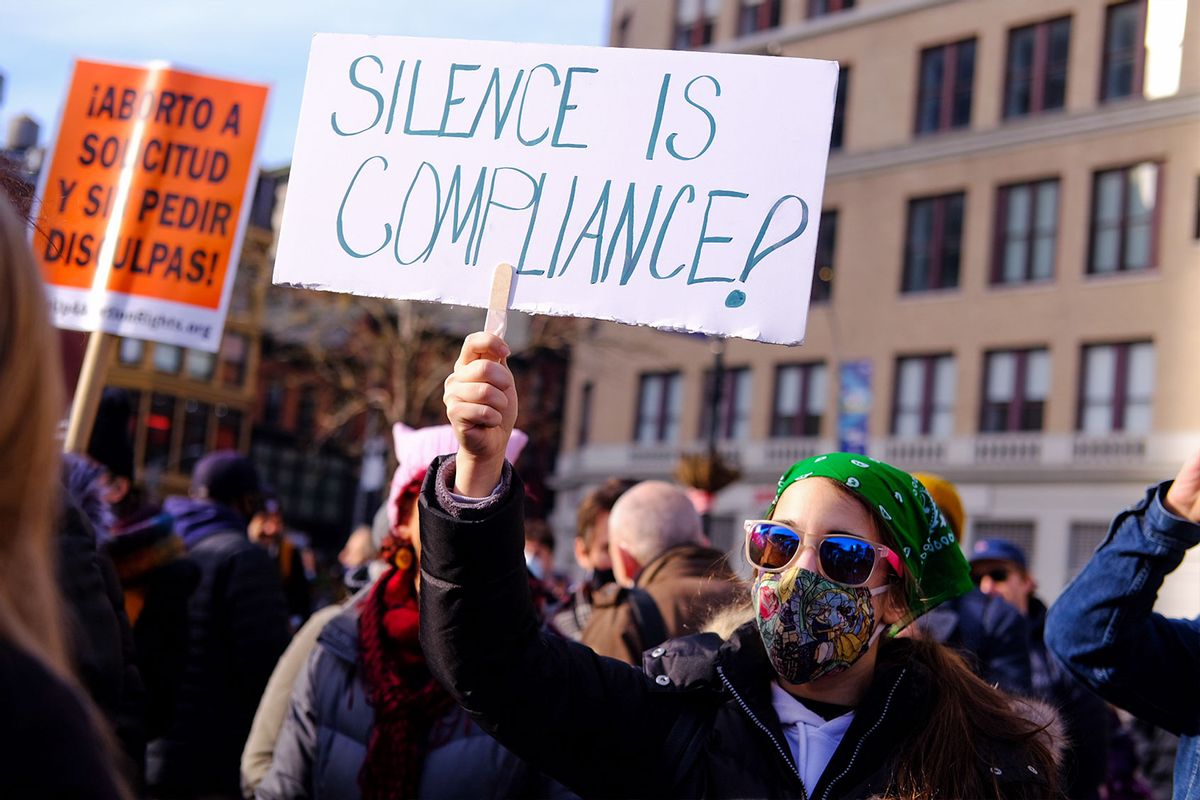 In 1995, while working as a legislative assistant for the American Civil Liberties Union (ACLU), one of us advised state ACLU affiliates how to deal with bills restricting abortion rights. It's impossible to forget a harrowing phone call received one day from an affiliate in an upper Midwest state. The state legislature was considering a parental consent bill, and the parental notification law had already wreaked havoc on young lives, as she explained, "We had a case where a young girl was raped daily by her father, starting at age five. At 13, she became pregnant. A relative decided to help her and scheduled an abortion. The father was notified, and the night before the procedure, he shot and killed her."

While pregnancy can be a joyous and miraculous event for those who freely choose it, forced pregnancy and childbirth is violence. It is sexual abuse. It is trauma. There exists no other comparable situation in which a human being (who is not incarcerated) is forced to undergo a potentially traumatic and even deadly medical event against their will. Legally mandating that a person continue an unwanted pregnancy — as the Supreme Court now appears poised to do — will destroy lives and futures. We know this because it happened prior to the Roe v. Wade in the U.S., and it happens all over the world.

In policy schools, we teach students to evaluate policies and determine their intended outcomes and unintended consequences by examining empirical evidence and data. When policies are controversial, it is even more critical to weigh the outcomes. In the case of public health policy, the data is incontrovertible: Criminalizing abortion results in irreparable harm. In fact, it actually has the opposite policy effect that anti abortion advocates say they want: It can increase abortion rates, unintended pregnancies and infant mortality.

Forced pregnancy and childbirth is violence. And it often results from violence. One in five women in the U.S. experience rape or attempted rape. One in four girls experience sexual abuse. One in four women experience intimate-partner violence during their lifetime. One in six women have been stalked. Pregnancy can increase the likelihood of partner violence. For those who are poor, Black, indigenous, a person of color, LGBTQ, an immigrant, disabled or unhoused, the likelihood of experiencing violence is even higher. Forced pregnancy and childbirth impacts the babies born as a result of it, another form of violence. Medical research shows that spacing babies is critical to their survival. Low-income women with shorter intervials between pregnancies have higher odds of precipitous labor, and infants whose birth was not spaced have higher odds of low birth weight, NICU admission and mortality. In places where abortion is completely illegal, women are often prosecuted for murder when they experience miscarriages and stillbirths, because it is nearly impossible to distinguish those events from abortion. This violence will happen regularly in the U.S. if the Supreme Court overturns Roe v. Wade.

Forced pregnancy and childbirth is sexual abuse. Both require the sexual reproductive capacity of human bodies. Being forced to provide that capacity, and to endure the physical intrusion and penetration of the body that both pregnancy and childbirth require, is nothing less than sexual abuse. In no other circumstance can the state legally force a human being to endure sexual abuse — the violation of their sexual autonomy and bodily integrity. It is particularly egregious that poor and minority communities will be disproportionately subjected to this abuse.

Forced pregnancy and childbirth are unique: In no other circumstance can the state legally force a human being to endure sexual abuse.

Forced pregnancy and childbirth is trauma. A crucial fact that is often missed in the abortion debate is that all pregnancies carry risk. Women regularly experience post-birth health and medical conditions, some of which are life-threatening, including hemorrhage, stroke and infection, among many others. Pregnancy-related mortality ratios for Black women are more than three times higher than for white women. Ten to 20 percent of women experience postpartum or perinatal depression, which can be severe and debilitating. Those with certain common conditions before or during pregnancy are at greater risk of cardiovascular disease, diabetes and stroke after giving birth. And many women experience long-term effects of pregnancy and childbirth for the rest of their lives, including pelvic organ prolapse, stress incontinence and abdominal separation.

All these medical outcomes require ongoing expensive medical care that many cannot access because health care is not a guaranteed human right in the U.S., as it is in many other countries. When the state outlaws abortion, it forces women to experience multiple compounding traumas that risk their physical and mental health, financial security and well-being.

Tamara Kay is a professor of global affairs and sociology in the Keough School of Global Affairs and College of Arts and Letters, University of Notre Dame.

Susan L. Ostermann is an assistant professor of global affairs and political science at the Keough School of Global Affairs, University of Notre Dame. The authors' opinions are their own, and do not necessarily reflect those of the university.