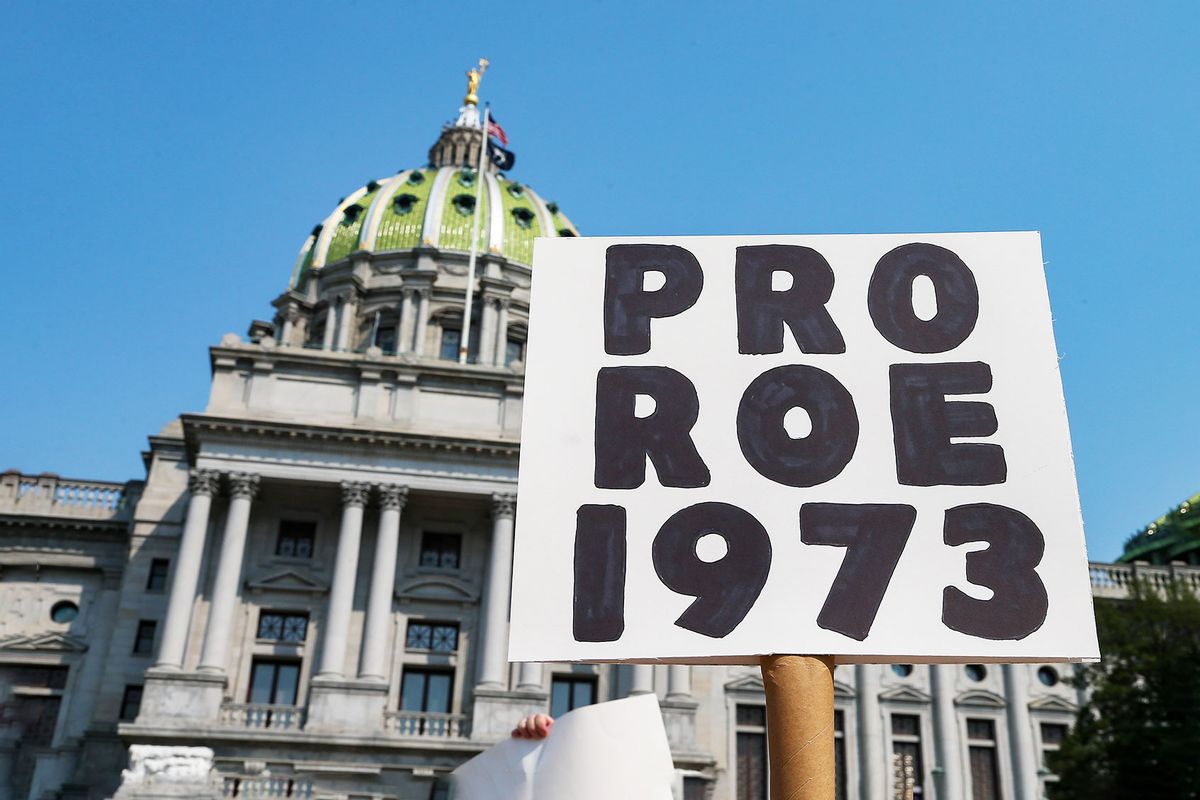 A protester holds a placard in front of the Pennsylvania State Capitol during the Rally for Reproductive Rights. (Paul Weaver/SOPA Images/LightRocket via Getty Images)
--

According to a report from the "Guardian", conservative lawmakers in so-called "red states" are already making plans to make sure women in their states won't be able to cross state lines to obtain abortions once the Supreme Court tosses out the historic Roe v Wade decision.

On Monday night, Politico released a leaked first draft ruling from Justice Samual Alito that indicates the conservative-leaning court plans to gut the privacy protections guaranteed by the 1973 ruling that forestalled the government from placing excessive government restrictions on women seeking an abortion.

According to the report, in the early draft, Alito wrote, "We hold that Roe and Casey must be overruled," before concluding, "The Constitution does not prohibit the citizens of each State from regulating or prohibiting abortion. Roe and Casey arrogated that authority. We now overrule those decisions and return that authority to the people and their elected representatives."

With that in mind, the Guardian's Melody Schreiber writes that efforts are afoot to not only ban abortions outright within state lines but also to interfere with a woman's right to choose if she seeks help across state lines.

"Lawmakers in Missouri weighed legislation early this year that would allow individuals to sue anyone helping a patient cross state lines for an abortion. The law was ultimately blocked in the state's legislature, but experts expect such legislation to gain more support if Roe is weakened or overturned," Schreiber wrote.

According to David Cohen, a professor at Drexel University's Kline School of Law, expect states to go to war with each other after the court makes its ruling official.

"I think states are not going to rest with just saying 'there won't be abortions in our state.' I think they're going to want to ban abortion for their citizens as much as they can, which would mean stopping them from traveling," Cohen explained, amplifying an argument he co-authored on what to expect after Roe v Wade is demolished.

"We're going to see state-against-state battles that are really going to divide this country even deeper on this issue," he continued, adding he could see the court siding with the even more restrictive laws.

"The Supreme Court does not have well-developed case law regarding extraterritorial application of state law," he explained before adding that a court willing to dismantle the 50-year-old ruling is capable of anything.

"States are also likely to crack down on other efforts to access care. In Texas, a law passed last year made it illegal to ship medication for self-managed abortion, including across state lines – another potential template for copycat legislation," Schreiber reported. "Since the US Food and Drug Administration (FDA) announced last year that it would continue its pandemic-era policy to allow medication abortion, also known as the 'abortion pill'' to be prescribed via telemedicine, the drugs have become a greater target from anti-abortion advocates. Medication abortion now accounts for the majority of abortions in the US."

However, Cohen warned, "Pills are going to be a major part of how people continue to get abortions after the Supreme Court rules, so I think that we'll see states trying to ban pills in all sorts of different ways."