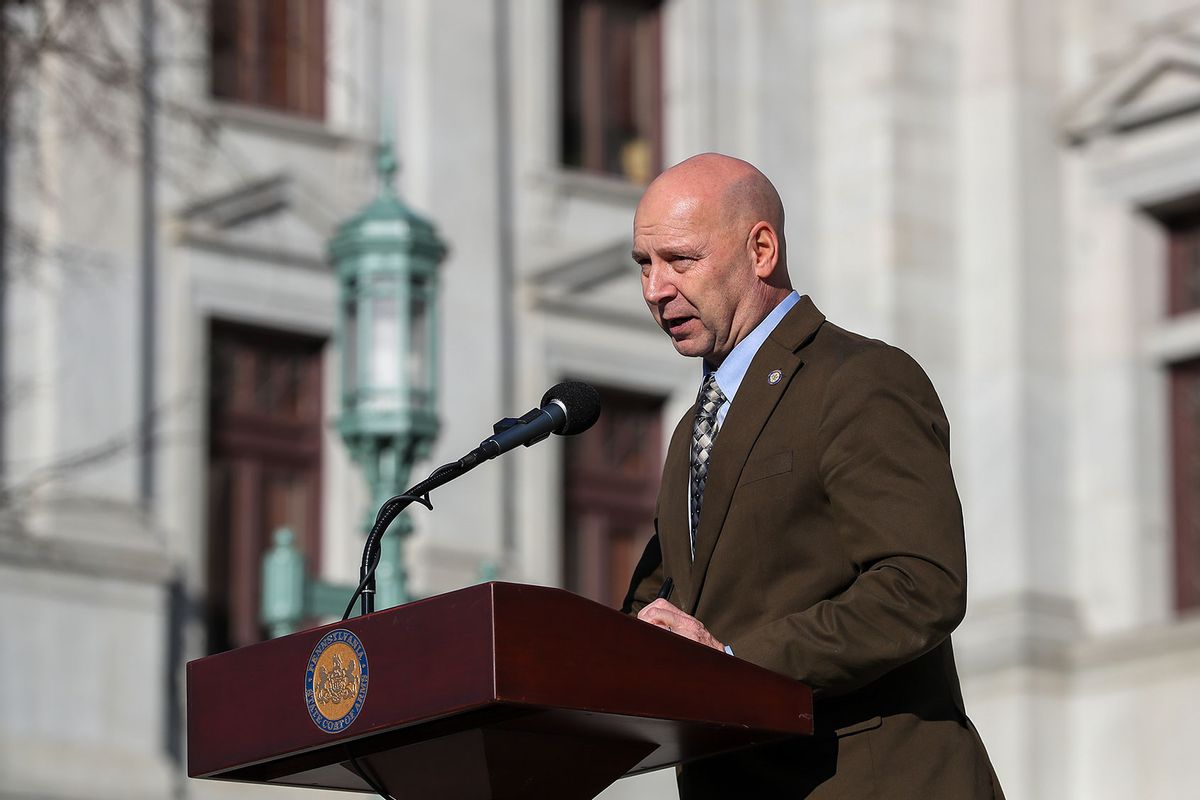 All four GOP candidates in the Pennsylvania gubernatorial race have said they would ban abortion in the Keystone State, with two claiming that they'd make no exceptions for rape, incest, or medical emergencies that risk the life of a pregnant person.

In a questionnaire made by the Pro-Life Coalition of Pennsylvania, candidates Bill McSwain, Lou Barletta reportedly indicated that they support a total ban on abortion, except in the case of rape, incest, and medical emergencies, according to Oregon Public Broadcasting. However, candidates Doug Mastriano and Dave White vowed to make no such exceptions.

On Saturday, White, a devout Catholic, told the Associated Press that his parents taught him the "blessing of every child that comes into this world." And during a debate weeks ago, Mastriano, the Pennsylvania state senator leading the primary, called abortion his "​​No. 1 issue," saying that he would prohibit the procedure at any point after conception.

RELATED: Republicans aren't even bothering to lie about it anymore. They are now coming for birth control

At least eleven states – including Alabama, Arkansas and Texas – have passed abortion bans that make no exceptions for rape, incest, but do allow for medical emergencies, according to The Guardian. For decades, as The Atlantic reported, such exceptions were regularly tucked in anti-abortion legislation, which the vast majority of Americans support. However, the recent Republican crackdown on abortion rights has been much more ambitious, with some calling for a nationwide ban on abortion.

Last week, Politico reported that the Supreme Court is currently on track to overturn Roe v. Wade, the landmark 1973 ruling enshrining America's constitutional right to abortion. According to a leaked draft majority opinion, the court has already informally voted to reverse the decision.

At present, abortion is legal in Pennsylvania for up to 24 weeks into pregnancy. Pennsylvania Gov. Tom Wolf has already torpedoed three GOP-led abortion restrictions and has promised to veto any similar legislation in the future.

"A decision by the Supreme Court on Roe v. Wade will not have an immediate impact on Pennsylvania or its current laws," he said in a statement last week. "Should this opinion become final, abortion access in Pennsylvania will remain legal and safe as long as I am governor. I will continue to veto any legislation that threatens access to abortion and women's health care.

According to Axios, Pennsylvania's GOP caucus is backing a constitutional amendment that would challenge the notion that abortion is enshrined by the state's constitution. That amendment, which might be on the ballot as early as May 2023, would be immune from Wolf's veto power.

Correction: A previous version of this story incorrectly claimed that 11 states have already enacted abortion bans without medical exceptions.