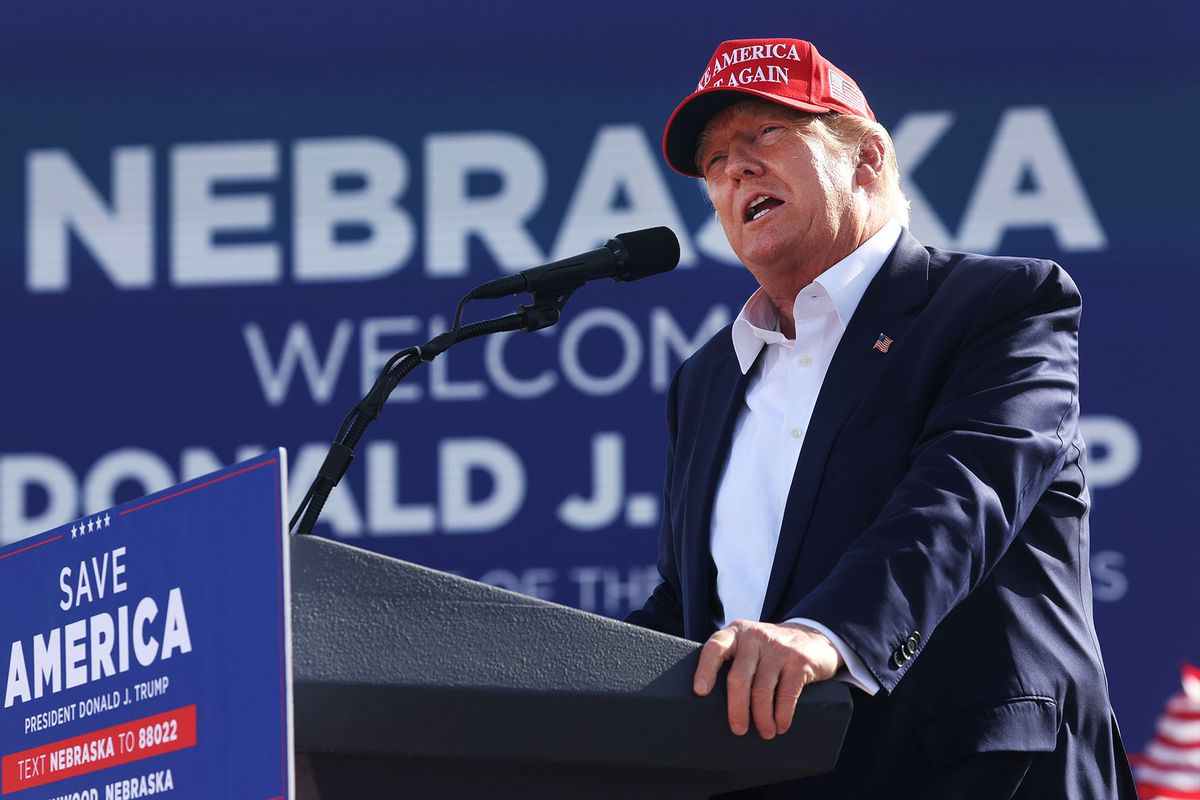 Former President Donald Trump speaks to supporters during a rally at the I-80 Speedway on May 01, 2022 in Greenwood, Nebraska. Trump supported Charles Herbster in the Nebraska gubernatorial race. (Scott Olson/Getty Images)
--

Former President Donald Trump's endorsement of "Hillbilly Elegy" author J.D. Vance in Ohio's 2022 GOP U.S. Senate primary is being cited by countless reporters as a prime example of the influence Trump still has with the GOP base. Vance went from trailing in the polls before Trump's endorsement to defeating former Ohio State Treasurer Josh Mandel and others in the primary; now, Vance is going up against a well-known Democrat, Rep. Tim Ryan, in the general election.

But Vance's victory in Ohio doesn't automatically mean that a candidate Trump endorses is going to win a Republican primary. Politico's David Siders, reporting on the results of the GOP gubernatorial primary election held in Nebraska on Tuesday, May 10, describes Trump's endorsement of the scandal-plagued Charles Herbster as an embarrassing "train wreck."

"If Donald Trump looked like a kingmaker after his endorsement put J.D. Vance over the top in Ohio's Senate primary last week," Siders writes, "he was downright middling on Tuesday. Trump's candidate won a closely-watched House race in West Virginia, but Nebraska was a train wreck for the former president."

The Trump-backed candidate who won in West Virginia is far-right Alex Mooney, who went up against U.S. Rep. David McKinley in a GOP congressional primary. McKinley was endorsed by West Virginia Gov. Jim Justice, but Mooney won.

Although Herbster was accused of sexual assault by eight different women, Trump considered him the most MAGA of the Nebraska Republican gubernatorial hopefuls — who also included hog farmer Jim Pillen, the winner, and Nebraska State Sen. Brett Lindstrom — and continued to support him aggressively. Conservative Pete Ricketts, Nebraska's term-limited Republican governor and co-chairman of the Republican Governors Association, slammed Herbster as unfit for office and urged Trump not to campaign for him.

"Trumpworld was bracing to take some hits this month, but they weren't planning on it coming so soon — or looking this ugly," Siders explains. "Charles Herbster, Trump's endorsed candidate for Nebraska governor, was running for an open seat, not challenging an entrenched incumbent, as is the case for some of Trump's favored candidates competing in primaries later this month."

Siders continues, "Candidates don't get any more MAGA than Herbster, a Trump megadonor who all but stapled himself to the former president during the primary. Trump repaid the favor by traveling to Nebraska last week to campaign for his longtime ally, even after eight women accused Herbster of sexual assault. It was a risk that looks foolish now. Herbster lost to Jim Pillen, a more establishment-oriented Republican, in the primary."

Siders doesn't mince words in his piece, emphasizing that Trump clearly bet on a losing horse when he campaigned for Herbster despite all the sexual assault allegations he was facing.

"For Trump, the fact that it was Pillen who prevailed will come as salt in the wound," Siders writes. "A pork producer and member of the University of Nebraska Board of Regents, Pillen had the backing of the state's term-limited governor, Pete Ricketts, who lobbied Trump last year to stay out of the primary. Trump didn't listen, and instead, Tuesday served as a reminder that as powerful as Trump is, there are other political machines — in Nebraska's case, Ricketts' — that are willing to feud with him. In some situations, they can win. Ricketts and his father, billionaire Joe Ricketts, contributed heavily to anti-Herbster efforts in the state."