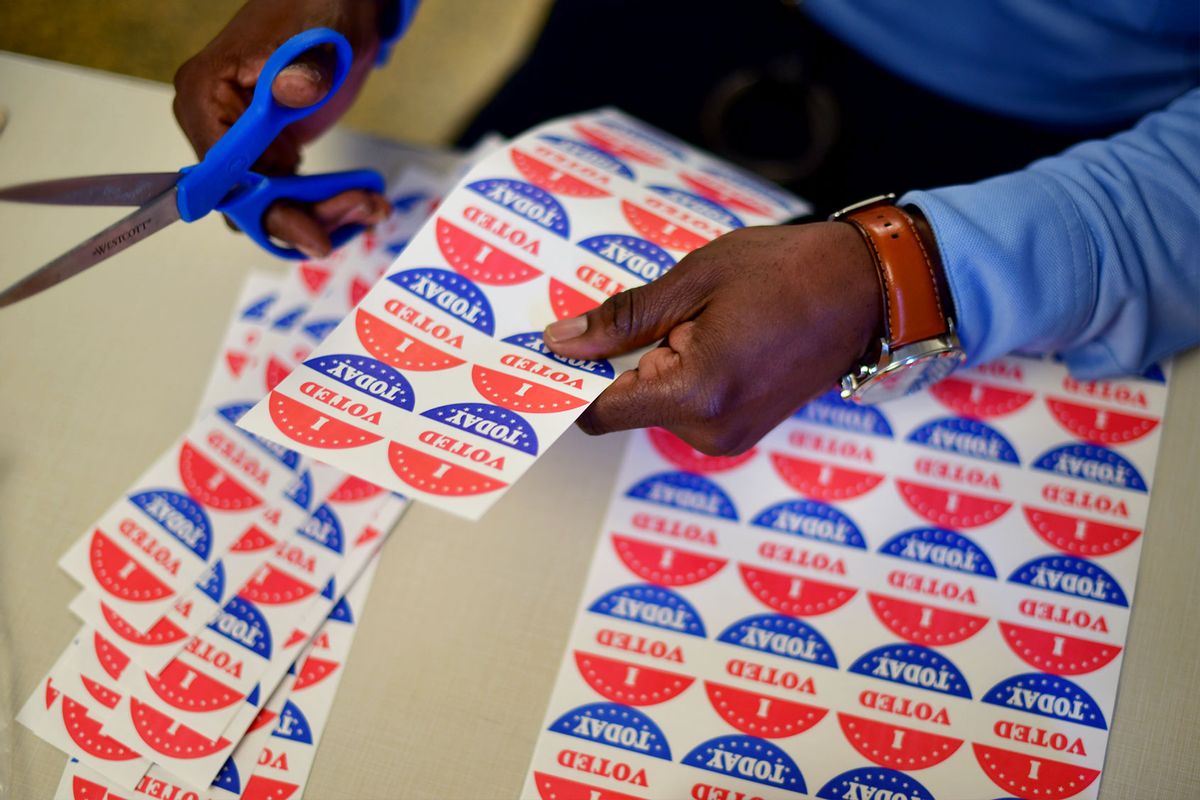 A volunteer cuts out "I VOTED TODAY" stickers for voters queueing outside of a satellite polling station on October 27, 2020 in Philadelphia, Pennsylvania. (Mark Makela/Getty Images)
--

A pair of Pennsylvania GOP staffers were fired after allegedly orchestrating a potential "ballot harvesting" scheme, according to The Philadelphia Inquirer.

C.J. Parker, 24, and Shamus O'Donnell, 27, and were both sacked after allegedly sending dozens of ballots to a P.O. box associated with a Republican political action committee known as the Republican Registration Coalition. The PAC's chairman, Billy Lanzilotti, told the Inquirer that he had intended to hand deliver the ballots to voters himself.

"I didn't do anything that to my understanding was against the law," Lanzilotti told the outlet, arguing that he was trying to help voters. "There's been a number of problems with the post office lately," he added. "Checks are being stolen out of the mail. They like it this way because I'm someone they trust."

Ballot harvesting, which involves having a third-party collect or distribute ballots on behalf of voters, is strictly banned in Pennsylvania except to assist voters with disabilities. State law mandates that voters fill out and deliver their ballots themselves unless they've provided authorization for someone else to perform both tasks for them.

According to the Inquirer, only one of the voters whose ballots were collected by the Republican Registration Coalition had actually received their ballot. Many of the voters did not reportedly remember signing off on having their ballots collected or distributed by the PAC. The Inquirer also reported that there is no indication that Lanzilotti attempted to tamper with the ballots in question.

O'Donnell's attorney, Matt Wolfe, said that his client had "no knowledge of the mail ballot applications and what Billy Lanzilotti was doing," noting that O'Donnell simply served as the PAC's treasurer.

Republican state Rep. Seth Grove, chairman of the House State Government Committee, said that the incident "is nothing more than ballot harvesting."

"If Gov. Tom Wolf had not vetoed the Voting Rights Protection Act without reading it, this alleged ballot harvesting scheme would not have happened," he added.

The incident is just the latest in a series of GOP-related voting scandals in recent months. Back in April, two Republican voters from Florida's famed retirement community, The Villages, admitted to filing ballots in two different states.

Meanwhile, Mark Meadows, Donald Trump's former chief of staff, is under a state investigation for alleged voter fraud in North Carolina. Meadows reportedly registered to vote in what has been called a "dive trailer" in rural North Carolina, but there's no indication that he's spent a single night there, The New Yorker reported.