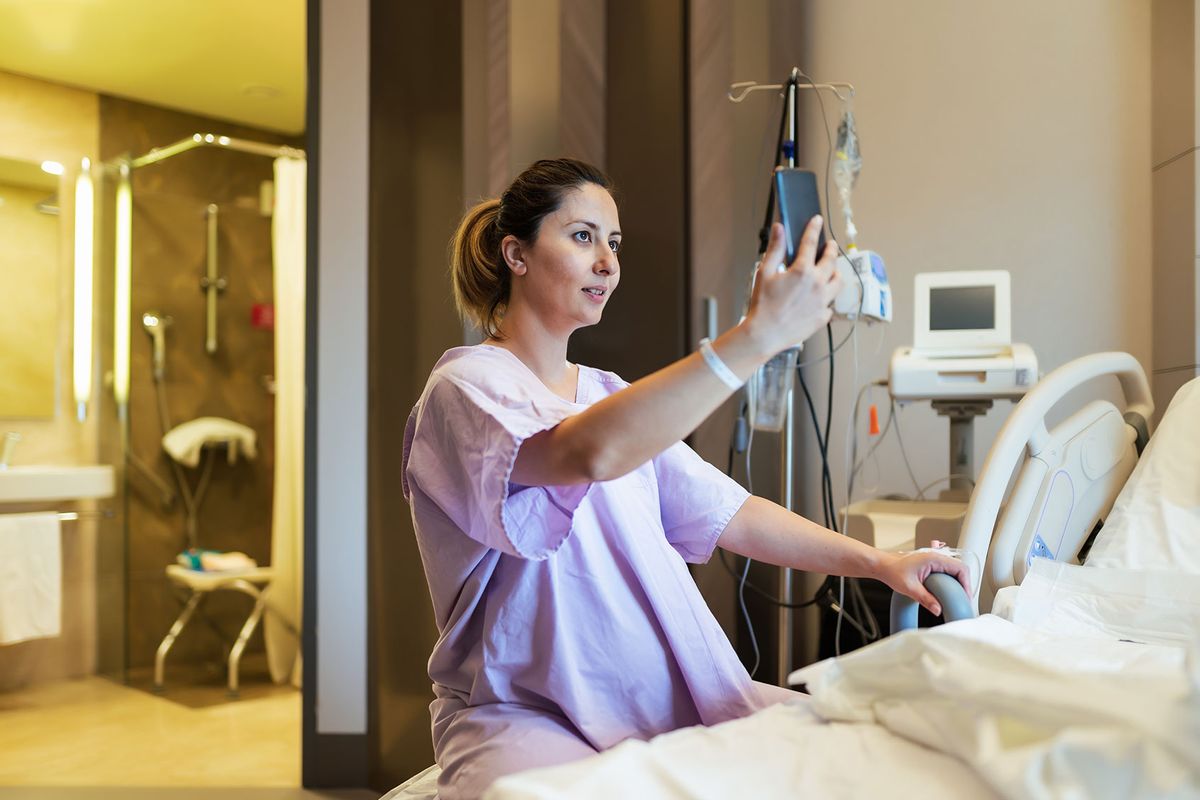 For Elizabeth Cawein's first pregnancy, she hired a birth doula — someone who could advocate for her during labor, educate her on birth beforehand, and support her postpartum in recovery. Sadly, Cawein's son died during delivery in July 2018. The doula she hired was out of town when she went into labor, but she wasn't upset about her absence. Instead, it made her realize that maybe she didn't want a doula in the delivery room after all.

"My husband and I ultimately were alone together in the delivery room for that experience," Cawein told Salon. "And because it was such a difficult and emotional thing to go through, it really sort of created this feeling that this was really in an even more sacred space that we just wanted to be alone."

When Cawein got pregnant again with her daughter, she thought deeply about if she wanted a doula, but felt conflicted. Her previous experience left her with the sense that she just wanted her and her husband in the delivery room this time.

"It was a little strange to come into the second pregnancy feeling like, 'I don't want anyone else in the delivery room except us,'" Cawein said. "But I thought, wouldn't it be really great to have somebody who has a lot of knowledge and has that training, who can talk to us and answer questions about birth, the birth experience, but also support on postpartum."

Pregnant women who had support from a birth doula were less likely to have pain medications or cesarean births.

While talking to a friend about her dilemma, she learned about the concept of a "virtual doula" — or, as some might refer to them, as a "Zoom doula."

"I never would have thought that that was a thing," Cawein said. "I had no idea." Shortly thereafter, she hired a virtual doula for her second pregnancy — one who never physically set foot in the room where she gave birth.

There are many proven benefits to having a birth doula. According to a Cochrane Review analysis of 26 studies with data from 17 countries, pregnant women who had support from a birth doula were less likely to have pain medications or cesarean births. Indeed, many studies suggest that women with birth doulas are more likely to have a more positive birth experience. The positive effects of doula care have been found to be more pronounced for women with lower socioeconomic status, who gave birth without a companion, or who had experienced a cultural or language barrier.

But usually the main part of a doula's job is the doula physically being there to assist with comfort techniques and advocate for the pregnant woman during labor and delivery. How can that happen over Zoom? The pandemic limited visitors in hospital delivery rooms, making it difficult for doulas to doula. Instead, many had to rely on virtually supporting their clients — via Facetime, video conferencing apps like Zoom, or even text. While doulas are mostly allowed back in delivery rooms now, many are finding that some of their clients still prefer to have a virtual-only doula for a variety of reasons.

Brittany Carmona-Holt, who is a full spec­trum birth doula and author of "Tarot for Pregnancy," offers virtual-only sessions in addition to in-person ones. When Carmona-Holt has a virtual client, the lead-up often looks similar to someone who wants her attending the delivery in-person, too. Carmona-Holt offers monthly virtual prenatal sessions which cover movement, nutrition, comfort techniques, education on birth, and discussions around potential birth interventions — depending on where the client is in pregnancy. Then, when the virtual client goes into labor, Carmona-Holt is "on call," albeit in a virtual stance, to answer questions and advocate for her client.

"[For] the majority of people who have utilized my [virtual doula] services in that way — it wasn't necessarily the pandemic that was the barrier, it was our distance," Carmona-Holt said.

"I have yet to have a client who actually wants me, live on Zoom, like while they're laboring, which I understand," Carmona-Holt said. "So it's more like I'm on call, and they're texting me updates . . . that's pretty similar to when you're there in person." Usually, Carmona-Holt says, the care provider has a plan of action, and if the person giving birth doesn't like where things are going, she can ask for Carmona-Holt's help in communicating her needs. This is similar regardless of whether one is using a virtual or physically present doula. "It's the same as how it would be in person, where I'd say 'Can we have five minutes to discuss this?'" Carmona-Holt says.

Carmona-Holt said offering virtual services has been great for people who want to work with her, but live far away.

"I think virtual doula services are here to stay, because the majority of people who have utilized my services in that way — it wasn't necessarily the pandemic that was the barrier, it was our distance," Carmona-Holt said. "And they liked my way of doing things and wanted that type of support from me, specifically, but they weren't local."

Kim Abog, a birth doula and naturopathic doctor in Ontario, said she offered virtual services before the pandemic. But the pandemic increased the need for it.

"The transition to providing virtual services pregnancy-wise was something that just was already budding even when I first started," Abog said.

When Abog has a virtual client, she sets up a month for her to be "on-call" virtually for them.

"We set up on a messaging platform, usually probably WhatsApp or whatever they prefer that's relatively more secure," Abog explained. "And then we just have an ongoing basis of communication, and then that would also provide us an opportunity to reassess and see if there is a need for me to come over to their houses or to their preferred setting."

Abog said she certainly has clients who feel more confident by themselves giving birth, and prefer the virtual service over the in-person one.

"There are a lot more people who still prefer having the person waiting in their proximity, so that they can get that support with those adjustments," Abog said. "But if there are any hiccups along the way they would know what to do, and that's still can be communicated virtually."

Cawein said to anyone who is on the fence about hiring a virtual doula that the information you learn beforehand is very empowering and gives pregnant people the opportunity to advocate for themselves.

"There's so much information that you need to have and, frankly, so much of advocating for yourself is understanding what your options are," Cawein said. "And that has to happen before you're ever in the delivery room, and I think that's the kind of support that can absolutely be provided virtually, and there's no downgrade to that."

Read more on pregnancy and doulas: