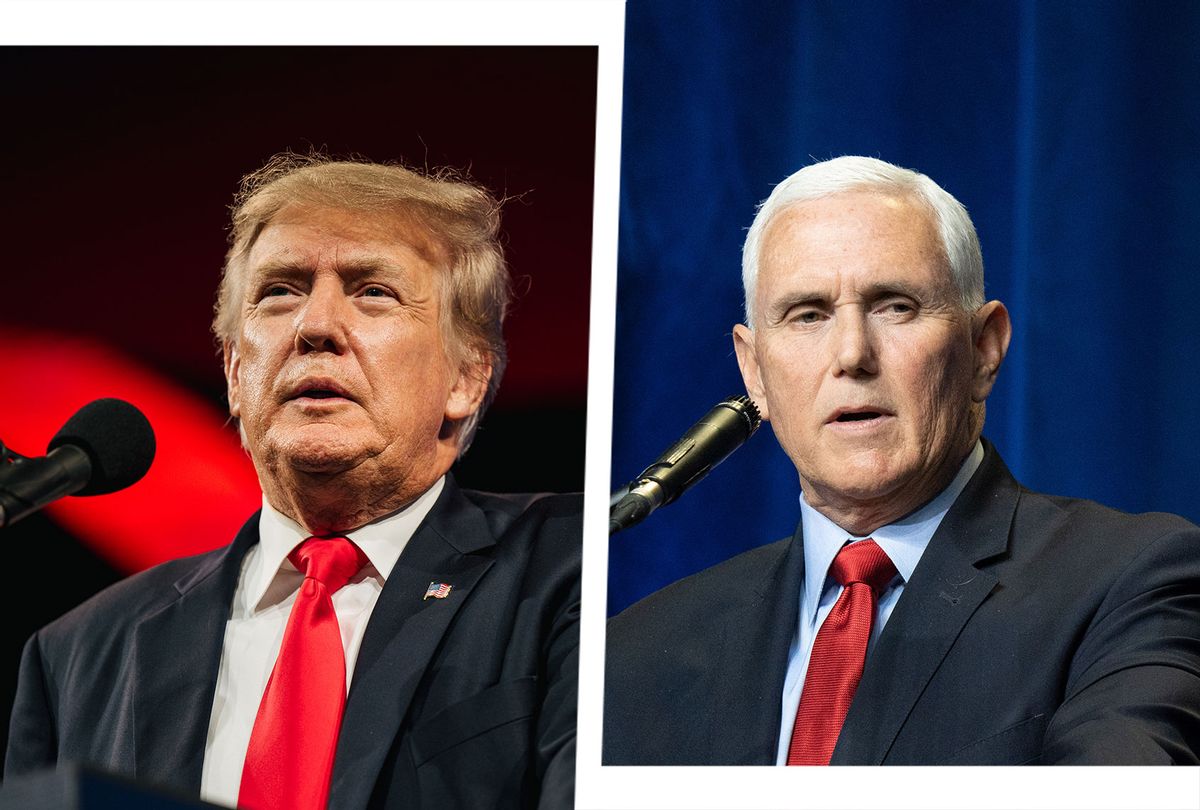 Donald Trump's spokesperson, Taylor Budowich, lashed out at former Vice President Mike Pence for backing a number of non-MAGA Republicans in this year's primaries ahead of a potential 2024 presidential bid, calling him "desperate to chase his lost relevance."

"Mike Pence was set to lose a governor's race in 2016 before he was plucked up and his political career was salvaged," Budowich told The New York Times. "Now, desperate to chase his lost relevance, Pence is parachuting into races, hoping someone is paying attention. The reality is, President Trump is already 82-3 with his endorsements, and there's nothing stopping him from saving America in 2022 and beyond."

RELATED: Pence biographer: He "imagines he's one day closer" to becoming president because it's God's plan

Budowich's remarks come amid a growing rift between Trump and Pence, who the former president castigated back in January 2021 for not going along with a plan to overturn his 2020 election loss.

In recent months, that rift has grown wider in light of the former vice president's support of Georgia Gov. Brian Kemp, who likewise resisted Trump's pressure to reverse the last presidential election. Kemp is currently facing a gubernatorial primary challenge from the former Sen. David Perdue, R-Ga., who the former president recruited into the race.

Earlier this month, outlets reported that Pence would campaign with Kemp, a joint effort that's set to officially commence on Monday, according to the Times.

"Brian Kemp is one of the most successful conservative governors in America," Pence said back in May. "Brian Kemp is my friend, a man dedicated to faith, family and the people of Georgia. I am proud to offer my full support for four more years of Brian Kemp as governor of the great state of Georgia!"

Pence's name has also been floated in the national conversation about potential presidential contenders in 2024. On Monday, the former vice president left open the door to jumping into the race even if Trump runs as well.

"We'll go where we're called," Pence said, suggesting that he would act on God's will. "That's the way Karen and I have always approached these things."

Pence also told the Times that people have expressed gratitude over his unwillingness to overturn the 2020 election.

"I have been very moved traveling around the country how much people have made a point to express appreciation, it has been very humbling to me," he said, adding that he spent "five years in a foxhole" while working for the Trump administration.

Most Americans believe that the former vice president had no right to alter the results of the election, according to a poll from February.