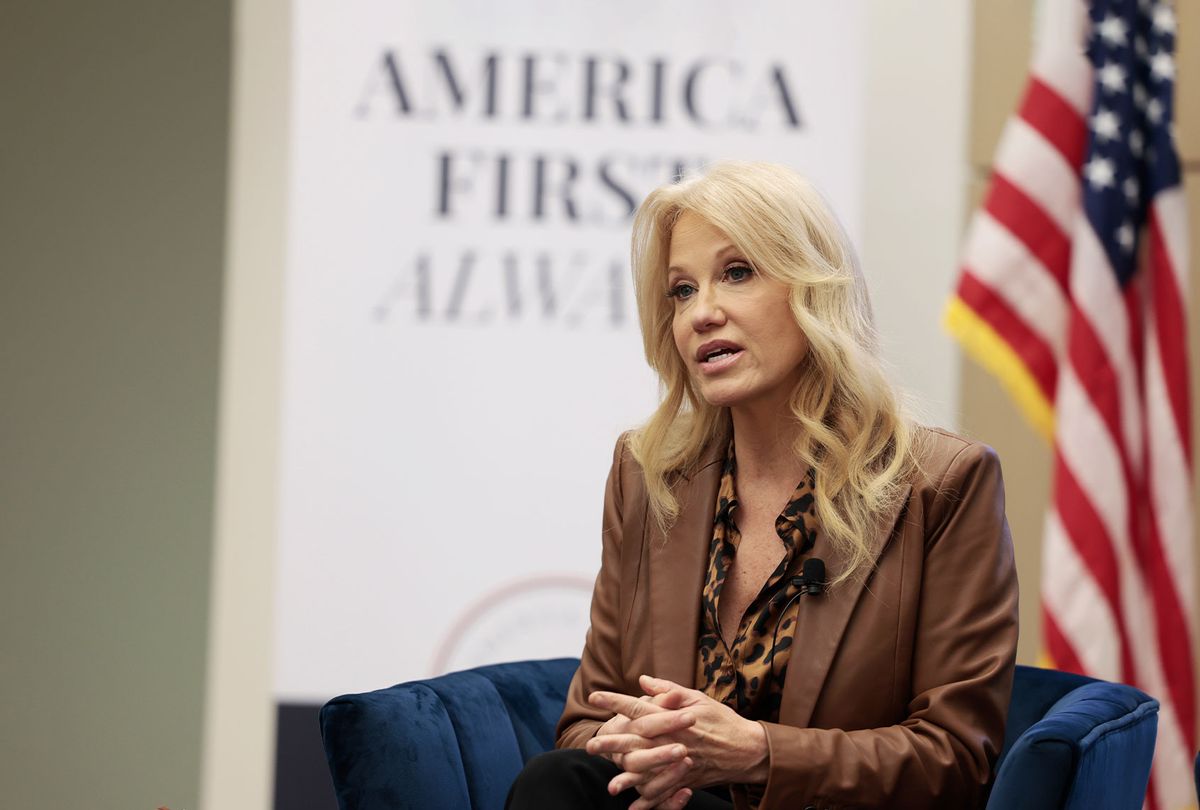 Donald Trump's spokesperson, Liz Harrington, on Monday denied that the former president ever considered dropping out of the 2016 presidential race after the Access Hollywood tape was leaked, calling the accusation detailed in a forthcoming book by White House counselor Kellyanne Conway "totally false."

Conway detailed an informal meeting she had with Trump outside of an elevator in Trump Tower just a day after the tapes were leaked to The Washington Post, according to an excerpt from her upcoming book "Here's the Deal" that was published by The Daily Beast's Zachary Petrizzo.

Concerned about reports that the Republicans Party might attempt to push him out of the race, Trump asked Conway, "Should I get out [of the race]?"

RELATED: Spin class with Kellyanne Conway: How to BS your way out of anything

"You actually can't," she reportedly told him, "unless you want to forfeit and throw the whole damn thing to Hillary."

RELATED: How Kellyanne Conway spun Trump's past to work for a right-wing evangelical audience

Conway also alleged that she tore into her former boss over his remarks, calling them "disgusting" and "reprehensible" to his face.

At the time, several dozen Republicans called on Trump to bow out of the race over the tape, including former Utah Gov. Jon Huntsman Jr., Sen. Dan Sullivan, R-Alaska, and Sen. Cory Gardner, R-Colo. Likewise, numerous Republicans who endorsed the former president had also rescinded their imprimaturs over the tape.

But while Conway might've found Trump's taped remarks despicable, she continued to defend the president publicly, insisting that people "should stop using" the term "sexual assault" to describe what Trump had alluded to in the tapes, as the Beast noted.

Asked why people should stop using the term, Conway told CNN's Dana Bash, "Because I know him better, and I know better."

In her tell-all, Conway reportedly goes easy on Trump for the most part, instead unloading on numerous former colleagues from her time in the administration.

Conway reportedly describes Jared Kushner, Donald Trump's son-in-law who served as one of Trump's senior advisors, as "shrewd and calculating," according to HuffPost.

"There was no subject he considered beyond his expertise. Criminal justice reform. Middle East peace. The southern and northern borders. Veterans and opioids. Big Tech and small business," Conway wrote, according to the excerpt. "If Martian attacks had come across the radar, he would have happily added them to his ever-bulging portfolio. He'd have made sure you knew he'd exiled the Martians to Uranus and insisted he did not care who got credit for it. He misread the Constitution in one crucial respect, thinking that all power not given to the federal government was reserved to him."

Her relationship with Kushner reportedly went awry after he accused her of leaking sensitive information to the media.

Conway also detailed the rift between her and her husband, George, a conservative political activist who repeatedly castigated Trump online his actions and rhetoric.

"Like everything George did during this time," Conway explained, "I found out about it after it happened or as it was happening. It was sneaky, almost sinister. Why not own it, share it, sneer in my face with a copy of tomorrow's Washington Post op-ed or next week's Lincoln Project ad?"

"I had two men in my life," she added. "One was my husband. One was my boss, who happened to be president of the United States. One of those men was defending me. And it wasn't George Conway. It was Donald Trump."

During the schism, Kellyanne Conway was reportedly given advice by Trump's daughter, Ivanka, who, according to Conway's book, told her to get couples therapy.

At one point, Ivanka reportedly handed Conway a Post-It note with the names and contact information of two couple therapists in the area.

"I noticed she had avoided putting that in a text or an email. I appreciated the information and her thoughtfulness and wanted to pursue it," Conway recalled, according to The Washington Post. "After I showed George the names, he rejected one and said a halfhearted 'okay' to the other while looking at his phone. We never went."