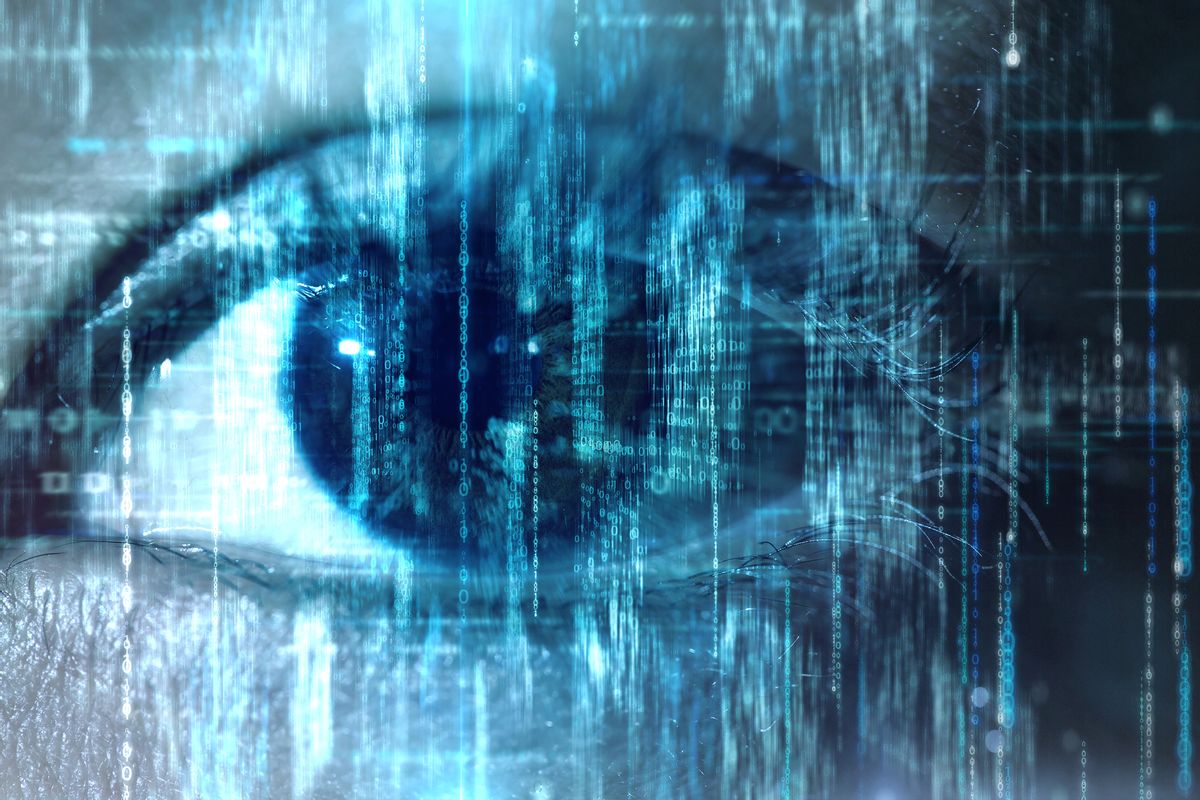 Imagine, several months from now, a pregnant woman in Texas traveling to New York to obtain an abortion. When she's about to fly back, a friend phones to warn her there's an arrest warrant waiting for her, because police in her home state used a "keyword warrant" to monitor everyone in their area who'd searched a particular term online — say, "abortion clinics in New York" — and then obtained a "geofence warrant" to track her to a Planned Parenthood facility in Manhattan. The woman becomes part of a population the U.S. hasn't seen in recent history: an internally-displaced person, unable to travel home under threat of arrest and prosecution.

Or imagine a woman in the Deep South, who in her last weeks of pregnancy, delivers a stillborn fetus at home, and, when she's taken to the hospital, encounters a nurse who suspects she'd tried to end the pregnancy herself and calls the police. When prosecutors take on the case, they obtain not just her medical records — evidence of the outcome — but her online search history as well: what they cast as evidence of "intent." Thanks to information handed over by internet providers — that the woman once searched for information about abortion medication and miscarriages — she is charged with second-degree murder, and faces 20 years to life in prison if convicted.

Computers and smartphones of anyone who is seeking an abortion — or who even suffers a miscarriage — could become evidence for police, prosecutors and bounty-hunters.

"[R]epealing a half century of reproductive rights won't transport Americans back to 1973," Cahn and his co-author on the report, Eleni Manis, write. Rather, "it will take us to a far darker future, one where antiquated abortion laws are enforced with cutting edge technology." What they envision is that the computers and smartphones of anyone who's pregnant and seeking an abortion — or who suffers a miscarriage, ectopic pregnancy or stillbirth — could be turned into repositories of evidence for police, prosecutors and even individual bounty-hunters hoping to collect a cash reward for proving someone has had an illegal abortion.

For years, pregnant patients have been subjected to a wide array of surveillance through both routine and novel means by government, corporate and private entities. Pregnant patients at hospitals face "suspicionless" drug testing when they go for prenatal checkups while patients of clinics that offer abortion services may encounter anti-abortion activists who photograph them and license plates. These days, they also face the prospect of anti-abortion geofencing: when activists pair cell phone location data with commercial advertising databanks to text them anti-abortion messages while they're sitting in abortion clinic waiting rooms. If they seek out or stumble upon one of the anti-abortion pseudo-clinics known as crisis pregnancy centers, in person or online, chances are anything they say could be added to the massive databases some CPC networks maintain.

Outside of such medical (or "medical") settings, commercial retailers and big tech companies have already fine-tuned their predictive capabilities so well that they can figure out an internet user is pregnant before they've even told their family. And while the goal of that sophisticated technology is financial — to target expectant parents just when they're about to start spending a lot of money — Cahn and Manis warn that "such commercial lists now will become evidence for those individuals whose pregnancies don't come to term."

There's already precedent for that. As civil rights attorney Cynthia Conti-Cook wrote in a 2020 article in the University of Baltimore Law Review, "Digital evidence fills a gap for prosecutors keen on prosecuting women for their pregnancy outcomes. When medical theories fail to explain why some outcomes happen, prosecutors can now sift through an accused person's most personal thoughts, feelings, movements and medically-related purchases during their pregnancy, even if there is little evidence supporting the conclusion that their conduct caused the pregnancy to end."

But the re-criminalization of abortion, say Cahn and Manis, will lead to even wider use of digital technologies to prosecute both abortion seekers and those who help them.

Some of the technology is familiar: obtaining people's search histories, shopping records, emails, chats or texts to prove they were discussing or seeking information about abortion, or even just that they were pregnant. "When purchasers pay with a credit card, an online account, or with an in-store loyalty card," the report notes, "everyday purchases — medication, pregnancy tests, prenatal vitamins, menstrual products — can become circumstantial evidence."

Others are less well-known. Law enforcement can use "keyword warrants" that would "cast digital dragnets, identifying large numbers of potential abortion seekers" by requiring technology companies to turn over information about anyone in a geographic area who has searched online for particular terms. They can also obtain "geofence warrants" that require those same companies to give information about all people who were in a particular place at a particular time. Both types of warrants have already been used in other contexts.

"Geofence warrants were first introduced in 2018 and since then have expanded so dramatically that they are now the majority of all warrants that Google receives in the U.S.," said Cahn. A 2021 advocacy campaign by a coalition of civil rights groups, including S.T.O.P., compelled Google to release information that shows that this type of inquiry accounted for more than 10,000 warrants the company responded to in 2020.

To date, keyword warrants are less common, but Cahn says they were used in one case where police demanded that Google identify everyone who had searched for a particular address, using that information as part of their investigation.

Broadly speaking, these types of warrants, as well as technology like facial recognition software, says Cahn, have been justified as a necessity for addressing threats like terrorism. But their application has not been neutral. "We've found that facial recognition was used more to target Black Lives Matter protesters than to target those responsible for the insurrection on Jan. 6," said Cahn. "There's profound discrimination in how these tools are deployed."

What's more, Cahn said, geofence warrants simply aren't effective for most police work — they're good at casting "broad digital dragnets" but bad at identifying whether someone actually is a likely suspect. However, he said, they could easily prove to be a "terrifying tool" that enable "authoritarian efforts to target health care, to target protest, to target houses of worship. It's very easy to see the potential for abuse."

In light of that threat, S.T.O.P.'s report calls for a number of measures to address these issues, primarily in "rights-protective" states unlikely to outlaw abortion. Some states offer limited protections already. Massachusetts, for instance, bans geofencing near abortion clinics, but is the only state in the country to have done so. Illinois prohibits the sharing of some biometric data, although data related to abortion is not yet included in its provisions.

But more, the report holds, is needed. First, from companies like Google or Apple, which may voice public support for abortion rights but nonetheless could be key to undermining those rights through their information collection and warehousing practices.

"If a company doesn't have individualized locations in a database that can be searched by a geofence, one can get all the warrants they want and you're not going to give over any data," said Cahn. "It's a design choice whether Google wants to put their users at risk of this type of search."

Likewise, he said, states must act. "This is already happening. We already see electronic surveillance being used to target pregnant people. The only question is how quickly anti-abortion policing ramps up to these search tactics."

Two first-in-the-nation bills are currently under consideration in New York that could offer substantially more protection. One would ban both geofence and keyword warrants as well as prohibiting law enforcement from buying geolocation data from commercial companies. A second would prohibit police from creating fake social media accounts that allow them to pose as friends or medical providers in order to trick people seeking abortions into identifying or incriminating themselves.

Law enforcement agencies must also reassess their participation in inter-agency information sharing agreements, Cahn said. Current data sharing agreements require local police to share information with their counterparts in other states, which could easily enable the tracking and prosecution of abortion seekers from red states who travel to other parts of the country to get an abortion.

Such agreements have always caused tension, Cahn said, "because it's meant that so-called immigration sanctuary jurisdictions are actually giving information to ICE in some cases. But now, if you're part of an inter-agency information sharing agreement, and you are honestly a pro-choice jurisdiction, you can't in good faith remain when you know the people receiving that data are going to use it to arrest pregnant people."

For years, Cahn said, civil rights groups have fought the use of surveillance technologies like geofence warrants, arguing that certain types of information should be off-limits as policing tools. For just as long, he said, many lawmakers have been "comfortable enabling these types of abuses when different communities were being targeted."

"Now we know the targets will include pregnant people," he said, and "we'll see people who once felt very far removed from the threat of mass surveillance being intimately targeted."

"It is very much that incremental expansion of government authority," he said. "We ignore it and we ignore it. And then suddenly, we and our families and those dearest to us are in the crosshairs."

Read more on the likely fall of Roe v. Wade: