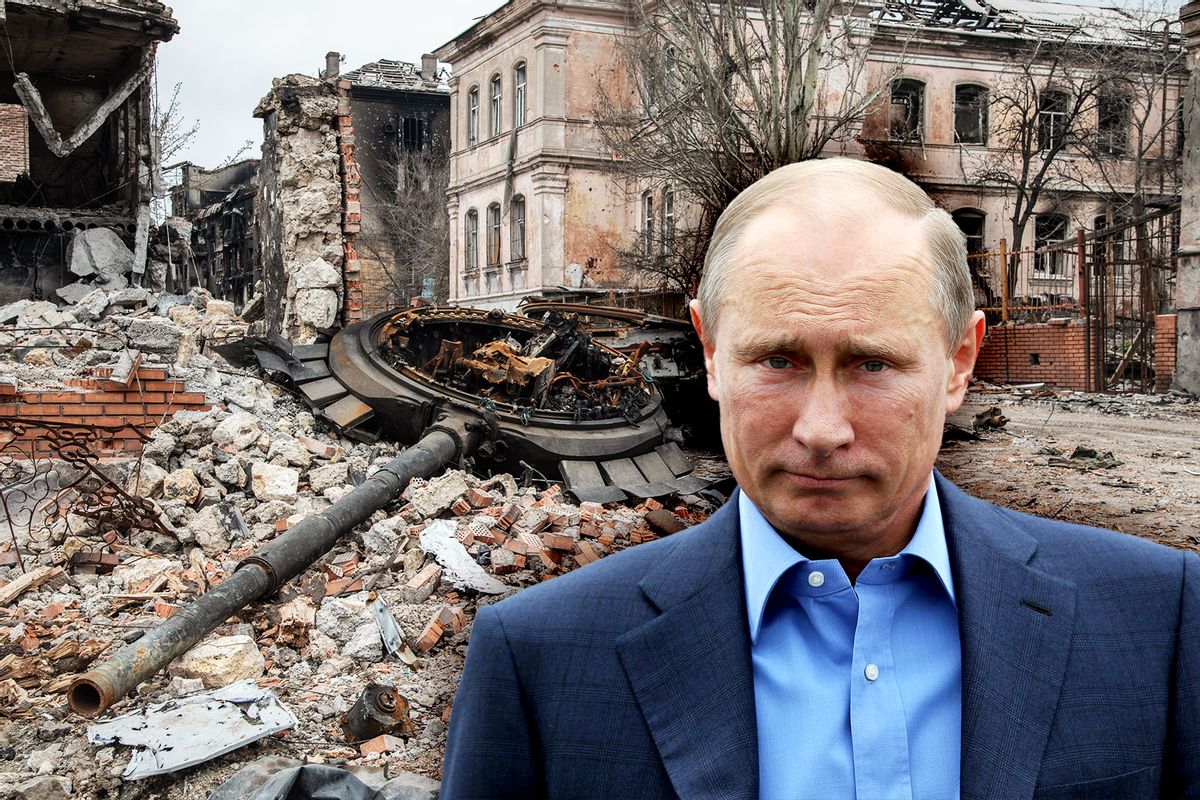 On March 6, 2022, 14 days into Russia's war against Ukraine, a video was shared on Facebook showing seven-year-old Amelia Anisovych singing "Let it Go," the hit song from the Disney musical "Frozen," inside a crammed Kyiv bunker. A sign of beauty, resilience and hope, it was viewed more than eight million times within days of posting.

The video was noteworthy as an anomaly. Most images of the war in Ukraine have logically focused on death, destruction and devastation. President Volodomyr Zelenskyy has made a point of trying to counter these negative images on his personal Telegram account where he posts photos of hope and strength with the caption, "Life must win the war."

Yet for many of us — especially those of us with little direct knowledge of the nation — the horror, pain and damage overshadow anything else we know about the country. The endless sea of disturbing images emerging from the Russian war in Ukraine has made it hard to think about Ukrainian beauty, brilliance, intellect and art.

RELATED: Has Russia been beaten? This military expert says that moment is coming soon

The problem is that we can't process the scale of loss in Ukraine if we aren't fully aware of what has been lost.

And that is exactly the way that Vladimir Putin wants it.

As Peter Pomerantsev, author of "This is Not Propaganda: Adventures in the War Against Reality," has explained, Putin isn't just trying to take over territory; he wants to obliterate any sense of Ukrainian identity. "History, reality, memory are being destroyed and rewritten," he writes in an essay for TIME. "Putin and his spin doctors propose rewriting the story of Ukraine, its people, their lives and their right to define their own meaning."

Putin's efforts are aided by the unique history of Ukraine, a region that has suffered efforts at foreign domination since the 13th century in a way that has made it difficult for the extraordinary intellectual and artistic heritage of this nation to be easily legible.

The territory we know as Ukraine today has been repeatedly occupied, overtaken and subjected to power disputes from foreign interests. These historical upheavals have led to the fragmentation of the story of Ukraine.

Joseph Conrad, for example, was born in Ukraine. For nearly two centuries his family lived there and he spent a year in Kyiv at the age of nine for health reasons, but his ties to Ukraine are rarely noticed due to the fact that during his lifetime "Ukraine" referred only to the Kyiv province.

Similarly, Andy Warhol's parents were Rusyn peasants who were born in modern-day Slovakia. Tracing the ethnic ties of the Rusyn community is tricky since they lived on the borders of what is now Poland, Slovakia and Ukraine. This has led to speculation on Warhol's ethnic background with debates over whether he is best understood as Hungarian, Ukrainian, Polish, Czech or Slovak. But the real point is that the complex history of the region has frustrated the connection of historical figures to contemporary national cultures. Whether we understand Warhol as specifically Ukrainian or not, there is little doubt that Warhol, who lived in a cloistered Rusyn-speaking community in Pittsburgh until he was 21 years old, was influenced by his history of ties to the region.

The real damage to the cohesive story of Ukraine was done deliberately.

The vicissitudes of the history of Ukrainian culture is at least, in part, a consequence of the region's complex ethnic history. But the real damage to the cohesive story of Ukraine was done deliberately. In the 19th century, when the territory was under the rule of the Russian Empire, there was a rise in the development of Ukrainian culture, education and research. This surge of cultural expression coincided with Russia's decision to ban the Ukrainian language in its own territory.

In fact, there has been a pattern whereby the growth and flourishing of Ukrainian cultural identity has been met with repression. Especially significant in today's context is the Ukrainian Revolution of 1917-21 when the nation struggled for independence and worked to establish statehood, including advancing Ukrainian culture through education and the arts.

This nascent national development was quickly disrupted when the Bolsheviks took over. But, importantly, even though they were under foreign rule, the Ukrainian people refused to relinquish their own national culture, leading to a "golden era" of literature and the arts and to the use of the Ukrainian language at all levels of government.

That cultural resistance was then met with brute force. Joseph Stalin implemented a plan to literally starve the nation, when he forced farmers off of their lands and caused the Great Famine of 1932-33, also known as the Holodomor (death by starvation). But the critical point is that he didn't just starve the Ukrainians of food; he also tried to starve them of their culture. During that period, most of the intellectual elite was either executed or exiled. Public icons of cultural identity — churches, historical landmarks, cultural spaces — were also destroyed.

What got lost wasn't just that entire generation. In addition, the cultural and artistic narrative arc of the nation was either erased or subsumed within a narrative that conscripted Ukrainians into Russian and/or Soviet cultural narratives. This is why, for example, a composer like Sergei Prokofiev, who was born in 1891 in a region of the Russian Empire that is now Ukraine and whose work referenced Ukraine directly, is often simply considered to have been a Soviet composer. It is also why a highly influential artist like Kazimir Malevich, who was born in 1878 in Kyiv, is also often described simply as "Russian," even though he first studied art in 1895 at the Kyiv Art School and referred to himself as Ukrainian.

The deliberate erasure of Ukrainian culture by the Soviets is also why Ukrainian-born and -educated Sergei Korolev, who directed the Soviet space program and designed Sputnik, is read principally within the Soviet historical playbook. Or why the iconic Odessa steps sequence from Sergei Eisenstein's "Battleship Potemkin" (1925) is typically viewed within Soviet culture alone. As Volodymyr Kravchenko notes in the Harvard Ukrainian Studies journal, "Historically, Ukraine played a very important role in the process of building the Soviet nation-state." Yet, Ukraine never was considered an authentic nation-state within the USSR. "For most Russians," he explains, "Ukraine continued to remain de facto as Little Russia."

A sovereign nation needs more than the integrity and security of its borders; it also needs its culture.

This explains why few are aware of the fact that three Soviet general secretaries — Nikita Khrushchev, Leonid Brezhnev and Konstantin Chernenko — were either born or raised in Ukraine. In fact, Ukrainian leaders led the Soviet Union for more than half of its history. But to the extent that Ukrainian contributions are formally noted in Russia today, they are done so only within an aggressive narrative of "unity." Putin, himself, noted the importance of Ukrainians to Soviet history in an essay published in July of last year. "Incidentally," he wrote, "during the Soviet period, natives of Ukraine held major, including the highest, posts in the leadership of the unified state." These accolades, though, were offered only to erase their Ukrainian identity. Putin writes that "true sovereignty of Ukraine is possible only in partnership with Russia" — a statement that belies the concept of sovereignty itself.

A sovereign nation needs more than the integrity and security of its borders; it also needs its culture, a fact that leads us to yet another powerful legacy of Ukrainian culture. As Pomerantsev puts it, "by virtue of being such a concentration of cataclysms, the place where the world's evils can coagulate, Ukraine is the place which gives birth to its antidotes."

As I've said, Ukraine is not just a place of chaos and suffering; it is also a place of innovation and beauty. But perhaps even more powerful to its story is the fact that two legal concepts central to the fight for human rights and international law came from lawyers educated in Lviv, Ukraine. Hersh Lauterpacht coined the concept of "crimes against humanity" in reaction to his experiences witnessing the violence of pogroms and the Holocaust. Raphael Lemkin defined "genocide" in response to his experiences of the Holodomor caused by Stalin's imposed famine. Both men, according to Philippe Sands in his book "East West Street," studied at the same university and had the same professors. While they never met, they were both deeply influenced by Lviv — what was then referred to as "the Paris of Ukraine."

Crimes against humanity refer to a state that has practiced exceptionally harsh wartime behavior. Genocide, in contrast, focuses on the notion of attempting to eradicate an entire group of people. It is no small irony that these Ukrainian-borne concepts will be used to debate which of these two grotesque acts is more apt to describe what Russia is doing in Ukraine today.

To that end, today's efforts to document the war crimes in Ukraine are taking a decidedly different turn beyond the documenting of the facts of the atrocities. Pomerantsev is working with Ukrainian journalists to launch "The Reckoning Project," which will go beyond recording testimony and offering evidence of war crimes. Pomerantsev explains that it is clear that the project needs "to tell not just the stories of people hurt and killed by the war, but also the culture and everyday life Putin is trying to wipe out." The goal is to produce material for transitional justice but also material that will allow others to tell the story further.

To truly see Ukraine we need to see the whole story, not just the images of the ravages of war.

When "Frozen" star and "Let It Go" vocalist Idina Menzel retweeted the video of Amelia Anisovych singing in a Kyiv bunker, she wrote, "We see you. We really, really see you." Pomerantsev, too, commented during a lecture at Penn State in April that the war had led many Ukrainians to feel they were being seen for the first time.

But to truly see Ukraine we need to see the whole story, not just the images of the ravages of war. When we look at footage of destroyed churches, schools and public buildings, it means less if we don't know what they looked like and what they offered their communities before their destruction. And when we note the lives lost and the families disrupted we value them less if we don't know the stories behind them.

What makes the video of Anisovych especially touching is the fact that she sings the well-known "Let it Go" in Ukrainian, a reminder that she watched the Disney film in her own language, and a sign of how culture can both be universal and local.

The Russian war in Ukraine isn't just for territory or even sovereignty; it is a battle over the right to tell your own story in your own words and in your own language and in the way you want. It's a battle to have your story seen and heard. And, if Anisovich's singing is any indication, it's a battle Putin may well lose.