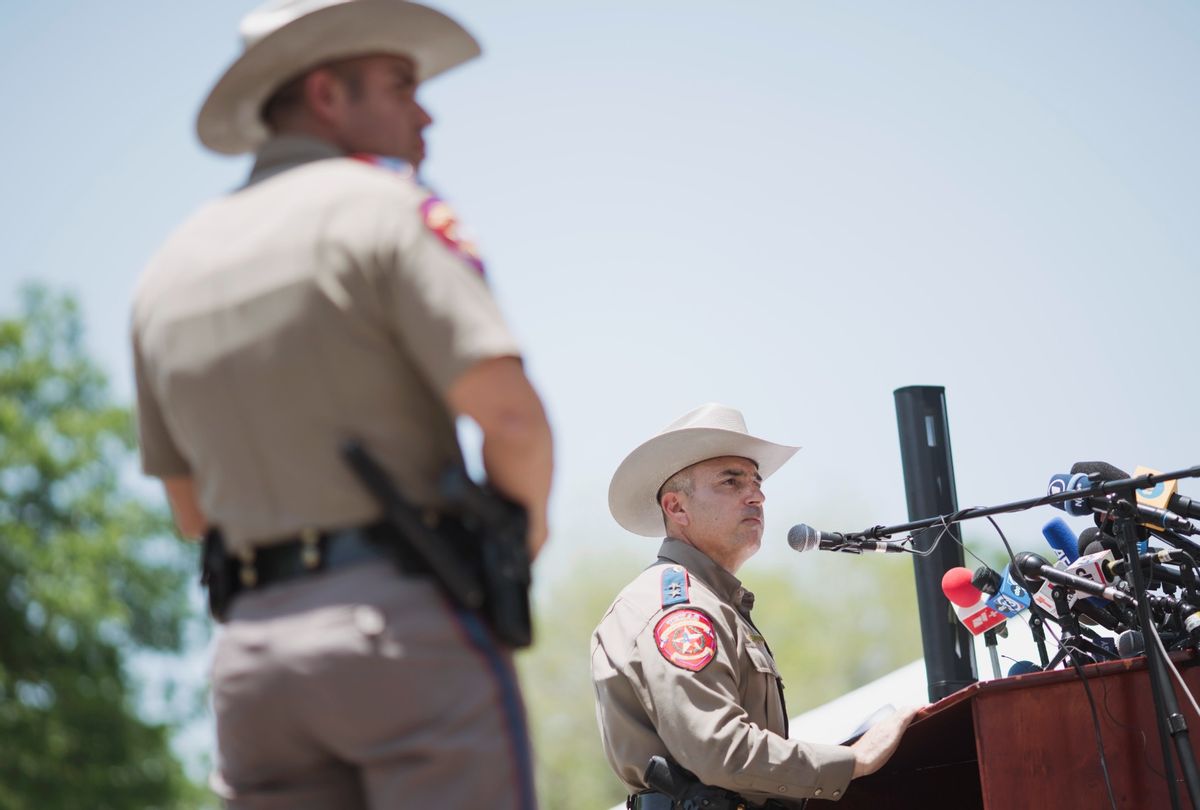 Victor Escalon, Regional Director of the Texas Department of Public Safety South, speaks during a press conference on May 26, 2022 in Uvalde, Texas. (Photo by Eric Thayer/Getty Images)
--

Texas state police on Thursday walked back key claims they repeatedly made about the Uvalde school shooting after coming under scrutiny for failing to stop the gunman until 90 minutes after he arrived outside of the school.

Texas Gov. Greg Abbott and spokespeople at the state's Department of Public Safety said since the attack that school police officers "engaged" the shooter before he entered the school, praising law enforcement's "quick response." But DPS regional director Victor Escalon acknowledged during a hectic news conference on Thursday that police did not engage the shooter and, in fact, there was no school police officer there at all before the gunman entered the school.

"He walked in unobstructed initially," Escalon said. The official said the gunman, 18-year-old Salvador Ramos, shot his grandmother and crashed her pickup truck before going to the school.

"He was not confronted by anybody," Escalon said.

In fact, Ramos crashed his car at around 11:28 am but did not enter the school for about 12 minutes. The gunman got out of his truck and shot at two people across the street, Escalon said, before shooting multiple times at the school building. Ramos entered the school through an unlocked side door at around 11:40 am, according to Escalon.

The gunman walked into a classroom and fired more than 25 times, the official said. Officers arrived at the school at around 11:44 am and tried to engage the gunman but came under fire and backed off.

The suspect was in the classroom for about an hour as police gathered outside while worried parents begged officers to enter the building and stop the gunman. Escalon claimed police during this time were evacuating other parts of the school and at some point tried to negotiate with the suspect. Eventually, a Border Patrol tactical team arrived and breached the classroom, killing the suspect in a shootout, according to Escalon.

It's unclear why it took so long for law enforcement to stop the gunman. Most "active shooter" attacks in the U.S. end within five minutes, according to FBI data, but the Uvalde attack lasted 12 times as long. CNN reported that there were about 100 federal agents and local police officers on the scene.

"They [didn't] make entry immediately because of the gunfire they were receiving," Escalon said while dodging questions from reporters.

Parents who lost their children in the attack slammed the police response and the cops' narrative following the shooting.

"They said they rushed in and all that, we didn't see that," Javier Cazares, whose 9-year-old daughter Jacklyn was killed while he begged police outside to let him go into the school, told the New York Times. "There were plenty of men out there armed to the teeth that could have gone in faster. This could have been over in a couple minutes."

The response came under criticism from law enforcement experts.

"If you've got somebody you think is actively engaged in harming people or attempting to harm people, your obligation as a police officer is to immediately stop that person and neutralize that threat," Don Alwes, a former instructor for the National Tactical Officers Association, told NBC News. "We don't expect police officers to commit suicide in doing it. But the expectation is that if someone is about to harm someone, especially children, you've got to take immediate action to make that stop."

The stalled response may have cost lives.

"You can't wait until patients go to a trauma center," Dr. Ronald Stewart, the senior trauma surgeon at University Hospital in San Antonio, who coordinated treatment for multiple victims, told NBC. "You have to act quickly."

"Shoot him or something!" a woman pleads in the video.

"They're all just fucking parked outside, dude. They need to go in there," a man is heard saying.

"The police were doing nothing," Angeli Rose Gomez, whose children attend second and third grade at Robb Elementary, told The Wall Street Journal. "They were just standing outside the fence. They weren't going in there or running anywhere."

The response took so long that Gomez had time to drive 40 miles to the school after hearing about the shooting to plead with police to enter. Gomez and other parents urged law enforcement to go into the school before U.S. Marshals put her in handcuffs and told her she was being arrested for intervening in an active investigation, she said. Another father was tackled and thrown to the ground by police, she said, and another parent was pepper-sprayed.

Gomez said she convinced local police officers that she knew to persuade the marshals to free her. Once she was free, Gomez jumped the school fence and evacuated her children to safety.

A spokesman for the Marshals Service denied that anyone was handcuffed.

"Our deputy marshals maintained order and peace in the midst of the grief-stricken community that was gathering around the school," he told the Journal.

Desirae Garza, whose niece Amerie Jo Garza was killed in the shooting, told The Times that her brother Angel was handcuffed by a local police officer as well while trying to run into the school.

"Nobody was telling him anything. He was trying to find out. He wanted to know where his daughter was," Garza said.

After the shooting, Gomez said she saw police use a Taser on a father who approached a bus evacuating students to get his child.

"They didn't do that to the shooter, but they did that to us. That's how it felt," she told the Journal.

Rep. Joaquin Castro, D-Texas, called out state officials for providing the public with "conflicting accounts of how the tragedy in Uvalde unfolded."

Castro sent a letter to FBI Director Christopher Wray on Thursday calling for a federal investigation into the police response.

"I'm calling on the @FBI to use their maximum authority," he tweeted, "to investigate and provide a full report on the timeline, the law enforcement response and how 21 Texans were killed."