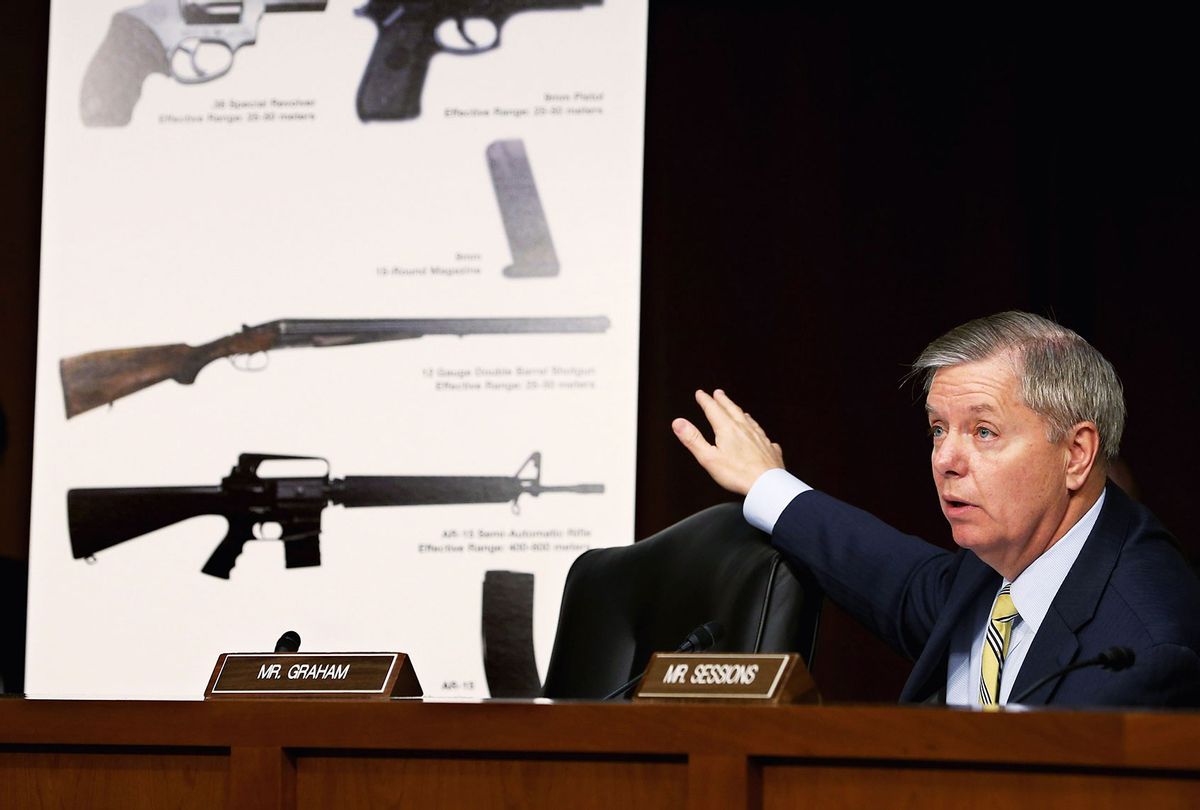 After the shooting in Uvalde, TX on Tuesday, the Republican response has been so glib and cold-hearted that one has to wonder if they want people to hate them.

Despite perfunctory rhetoric denouncing the shooting, Gov. Greg Abbott of Texas's overall message could be summed up as the shrug emoji. "More people shot every weekend in Chicago than there are in schools in Texas," he argued. He added some boilerplate Republican language about "mental health," even though everyone knows he is actively fighting to take away mental health care. Sen. Ted Cruz was equally facile, sneering that it was "crass" of Democrats to be angry and victim-blaming the school for having more than one door (yes, he said this). He also insisted that "armed law enforcement on the campus" is the answer, even though there were already multiple armed police officers on the scene who stayed outside the school while parents begged them to charge in and rescue the kids. Tucker Carlson of Fox News, of course, only speaks in Smarmy Jerk so he really leaned into the "there's nothing to be done" message Wednesday night. "A person who is intent on committing violence is very hard to stop," he claimed, adding that neither "act of Congress" nor "gun control" will do a thing to stop it. In reality, of course, international data shows the opposite, gun control is very effective at stopping gun violence.

Abbott didn't even bother to cancel a fundraiser in the hours after the shooting. The National Rifle Association, meanwhile, is having a convention in Houston this weekend, with Donald Trump, Abbott, and Cruz still scheduled to speak. Naturally, guns are banned at the convention, because Republicans are beyond pretending to believe their own "good guy with a gun" nonsense.

The message from Republicans, loud and clear, is the one made famous by Melania Trump's jacket: "I Really Don't Care, Do U?"

Demoralizing ordinary people is the best voter suppression — and nothing induces helplessness like our gun debate.

The GOP has a death grip on the federal courts and their near-absolute obstruction power in Congress, thanks to Democratic filibuster enthusiasts Sens. Joe Manchin of West Virginia and Kyrsten Sinema of Arizona. So it's hard not to feel total despair at this moment. As Brian Karem notes at Salon, while he may "refuse to grow numb," there "are many who've abandoned hope" altogether. The satirical site The Onion reflected this weariness, turning their front page the day after the shooting into nothing but headlines reading, "'No Way to Prevent This,' Says Only Nation Where This Regularly Happens." It is the same story they run after every mass shooting.

That numb feeling you're experiencing? That exhaustion? That tugging urge to just give up, abandon politics entirely, and just concentrate on your own life? That's what Republicans want you to feel. That's why they act this way, to exhaust you. The more that ordinary Americans feel that nothing we say or do can make a difference, the better the political landscape for Republicans.

And it's not just about the gun fight, where Republicans have browbeaten most of us into thinking that change is impossible. The goal of this demoralization project is much bigger than guns. Completing the authoritarian takeover of America isn't just about turning regular Republican voters into QAnon-addled fascists. It's also about sapping everyone else of the will to fight back, leaving the pathway to power cleared of anyone who might get in their way.

That's why so many of the pro-gun arguments — like Cruz's "one door" nonsense — are both so glib and so very stupid. These aren't people trying to make reasonable arguments that can be debated and dissected. These are people saying stuff so obviously false, so obviously dumb, and so obviously in bad faith that it's a total waste of breath to argue back. This is why the term "gaslighting" became so popular in the Trump era because that's the basic rhetorical strategy here. This is not just garden variety lying, but being so adamant about an obviously untrue thing that your interlocutor gives up fighting for the truth out of sheer exhaustion.

The more that ordinary Americans feel that nothing we say or do can make a difference, the better the political landscape for Republicans.

Republicans aren't trying to persuade anyone who isn't on their team already. They're just trying to make you feel numb and demoralized. Dispirited people give up voting, protesting, and donating. Political engagement is hard work — and Republicans have made sure of that by passing voter suppression laws — and it feels hard to justify the effort when nothing gets better. You may support abortion rights and gun safety laws, but why give over a beautiful Saturday morning to a protest when you believe it will not move the needle? It's not "selfish" to want to use your free time enjoying your life instead, not when you are starting to believe that political action is a flat-out waste of time.

So the more that ordinary, decent people check out of politics entirely, the easier it is for Republicans to win not just elections, but political fights. The best opponent is, after all, the one who has no strength left in her to fight.

In April, Sarah Jones of New York magazine had an intriguing interview with Greg Yudin, a sociologist in Moscow, about how Russian politics got so degraded that the wholly evil and ill-advised invasion of Ukraine was even possible. It is not that there's widespread genocidal intent towards Ukrainians in Russia, Yudin argued, it's that most Russians of good will have checked out of politics entirely, removing all resistance to the ever more authoritarian and unhinged urges of President Vladimir Putin.

"Russia is a completely depoliticized country," Yudin explained to Jones. "Russians are completely certain that there is no possible way to change anything through politics, that no change is possible in general." So instead of engaging in politics, "people prefer to lead their private lives," to the point where "political activity is all just complete nonsense to a vast majority of Russians."

RELATED: I haven't gotten jaded or cynical about mass shootings — but it's getting harder

One can see how that's starting to happen in our country, as decent people pull away from politics and think about how to spend the rest of their precious time on Earth doing anything else but butting their heads against brick walls. It doesn't help that Democrats are widely perceived as totally impotent. A recent CBS poll shows that, while most Americans describe Republicans as "extreme" or "hateful," the favorite word for Democrats was "weak." Given a choice between the two, it's not nuts to choose instead to check out altogether.

The irony of this is, of course, is that change is possible, but only if the majority of Americans who aren't right-wing nuts show solidarity and work together, both to toss out Republicans and to reshape the Democratic party into a more effective one. That's the conundrum though: Before people put in that work, they want assurance that it will be worth it. But until the majority of people put in the work, fighting is not going to be worth it. It ultimately creates a feedback loop that leads to greater and greater inaction.

Nothing fuels this sense of helplessness and despair more than the aftermath of a mass shooting. It's exhausting, this predictable path of Republicans talking nonsense until the storm blows over, and then nothing happening to prevent the next one. That pathway feels the same whether people fight hard — as happened after the Parkland shooting — or whether they just sit on their hands and do nothing. And things aren't looking so hot right now, as Democrats in Congress have already acceded to the impossibility of passing any gun safety bills and are headed to vacation instead.

Of course, Republicans are fine with the status quo of routine mass shootings. Of course, they do everything in their power to make such crimes more common, like passing laws making it easier for killers to get guns. Almost nothing saps the hope out of politics more than a mass shooting. Demoralized is right where Republicans want Americans to be.