And how the president tried to discourage her from focusing on anti-bullying on social media, because he is a bully 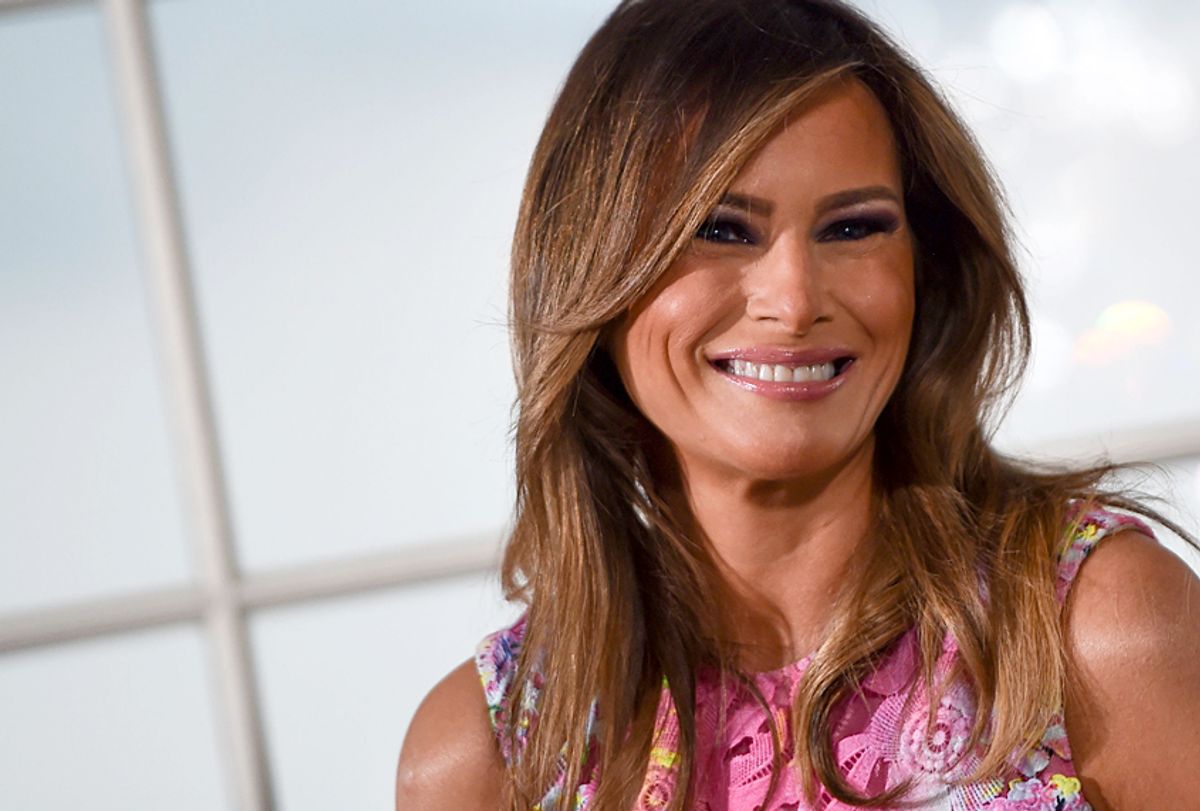 The elusive first lady is the subject of a New York Times profile titled, "Melania Trump, a Mysterious First Lady, Weathers a Chaotic White House." In it, reporters seek to unearth the true Melania, a first lady whose public persona has been disjointed — at times opposing the president, at times complicit — and yet always somewhat of an enigma.

The media is often left playing guessing games as to Melania's intentions, as her actions and statements never quite match. Who could forget her wearing a "I Really Don't Care, Do U?" jacket to visit migrant children separated from their parents at the border. And yet, the first lady went.

Times reporters Katie Rogers, Julie Hirschfeld Davis and Maggie Haberman describe Melania as "a Rorschach test for public perceptions of Mr. Trump’s White House: People tend to see in her what they already believe about the president. To conservative supporters of the president, she is a quietly loyal helpmate. To Mr. Trump’s critics, she is an enabler trapped in a gilded cage, occasionally breaking out to express a divergent opinion or make a high-profile gaffe before retreating again into silence."

Here are the five most-telling tidbits from the profile, published Friday:

On that infamous fashion decision:

In June, the Slovenian-born Mrs. Trump, 48, was the only senior administration official to visit multiple detention facilities near the United States' border with Mexico after thousands of migrant children were separated from their parents as part of the administration’s "zero tolerance" immigration policies. But any good intentions were overshadowed by her decision to wear a jacket emblazoned with the phrase "I REALLY DON’T CARE, DO U?" on an official trip to Texas. It was widely seen as inappropriate, insensitive and unbecoming of her office.

Mr. Trump seized on the moment to say his wife was addressing the news media, but a person close to Mrs. Trump said the jacket was actually directed at anyone — both outside and inside the White House — who wanted to criticize her decision to visit the children in light of the administration’s aggressive immigration policies. The East Wing insisted the jacket had no underlying message.

President Donald Trump feels "guilty" about the criticism against Melania, because of his alleged extramarital affair with pornographic star Stormy Daniels:

In January, Mrs. Trump was said to be infuriated by reports of her husband’s attempt to pay off the pornographic film actress known as Stormy Daniels, with whom he is accused of having an affair shortly after Mrs. Trump gave birth to their son. The president’s allies say he remains concerned about her reaction whenever headlines about his extramarital behaviors crop up, and he has told friends he feels guilty about the criticism she has faced.

Melania is the "strongest voice in the president's life":

In private, a former White House official said, Mr. and Mrs. Trump give the impression that they like one another, but their rapport is not particularly warm. One person who has spent a considerable amount of time around her said Mrs. Trump was far more relaxed outside the presence of her husband than when he was around.

Melania has tried to get Trump to eat healthier. Also, they keep separate bedrooms:

At the White House, Mrs. Trump tends to stay in the residence, where she has worked with the kitchen staff to arrange more-healthful meals for her husband — though he still prefers two scoops of ice cream for dessert.

She maintains a separate bedroom from her husband, and when the two travel, they stay in separate hotel suites.

And the most significant information was related to the first lady's "Be Best" platform, which encourages children to engage in positive social media behavior and addressing the opioid crisis:

The president suggested that Mrs. Trump choose a different topic to avoid questions about how the wife of a notorious Twitter bully could lead a campaign to spotlight anti-bullying and other child wellness efforts, and he warned her that she was opening herself to such jeers, people familiar with the conversations said. She rejected his advice, and publicly said she was willing to face the criticism.

Finding humor during a dark year