Children not yet old enough to read or tie their shoes are expected to fend off an assault rifle. It has to stop 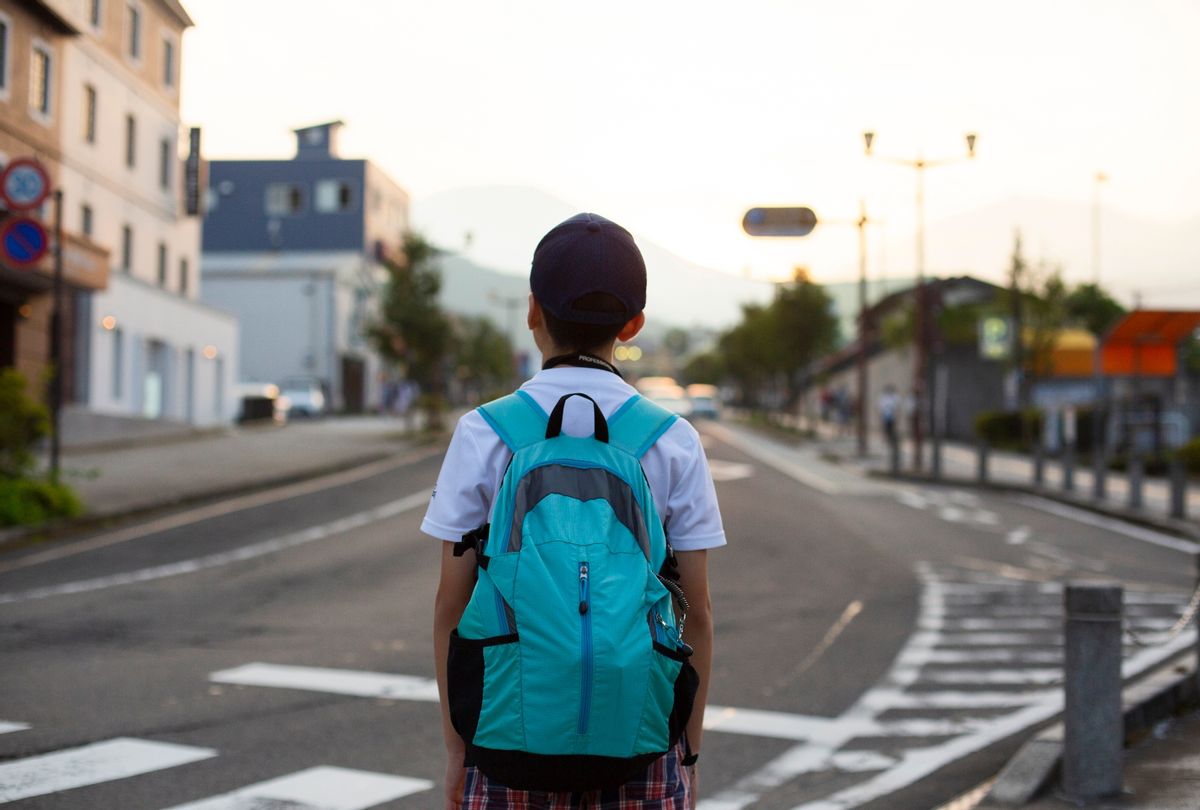 The first time I bought my child a bulletproof shield, he was in kindergarten. A school shooting had happened. I forget which one.

My child was too young for me to explain the story then, too young to worry that he might accidentally hear about the violence on the news, which I wouldn't listen to around him. Too young for social media. But not too young to be in danger at school: a place children are supposed to be safe, with carpet squares for sitting in a circle, a cubbyhole with his name on laminated paper with a smiling red apple.

Sandy Hook had happened by then. Marysville Pilchuck High School. Dozens upon dozens of shootings that most of us don't even remember or know by name because only a couple of children died that time. Only a few.

So, the shield. It was expensive, more than I could really afford as a struggling single mom. It was also heavy. I hadn't planned on that. Naively, I had thought I could just slip it into his backpack, beside his construction truck lunchbox and mittens he kept losing, behind the drawings and finger paintings that kept getting crushed. He wouldn't have to know.

But he wouldn't be able to lift his backpack, which already threatened to teeter his small frame off-balance, with the shield inside. I had to let him go the next morning with no protection.

Every parent does, most of us sending kids off for hours a day without us, relying on babysitters, child care workers, teachers. But watching a very small child walk hesitantly into a very large building alone is a different feeling knowing we live in a country where the child could be the victim of gun violence there. That a gunman could go there, purposefully choose as a target a place with a playground, juice boxes in the cafeteria.

My child was taught, starting in kindergarten, to charge a mass shooter.

When I was in school, the threat of violence seemed to come from within. Kids called bomb threats into the hallway payphone, wanting a day off. I was in school before Columbine, the school shooting that changed perceptions of gun violence and mass shootings for many, but people still worried a gun could be hidden and taken to class. My rural public school could not afford metal detectors. Students had to use clear plastic backpacks or simply carry our books and things in our arms. People thought violence might come from a backpack.

Not from another child, an older one — or, a man — walking up to a school with much younger children inside. A gunman with much stronger firepower, bought legally.

But now we know violence can happen that way. It does all the time. In the years since I left school, gun violence has escalated. According to Insider, at least 554 people, many of them children, have been the victims of school shootings since Columbine in 1999. The Washington Post reported that more than 311,000 children have experienced gun violence at school since then. But that report was in 2018.

Other violence in schools, including weapon use, has decreased in recent years. Not gun violence.

My child was taught, starting in kindergarten, to charge a mass shooter. His school had more active shooter drills than tornado or fire drills. He told me his teacher kept a basket of tennis balls by the door. If a shooter entered, the children were instructed to throw tennis balls at him. When the teacher asked, "What else could the children throw at a person with a gun?" my son said he answered: chocolate milk, if they were in the cafeteria.

The idea of children not yet old enough to read or tie their shoes fending off an assault rifle with cartons of milk is ludicrous, yet that's the plan.

It's embarrassing that Congress asks 5-year-olds to do the job they're too scared to do.

Across the country, in every K-12 school (95% of them, to be precise) children are trained to throw wastebaskets, No. 2 pencils, chairs if they are strong enough to lift them, at shooters. To wave their arms to try to give their classmates an opening to escape. To be martyrs, sacrificing themselves, as teachers are expected to do also, in order that another small child might have the chance to survive.

When my child started his active shooter drills, I was teaching at a state university, in a basement classroom with one exit and one small window, painted shut. I knew that if a shooter entered our classroom, I would die. I prayed that across town at the elementary school, if they too experienced gun violence, the children might live.

Putting the burden of preventing mass shootings onto children who are the targets of them is victim-blaming. It's embarrassing that Congress asks 5-year-olds to do the job they're too scared to do.

In the near decade since 20 small children were killed at Sandy Hook, Congress has passed no gun reform and politicians have taken millions of dollars in donations from the NRA while generations of children learn trauma begins at school.

It's a Band-Aid, a cartoon Band-Aid worn by children, who may forever bear its scars.

With practices including turning the lights off, yelling, having fake shooters and sometimes even bringing law enforcement officers with weapons drawn into schools, active shooter drills are often intense and terrifying, especially for young children. They're also ineffective.

There's no evidence that active shooter drills prevent or minimize gun violence at schools, but there is strong evidence that these drills do lasting harm to children, teachers and staff. One study found "active shooter drills in schools correlated with a 42 percent increase in anxiety and stress and a 39 percent increase in depression among those in the school community."

It's a Band-Aid, a cartoon Band-Aid worn by children, who may forever bear its scars.

When I told my son about the latest school shooting, he asked me where. He didn't ask why because there is no why.

For the past two years, families have been worried about their littlest ones, who have been left unprotected in the pandemic. Many parents of children under 5 – who still cannot be vaccinated — feel totally abandoned, especially as a large part of the rest of the country goes on blithely: to parties, to concerts, to vacations, flinging off masks as mandates drop like flies, despite rising infections, hospitalization rates and death.

It can feel like we're living in a state of perpetual gaslighting. People are dying again; people are dying still; people are being disabled in a mass disabling event — yet airline employees cheerfully encourage flyers to show their smiling, unmasked faces.

At least from COVID, some children have some protection, a tiny bit of preventative control, though many adults choose to willfully ignore it, in the form of vaccines, boosters and masks.

By the evening of the Uvalde shooting, many places were out of stock of bulletproof backpacks, especially the smallest ones.

When I told my son about the latest school shooting, he asked me where. Where did it happen? He didn't ask why because there is no why. There is only: what next? And if again, nothing happens next, no government action is taken, no change is made in U.S. gun laws, why not?

He's old enough now to tell about the bulletproof shield, old enough even to carry it. But he shouldn't have to. No children should have to, alone on their small shoulders.