I made its messes on purpose and I cleaned them up. What kind of self-appointed holiday tradition was this? 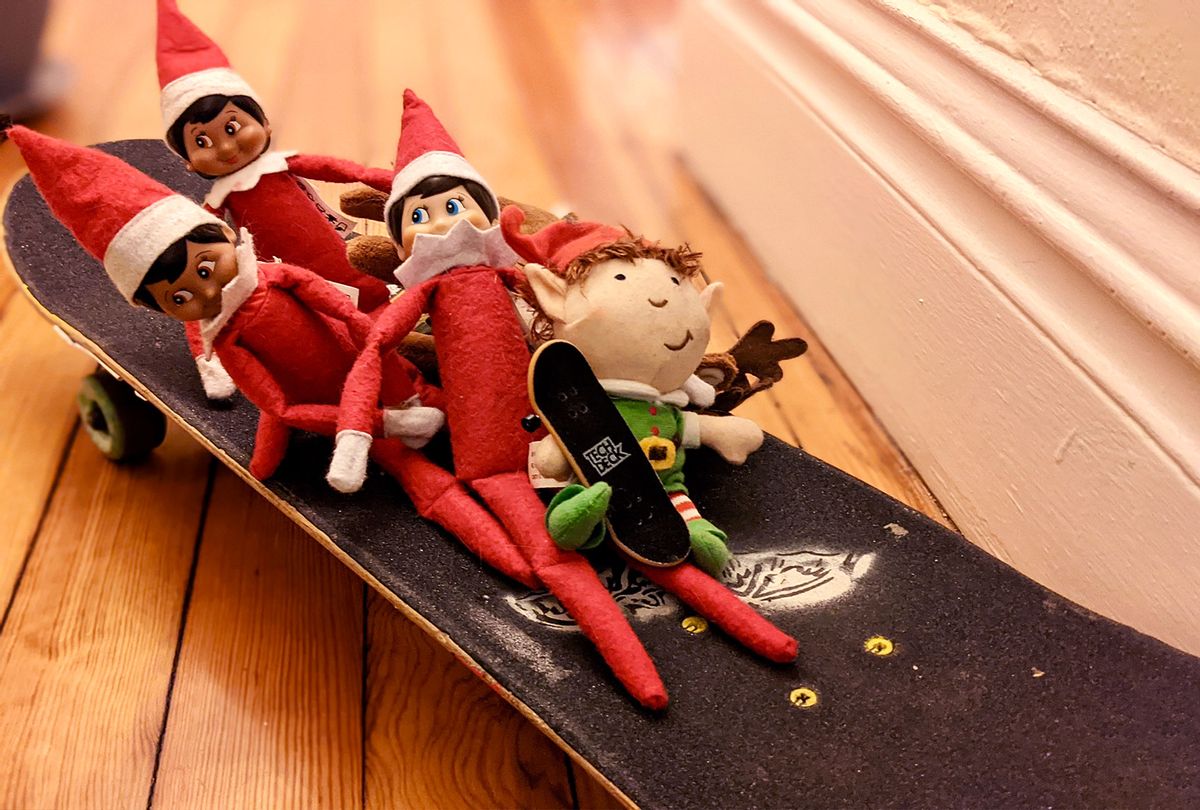 Elf on the Shelf on a skateboard (Alison Stine)
--

The 2021 Christmas episode of "Bob's Burgers" starts with son Gene on the floor of the family room before his beloved turntable, clad only in underwear, tinsel draped like a feather boa, and an elf hat. He DJs Christmas music. Channeling Robin Williams, he calls into the mic, "Good morning, little elves on all the shelves!"

The Elf on the Shelf is a seasonal phenomenon I was blissfully unaware of until my son entered kindergarten. One afternoon, my child came home from school breathless with excitement. There was this new creature! It moved around at night! It was magic — you couldn't touch it. It was connected to Santa Claus and Christmas … somehow.

It took some time for me to unpack that this was a toy, a plastic-faced and felt-bodied toy that other children in my son's class possessed. Elementary school: where my child learned to wait in line and raise his hand, how to cuss, what outdated gender norms were and how to have very specific toy expectations.

Despite its ethereal properties, the elf was sold in stores, where I grudgingly bought the last one on the shelf that December. The elf came with a book lauding its backstory, which was troubling at best. In stilted verse, it set up the elf as a watchdog for Santa, a scout for reporting bad behavior, or as Salon's Mary Elizabeth Williams writes: "an Orwellian nightmare."

If children did anything allegedly bad, the elf would know and tell Santa. If you touched the elf, it would die, basically. The elf was a kind of Mogwai — but no petting!

As a middle man to police kids, the elf toy was, I assume, supposed to make parents' and guardians' lives easier around the holidays. It did the opposite.

The Elf on the Shelf required work: the ceaseless emotional and physical labor of finding new places to put it every night, and new adventures for it to get into which my child could discover, delightedly, the next morning. Because along with being a nanny cam for Santa, the elf was a mischievous imp — at least according to my child, the book, the internet, and the whole terrible, conniving world.

One night the elf would spill flour onto the kitchen counter, and write hello in the powdery mess. (Then someone would have to clean the counter and put away the flour.) One night it would TP the light fixture. (Later, someone would have to roll back up the toilet paper, because we certainly couldn't afford to waste it.) And that someone, every someone, every night or early morning, was me.

I made the messes on purpose and I cleaned them up. What kind of self-appointed holiday tradition was this?

I'm a single parent, and have been basically since my son was born. It wasn't my idea to get divorced or rear a child alone, but something not your idea can become your life, easily. And it was mine alone: all the birthdays, all the doctor appointments, all the school days and teacher conferences. And all the Elf on the Shelf.

I posed the elf in the refrigerator. I posed it at the wheel behind a derailing toy train. Over the years, my son acquired more elves, both those official toys sanctioned by the elf lobby (Big Elf) and knockoffs, a virtual elf army whose limbs grew soft and whose cloth bodies attracted cat hair. Once or twice, I jolted up at two in the morning, remembering the elves. I had to move the elves!

Then the strangest thing happened. I didn't totally hate it?

I was completing a PhD when my son was born, and in the years after, I struggled to find enough employment for us to get by. Most of my life was working or looking for more work. I taught part-time; I worked as a freelancer. Thinking up scenarios for the stupid elf dolls brought a tiny spark of low-stakes joy back into stressful and unsuccessful-feeling adult life.

It was something just for pretend, just for us. I excelled at it.

And my son made it worth it. We never did the elf-as-Santa's-watchful-lackey thing, and after using kitchen tongs to move the toy around to avoid "losing its magic," we abandoned that idea too. I read the book once to him, not knowing what I was in for; we made fun of the maniacal illustrations, then promptly got rid of the source text. We were going to use the elf our way, which was purely for fun.

My son appreciated my ridiculous scenarios: the elves on his skateboard, holding a tiny toy skateboard. The elves writing on the bathroom mirror in my lipstick: We're back! He believed my handwriting was not my own, loopy and disguised, when the elves left him a letter written in special green ink, encouraging him in his artwork and praising his kindness. He saved the letter. He looked forward, every December morning, to new elf magic.

Then he started to grow up.

Now a tween, my son no longer believes in a lot of magic. The gift he wanted most of all this Christmas was not a toy, but hooded sweatshirts. So, I was surprised, early this December, when he brought up the elves and asked tentatively: "I know it's not real. But can we still do it?"

He's posed on that knife-edge between childhood and teendom, and flashes between each, sometimes in the same breath.

So much magic has been taken from my child and all children. So much childhood has been taken: birthdays and graduations, family visits and vacations, sleepovers, school trips and just plain ordinary school days — even the simple act of playing on playgrounds. If I can bring a tiny bit of magic back and help it last a little longer, if I can make this difficult time a little easier, I'm going to do all that I can.