The swarming secrets of “Yellowjackets”

Mysteries past and present ratchet up the tension as the survivors navigate symbols, hormones and so much blood 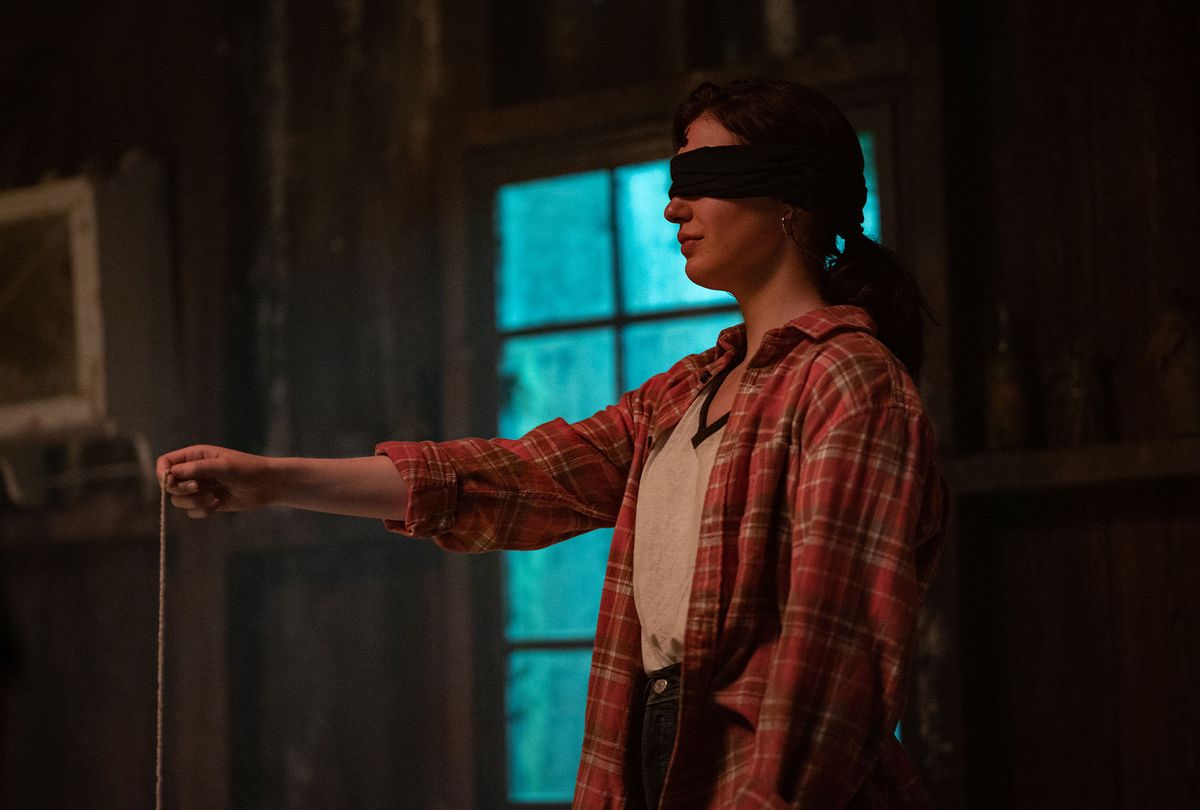 The reason I got a "B" in Senior English was "Lord of the Flies." I wrote my term paper about why "Lord of the Flies" would have been a different story had it been a cast of girls and not simply boys in the book. That was not the "compare and contrast two characters" assignment my high school teacher wanted — and I promptly failed the paper. This one's for you, Mrs. Ruth.

"Yellowjackets," airing on Showtime, borrows heavily from William Golding's 1954 novel about school boys who descend into sadism after their plane crashes on a deserted island, though last Sunday's episode of the Showtime show goes to a place the stoic British novel wouldn't dare: menstruation.

In "Yellowjackets," as in my ill-fated English paper, it's a girls' soccer team on a small, doomed plane. It was a rugby team on the real-life plane that crashed in the snowy Andes Mountains in 1972. The survivors of that crash eventually resorted to cannibalizing deceased passengers, as documented in the 1974 book "Alive: The Story of the Andes Survivors," and the subsequent 1993 movie "Alive." And girls were on the deserted-island-crashing plane in "The Wilds," an underrated 2020 Amazon Prime series. Then, of course, there's "Lost," the ABC plane-crash-weird-island series to which "Yellowjackets" is most often compared.

RELATED: "Yellowjackets" is a fantastic, terrifying plummet into the darkness of female desire and rage

But "Lost" seems timid in comparison to "Yellowjackets," which reveals the cannibalism at its core early. The very first scene features a barefoot girl being pursued through the snow. Animal sounds decidedly not made by animals ricochet through the trees as she falls into a pit, rigged with stakes. A girl — looking younger than a teen — in animal pelts, a makeshift mask, stained pink sneakers and a ravaged soccer shirt leans over her. It's an uncomfortable and bloody start.

This is not a new idea, though, even the cannibalism aspect, and at times, "Yellowjackets" can feel like a mishmash, a collage of influences that doesn't work quite as well as the intense title sequence promises. With its thrashing tune "No Return" by '90s veterans Anna Waronker and Craig Wedren, it feels like a yearbook on fire.

But one of the surprising strengths of "Yellowjackets" is that it has a double cast, and the story switches often quickly and seamlessly from the past to the present, where the few surviving Yellowjackets are not doing well, not at all. Shauna (Melanie Lynskey) the center of the series, is an overlooked, stay-at-home mom, numbing herself with a new affair. Taissa (Tawny Cypress) has launched a run for public office — going against how the survivors swore they would stay out of the public eye — and struggles to manage her career, her relationship, and the increasingly troubling behavior of her son, played by Aiden Stoxx. Natalie (Juliette Lewis) has gone a typical trauma path as understood by Hollywood: substance abuse, while the creepy Misty (Christina Ricci) abuses elders in a nursing home, and may be blackmailing her former classmates.

Somebody is, as the survivors receive postcards with a mysterious symbol on them, the evocative image of a sort of stick figure in a dress with a line drawn through it and a hook or curved knife below. 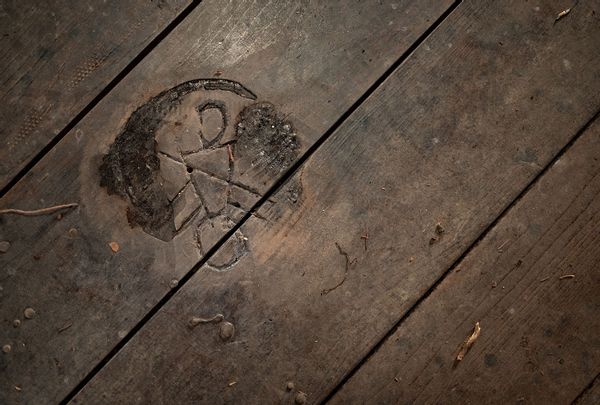 Like CROATOAN carved on the trees around the lost colony of Roanoke, we see this symbol in the past on a tree near where the Yellowjackets find an abandoned cabin and take up residence. We see the symbol etched repeatedly into the floor of the attic where the skeleton of the cabin's former resident, a dead hunter with a shotgun and missing fingers, is discovered.

In "Lord of the Flies," it was the body of a crashed airman in the trees who took on a god-like quality for the struggling boys, who thought he was "the beast." In "Yellowjackets," it's the dead hunter, and the girls attribute the eeriness of the setting to him.

Before he died, was the hunter keeping watch from his perch, hunting, or being hunted? The girls decide to do a séance to find out, and uncover little except that Lottie (Courtney Eaton) can apparently speak French now, possibly while under the influence of a ghost. "Hungry . . . You must spill blood or else," she cries.

Is the stick figure a sign meant to ward off evil, or to draw it, or to mark prey? And will the cannibalism of "Yellowjackets" be supernatural in origin, physical survival, or a coping mechanism, a ritualized way to make order in the spiraling, unknown world? A lot of the tension of "Yellowjackets" comes from the mystery of where other survivors are in the present day, and how much longer they last in the past. Will eight die in the wilderness, as predicted by the attic séance? Are the girls even alone in the woods?

Some viewers have questioned where exactly a whole soccer team could be lost in North America for 19 months. In Canada, apparently. If the symbol is a nod to Roanoke, perhaps the girls, like one theory goes about the disappearance of the colonizers, will join forces with others in what could be another violent homage to settlements like Jamestown.

But with the exception of Coach Ben (Steven Krueger) all the survivors are still just teens in the past, and in the "Blood Hive" episode, two romances start in the woods, against a backdrop of blood. Survival is a bloody business. The girls are on their periods, and hunted animal carcasses, hanging above buckets of blood, are ever-present in the show, which won't let us forget the coming violence. 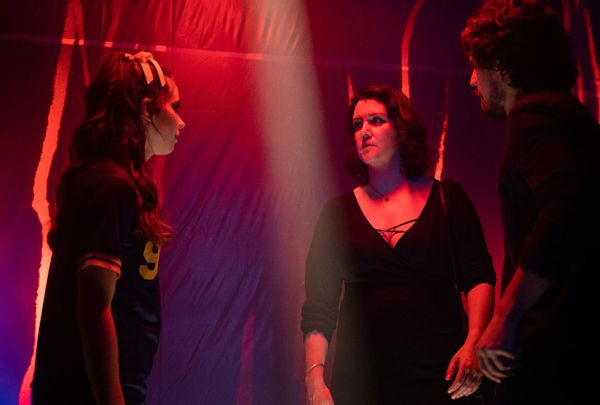 "Yellowjackets" loves an extended metaphor, and in the present scenes, there is a can of paint styled like blood, the blood-red word "SPILL" graffitied on Taissa's house. Natalie and Misty, trying to find out more about survivor Travis' alleged suicide, meet a contact in a red-tinted restaurant (I'd really love a whole series of "Lewis" as the shotgun-wielding Natalie just solving crimes, by the way) while Shauna confronts her daughter Callie (Sarah Desjardins) at a Halloween party with red curtains, a strange blood-like light dripping off the walls.

Callie has taken drugs and gone into the city, against her mom's wishes, and tearfully confesses that she feels sorry for all Shauna has been through. Shauna, in typical emotionless fashion, dismisses it: "Bad things happen in life. I'm fine." But her daughter knows better. "You're not. You're so not fine."

It's unclear exactly how much the outside world knows about how the girls survived, but one of the most interesting parts of "Yellowjackets" is how it handles ambiguity and duality. Shauna thinks she sees the ghost of her beloved Yellowjacket friend Jackie at the Halloween party — but it's actually Shauna's daughter, who dresses in the soccer uniform Jackie's parents gave Shauna; Callie didn't know it was the real thing. Taissa does seem to be hallucinating a person with blood coming out of their eye sockets and a wolf, however, and her son keeps speaking of "The bad one . . . the lady in the tree." He's papered the windows of his room with drawings to try and hide from her — but is she real? Is any of it?

The disadvantage of unrolling a mystery this way is that it strings out the story thinly. You gotta have a gimmick, but you gotta have more than that too. Will the payoff be worth it? Or is trauma the real and only story?

With "Yellowjackets," we know the end at the beginning. The trick is how we get there, how long we can be strung along, and if the bite lives up to its buzz, buzz, buzz.