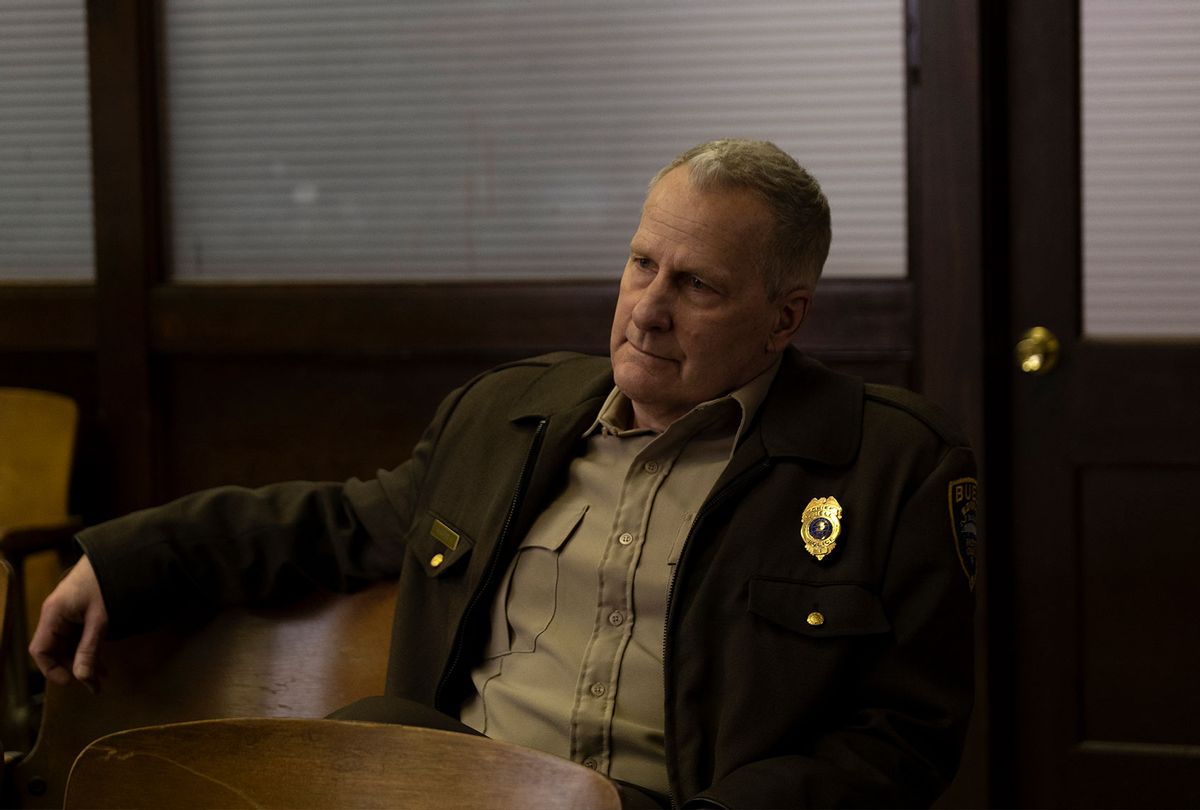 Perhaps the time has come for a moratorium on grim murder dramas set in bedraggled small towns. In case you doubt this, take in an hour or two of "American Rust," what with all its sooty interiors and parade of Buell, Pennsylvania's perpetually stricken faces.

Ruminate upon the inability of Jeff Daniels and Maura Tierney to lighten the slow crush of sadness constricting your brain with each new tragedy presented, be it major or insignificant, and despite their best efforts to create sympathetic, fully rounded personas out of very little.

They are acting. Everybody is. But they're also working against a story that ticks all the boxes of working-class despair and then some. Does Tierney's thinly realized single mother have a deadbeat, philandering ex who takes pleasure offering her what might as well be bouquets of chlamydia? You bet.

Is there a funeral where "Amazing Grace" plays – on bagpipes? Why, yes.

Showrunner Dan Futterman adapted "American Rust" from Philipp Meyer's 2009 novel, executing it in a way that smacks of playing to that "forgotten" white working class the media obsessed over after in the 2016 election.

That coverage-defining phrase quickly morphed into a branding opportunity as opposed to a pathway to understanding the underlying factors in America's supposedly sudden political and social shift. We got a divertingly problematic revival of "Roseanne" in the bargain, so there's that.

A closer genetic cousin to Futterman's drama is "Mare of Easttown," a phenomenal success that might otherwise lead one to scoff at the suggestion of pulling back on shows like it instead of building more of them. Successful TV always breeds imitators. It's the reason we've been inundated with clones of clones of Tony Soprano for more than two decades, troubling figures whose bones compose the spine of prestige drama.

Daniels' lawman Del Harris is such a man, your standard emotionally hog-tied dude holding all his passions close to his bulletproof vest. Other actors may translate that trait into an enigmatic distance or a quiet simmer. Not Daniels. He conveys Del's hollowness by sullenly trudging through Buell and speaking in a tone devoid of affect. And that's most of what we're expected to connect with.

This makes the tug-of-war attraction between Del and Tierney's Grace Poe translate as a mechanically plotted means to an end as opposed to a palpable energy drawing us in. Since the plot's core tension involves Del's willingness to bend protocols in order to protect Grace's troubled son Billy (Alex Neustaedter) when he's suspected of murder, this requires us to overlook the nagging feeling that the protagonist's conflict isn't anchored to anything real.

The success of "Mare of Easttown" makes the declining factory burg the new favored destination for meaty, complex storytelling. Alas, "American Rust" doesn't meet the bar set by Kate Winslet's vehicle. That show's success rests in the way the script and performances alloyed every friend and neighbor's distinctiveness to the town, making the modest, ramshackle surroundings of Easttown an extension of its folks, as well-rounded and distinct as the area's accent.

Easttown radiates a hunched, grumpy mood that's nevertheless proud, wisecracking, and capable. Buell's personality is entirely defined through lines of dialogue as opposed to revealing its identity through its people.

"Point of fact, we're a lot closer to West Virginia than we are to Pittsburgh in more ways than geography," Del casually mentions at one point, thereby explaining the open carry culture of the place and the deflated look of a main street abandoned by the steel industry.

"Everybody in the holler is on one thing or another," someone else who doesn't sound like he's from a holler drops later, helpfully letting us know this is yet another spot that the opioid epidemic gutted. Each of Buell's defining traits is established like this – by telling, not showing, and by relying on an inclusive cast of actors with filmographies full of premium cable titles to sell us in the line delivery.

None is persuasive enough to justify settling into "American Rust," though. Everyone purporting to be lifelong members of Buell look, move and sound like they're summering there. Neustaedter comes closest to embodying the feel of a kid raised in the Pennsylvania Rust Belt, but that could be the unironic mullet doing the talking.

There can be a gorgeousness in the aching struggle of small-town life, and better shows prove that. People may not be dying to visit Easttown, but a lot of folks would probably make a special detour from their road trip routes to visit Mare or her mother Helen.

Daniels and the rest of the occupants of "American Rust" do little to sell the merits of regular visits to Buell. Instead, they prove that a worthwhile show about a town slumped by a depressed economy should never afflict the viewer with intense anhedonia.