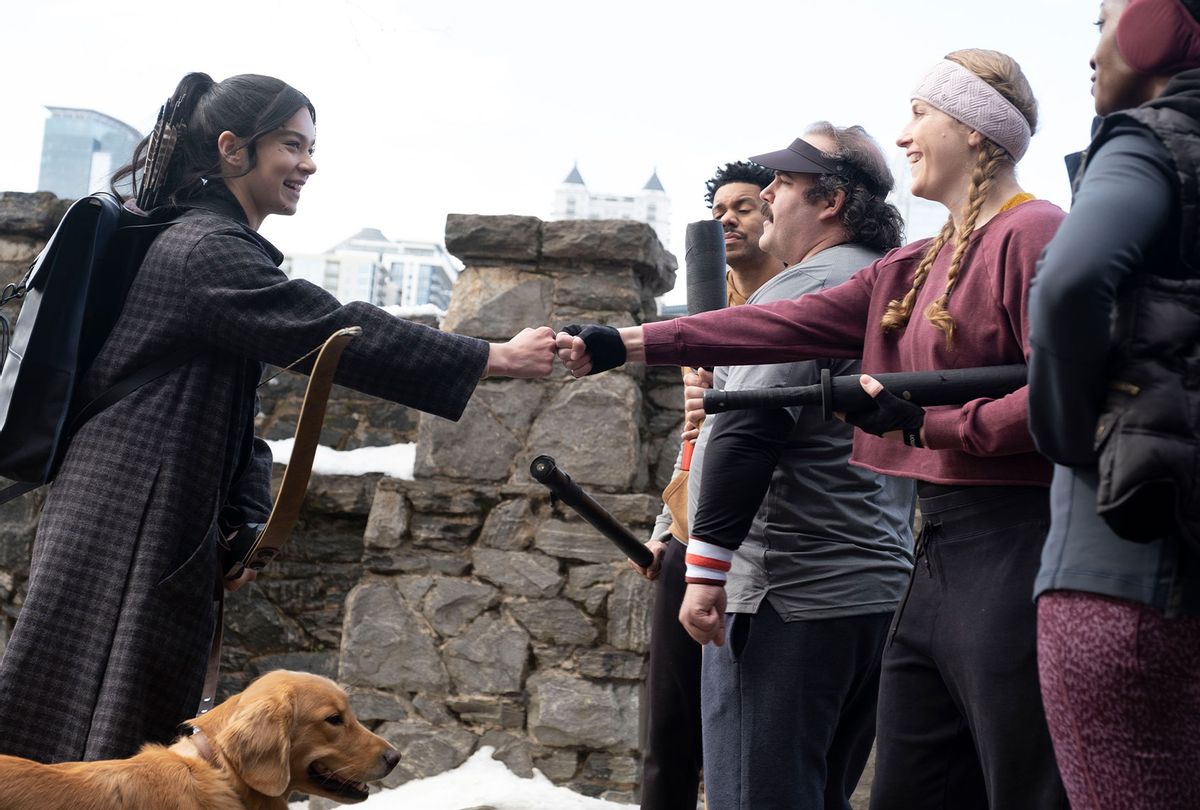 In Kate Bishop's first appearance in "Hawkeye," the Disney+ series, she's barefoot. Young Kate (Clara Stack) is eavesdropping on her parents, and for detective work like that, you need to be comfy.

You need to be comfy for a lot of work, a small though not inconsequential lesson of 2020 and beyond — including the hard work of saving the world. But action stories, among them the Marvel ones, have usually featured superheroes clothed in bustiers and breastplates, tiny tanks and skin-tight leather, including — or especially — women.

Over the years, many women on the big and small screens have fought crime bare-legged in hot pants, which seems like it would increase the likelihood of injury. When so much skin is exposed, some of it is going to get bruised or bloody, or be a target. Those costumes look like a liability in a fight, not to mention a bit chilly on the streets of New York or Asgard, Wheaton or Washington, D.C.

In "The Boys," the Amazon Prime series about the business of being super, new recruit Annie/Starlight (Erin Moriarty) complains about her skimpy costume — made even smaller, with higher-heeled boots and hair teased like a beauty queen, after she comes forward about sexual assault. But her employer is "leaning into old sexist archetypes under the guise of 'girl power.' Annie is told to embrace her feminist strength by wearing less clothing," as Emma Fraser writes on Syfy Wire.

RELATED: "Hawkeye" is a pandemic fable

"The Boys" pokes fun of and examines these archetypes, but for much of time, people have wanted their superheroes uncomfortably and impractically clothed. Enter Kate Bishop, played by Hailee Steinfeld as an adult on "Hawkeye": college archer, rich girl, and would-be partner to Clint's Hawkeye (Jeremy Renner). In the present story, we see her first in lavender athleisure, comfortable but causal. Her boots are flat and possibly steel-toed. "Nice outfit, by the way," her friend says. "Yeah, well," Kate answers. "Sometimes you gotta dress the part."

Fortunately for Kate, the part she's trying to fake till she makes is that of Hawkeye, and if the advice goes that you should dress for the job you want, she's got an easy-going role model. Clint's street clothes are jeans and zip-up hoodies. Even in action star mode, Hawkeye usually wears a vest with pockets, donning a leather hooded jacket as his avenging alter ego, the Ronin.

There are a lot of hoodies in "Hawkeye."

There are also a lot of sweatsuits, a cozy outfit Kate both sleeps in, and in an act of self-care, changes into after a hard fight. She looks ready to work from home. She looks like us.

Kate Bishop is the first aspiring superhero whose clothes I've actively coveted. Along with the sweats — I'm particularly fond of a bright purple number — she wears a signature oversized plaid coat, her long hair frequently in a messy ponytail as she traipses about New York, scarf flapping. You know her shoes are sensible and there are tissues and a snack in her bag. Kate wears jeans sometimes, but they're worn and ripped, with black tights beneath for warmth.

Important for New York in winter, nobody looks cold in "Hawkeye." Kate buys herself and Clint matching Christmas sweaters. Even Kate's mother Eleanor (Vera Farmiga), who dresses in draped silk numbers like a cross between Isadora Duncan and Rebecca from "Ted Lasso," arrives at balls and benefits in frocks that could have come from Halston's line. Her clothes manage to appear effortless, flowing — maybe even machine wash?

A red dress drips from Eleanor's frame at the party where Kate wears an all-black men's suit. After mistaking her for a server, Kate's doomed, almost great-uncle Armand says he would "appreciate it if she [would] wear something a little more ladylike."

But comfort is king here, along with not conforming to gender or superhero stereotypes. The royal color purple also plays a huge role in the show, a nod to the original comics. It's not exactly Pantone's 2022 Color of the Year — that's more of a periwinkle, apparently — but the slightly purple-hued everything makes the show feel contemporary while simultaneously reminding us that it's based on a visual art.

Real life doesn't coordinate, not like "Hawkeye" does, recalling for me the green in Alfonso Cuarón's 1995 film adaptation of "A Little Princess." In "Hawkeye" it's pops of purple: purple Christmas lights on balconies, purple on the costume of Hawkeye in a Broadway Avengers musical, purple smoke, purple goo on an arrow. It feels like watching the comic flicker to life.

It's significant that the villains of "Hawkeye" look cozy too. They are the Tracksuit Mafia after all, not the Three-Piece Suits or the Leather-Panted Boys. And though the matching red (and green, for Christmas) tracksuits look funny, I'm sure the loose clothes make it easy to fight, along with contributing to the bumbling nature of their villainy. Perhaps it's best that cool mob boss Maya (Alaqua Cox) wears slim black pants and a black motorcycle jacket, its faint three stripes the only nod to her rather ineffectual army's attire.

Clothes are important in "Hawkeye" to the storyline as well as to the overall look. Enter the LARPers, the motley role-playing crew who function as a kind of heartfelt chorus for the show. Clint has to win his Ronin costume back from one of them, the affable Grills (Clayton English).

The Ronin costume mysteriously going up for auction is what launched this whole story, and LARPers anchor it. In the finale, airing Wednesday, LARPers have made and given Clint and Kate their new costumes too, signaling the start of a new era, one where the two archers match.

In worn-looking yoga clothes, sweats and headbands, the LARPers practice stage combat like a ragtag group rehearsing Shakespeare in the park. Maybe they stepped out of "Station Eleven." Maybe, like in the Bard's material, they're the clowns. But the casually dressed, mismatched LARPers make the story of "Hawkeye" approachable. Anyone can dream of saving others through acts of courage, strength and daring. Anyone can try. Kate shows us: Maybe anyone can actually do it, and you don't have to be perfect — or wear a Lycra mini-dress — when you do.

With her rashness and clumsiness —  and yes, with those sweats — Kate Bishop, the queen of leaving too many awkward voicemails, may not be the superhero we need. But she's the one we are.