In "Black Widow," here's why a simple vest with pockets means so much

Wherever Yelena's journey in the MCU takes her, hopefully she'll have a garment as handy & iconic as The Vest 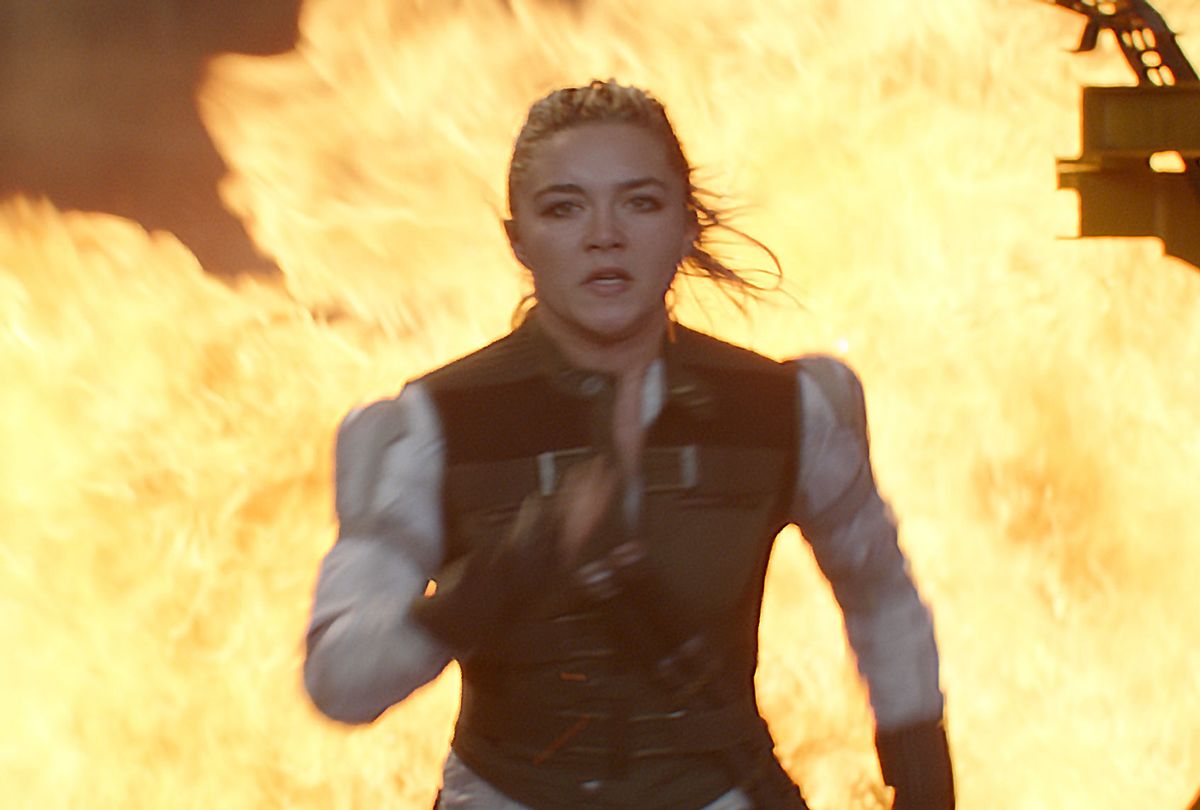 One scene in Marvel's "Black Widow" prequel, which revists the titular superhero's dark, humble beginnings, is particularly resonant. And in a movie full of deadly assassins, a dramatic prison break and an exploding covert facility, the scene in question is a simple conversation between two sisters about the marvel that is a vest.

Estranged surrogate sisters Natasha (Scarlett Johansson) and Yelena (Florence Pugh) have reunited to take down the Black Widow special ops program that has kidnapped, trained and brainwashed innumerable women to become lethal killing machines against their will. Having gone through and escaped the program themselves, they're intent on liberating their sisters in arms. But before that, they share a surprising heart to heart as they drive off in a stolen getaway vehicle.

"You know, this is the first piece of clothing I've ever bought for myself," Yelena says offhandedly of the vest she's wearing. It isn't exactly glamorous nor overtly feminine, so Natasha jokingly responds, "Is that like an army surplus or . . .?"

Feeling the need to justify her purchase — and her fashion sense — Yelena says, "OK, it has a lot of pockets, but I use them all the time and I made some of my own modifications. The point is, I've never had control over my own life before and now I do. I want to do things."

Natasha realizes that to Yelena, the vest is about more than a vest, and she finally smiles and voices her support with a simple, "I like your vest." Yelena, of course, isn't quite done singing the garment's praises, closing the poignant dialogue by driving home the point that "you can put so much stuff in there, you wouldn't even know."

"Black Widow" is rife with punchy feminist storylines, not the least of which include holding up a mirror to the real-life war on reproductive rights and validating non-biological womanhood and family. But this dialogue about Yelena's vest is one that's the most relatable.

Few clothing garments for women are more universally beloved than those with pockets — the more and the deeper the better. Any woman who is complimented on a dress that happens to have pockets will be the first to point out this convenience with a certain conspiratorial glee. The simple pocket should be a given, but its lack is unfortunately the norm in women's clothing.

As Vox reported back in 2016, the pocket has always been political, offering not-so-subtle insight into who is expected to go out into public spaces and carry belongings with them. It may not seem like much, since women are expected to carry purses anyway, but the necessity of carrying a purse in itself is an added, gendered burden — and cost — that men don't have to deal with. In recent years, especially throughout the skinny jeans and jeggings craze of the 2010s, the discourse around lack of pockets in women's clothing reached a fever pitch, as women went from accepting this wardrobe deficiency as an annoyance, to calling it out for its sexism.

Yelena's whole vest situation is especially political, given the context of how she has been denied control over her body and life from the moment she was born and enrolled in the Black Widows program against her will. Over the course of her time in captivity, Yelena is forced to undergo an unwanted hysterectomy, kill untold numbers of people she didn't want to kill, and is denied the ability to have meaningful friendships and relationships with anyone, or have a life of her own in any way. Her first free act was to purchase a handy utility vest, covered in pockets which she can use to not just carry whatever she wants, but also do whatever she wants. And what she wants is to liberate the other Widows and be by her sister Natasha's side.

The iconic and decisively feminist vest is also a symbol of sisterhood — most notably, sisterhood between Yelena and Natasha. By the end of the film, Natasha accepts Yelena's gift and wears it almost right away, from the closing scene of "Black Widow" to her return after years on the run in "Infinity War." The vest becomes an intimate part of her — like her sisterhood with Yelena, even when they're apart.

It's unclear what happens to Yelena in the years between "Black Widow" and "Endgame." Our only hint at this is a mid-credits scene when Yelena visits Natasha's grave, some time after Natasha sacrifices her life in "Endgame." It's in this scene that Yelena is given her "next assignment," supposedly as an assassin under the employ of Julia Louis-Dreyfus' mysterious Contessa Valentina Allegra de la Fontaine: to kill Hawkeye (Jeremy Renner) whose life Natasha had deemed more important than her own. Naturally, being the pocket-advocating, flaming feminist hero she is, Yelena's response is to ask Valentina for a raise.

There's clearly a bright future for Yelena — who might just become the snarkiest, most delightfully sarcastic person in the Marvel Cinematic Universe, carrying on the legacy of her sister, the first female Avenger. Hopefully, wherever her journey takes her, she'll have recovered the iconic vest: a manifestation of her freedom, and her loving sisterhood with Natasha, the Avenger who paved the way for new heroes like Yelena.