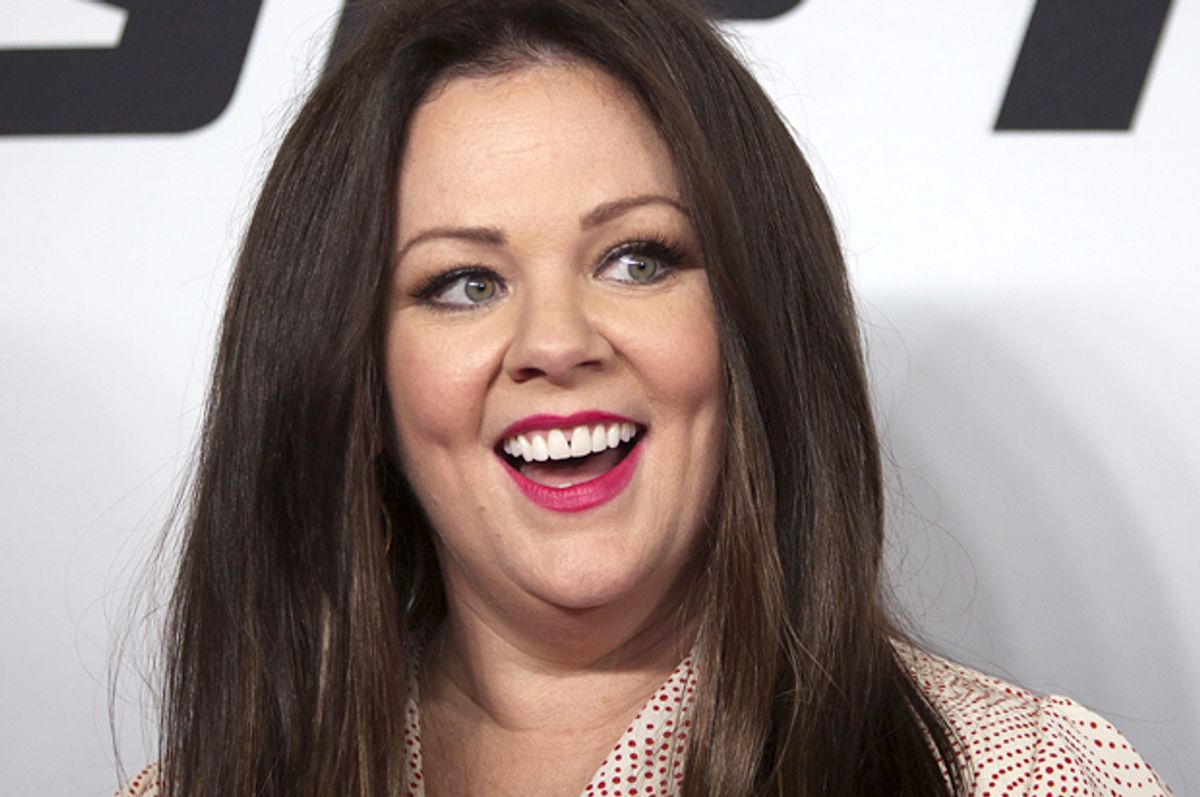 Let this be the year we keep moving toward shedding useless and outdated labels. In June, the United States finally recognized that "gay marriage" can be recognized officially as what it truly is — simply, marriage. Earlier this month, Target got the memo that there's no difference between "building sets" and "girls' building sets" and announced it would remove gender specific labels from its toy aisles. So what do you say we recognize the reality that, as Melissa McCarthy explains it, "Women come in all sizes"?

Your Oscar-nominated, Emmy-winning pretend best friend is at last launching her long promised clothing line — and with it, she's on a mission to challenge the term "plus-sized." In a conversation this week with Refinery 29, McCarthy, whose background is in design, talked about her new Melissa McCarthy Seven7 project, and how she wants to create clothing that recognizes all bodies.

"Seventy percent of women in the United States are a size 14 or above," she says, "and that’s technically 'plus-size,' so you're taking your biggest category of people and telling them, 'You’re not really worthy.' I find that very strange. I also find it very bad business. It doesn’t make a lot of sense numbers-wise. It's like, if you open a restaurant and you say, 'We're primarily gonna serve people that don't eat.' It's like, what? You would be nuts. Yet, people do it with clothing lines all the time, and no one seems to have a problem with it. I just don't get why we always have to group everything into a good or bad, right or wrong category. I just think, if you’re going to make women’s clothing, make women’s clothing. Designers that put everyone in categories are over-complicating something that should be easy."

Complicated is right, Just last year, J. Crew — the brand that has a jean called "the toothpick" — took thinspiration to a new level when it announced it was introducing a size 000. At the time, fashion blogger Belle noted that "Sizing downward… feeds into the notion that clothing size is a scarlet letter." Like many retailers, J. Crew does not use actual size 16-20 models to depict its very special size 16-20 wares.

McCarthy, meanwhile, has for years been open about the challenges of being a non model-sized female — even a very successful one — in an industry that caters to a very specific and very small body type. Last year she told Redbook, "Two Oscars ago, I couldn’t find anybody to do a dress for me. I asked five or six designers — very high-level ones who make lots of dresses for people — and they all said no." Her line, which will be carried via Nordstrom, Macy’s, HSN, Bloomingdale’s, Lane Bryant and Evans, aims to shift that.

And there's already evidence that the time is ripe. Earlier this year, Target collaborated with some of its most vocal fashion blogger critics to come up with its new Ava & Viv plus-sized collection. Tess Holliday launched a movement with the hashtag #EffYourBeautyStandards — and became the largest model signed to a major agency. Curvy Ashley Graham became the first size 16 model to appear in an ad for Sports Illustrated's swimsuit issue. And this summer, Women's Running magazine made healthy, fit — and large — New Yorker Erica Schenk its cover model.

McCarthy says she wants to change the stigma that comes from treating women who go above a size 8 as if they need to banished to another division of clothing.

"I don’t like the segregated plus section," she says. "You’re saying: ‘You don’t get what everybody else gets. You have to go shop up by the tire section.' I have a couple of very big retailers that I think are going to help me chip away at that in a very meaningful way, and I’m really excited about it. I’m not ready to announce them yet, but they agreed to just put me on the floor. I said, ‘Run the sizes as I make them and let friends go shopping with their friends. Stop segregating women.’ And they said,'Okay.'"

Sounds like a perfectly sane plan. We don't tell women whose shoes are above a size 8 that they're plus-sized and make them shop in a different part of the DSW. Why do we have to be so weird and shaming about clothing? Why do we pretend that size 4 is the norm, when it's not? At this point, though, change is still coming one step at a time — McCarthy's own shop on HSN currently features a separate designation for plus sizes. But at least the models represent a more realistic array of body types. And McCarthy's challenge to be more inclusive, less hostile to women, is long overdue, and extremely welcome. "I want getting dressed to be fun again," she says. "I believe that women deserve better choices."