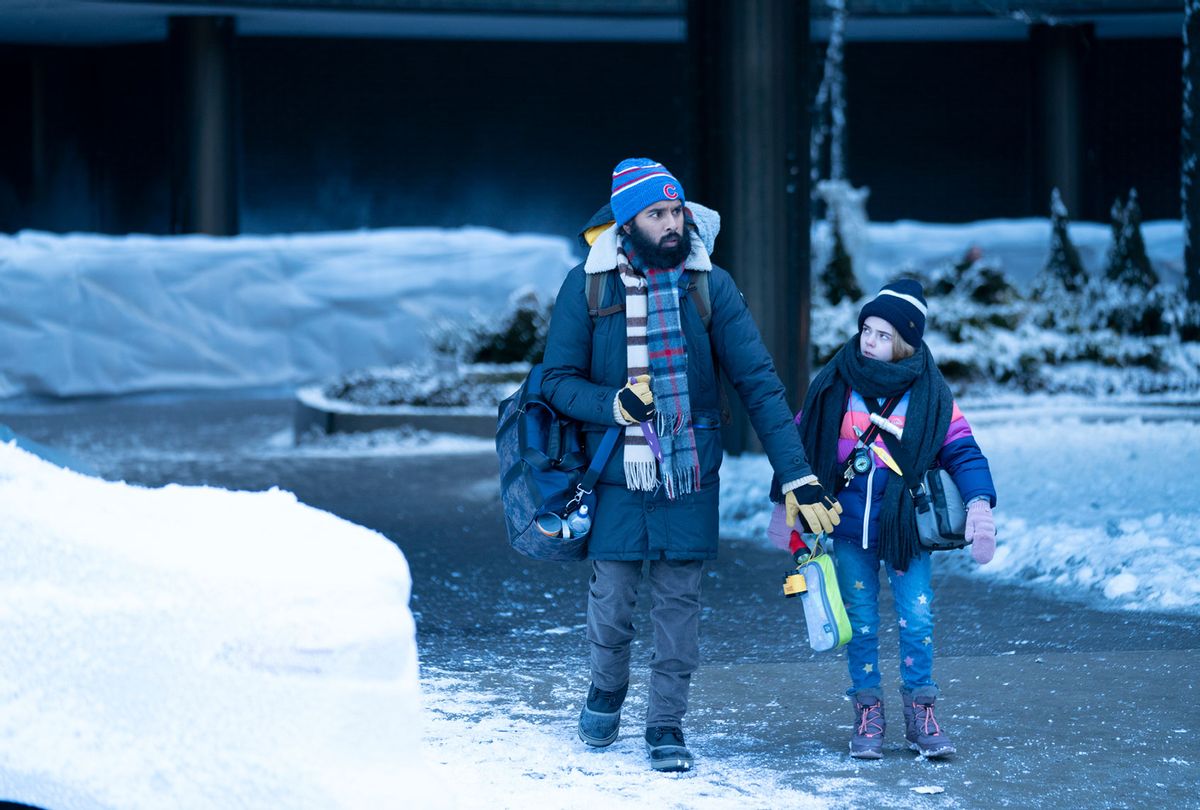 Encountering "Station Eleven," a story about the good that can rise out of a cataclysmic pandemic that reshapes existence within a matter of days, would be a strange and magical gift at any time. Seeing it arrive during  a pandemic that's stretching toward the two-year mark is uniquely strange.

We've seen the world end in so many ways across TV and film. Some of these scenarios' accompanying sights have recurred frequently enough to become central to our apocalyptic visual lexicon: planes dropping from the sky, highways choked by lifeless cars or riderless horses.  Each efficiently sounds the alarm that nobody is steering civilization's tillers anymore.

That would seem to make Patrick Somerville's choice to incorporate each within "Station Eleven" nearly obligatory, and not in a good way.

RELATED: Who lives and who dies? What TV has taught us about who's lucky enough to survive

But as is the case with any piece of art, context is the border dividing cliché and inspiration. Instead of following the lead of shows such as "The 100" or "Y: The Last Man," falling back on the popular assumption that society's collapse would bring out the worst in humankind, "Station Eleven" takes the opposite route, presenting worldwide catastrophe as an opportunity for human resilience and kindness to arise out of the wreckage.

Somerville, who wrote for "The Leftovers," follows the spirit of Emily St. John Mandel's 2014 novel in his adaptation by focusing less on the circumstances that nearly obliterate humankind than the forces that inspire it to continue, namely camaraderie, community, and art as the glue that binds us.

There's an audacity in that suggestion that also makes it singularly attractive to anyone but the hardest cynics, but even they might be won over by this story – even one incited by an extremely infectious, rapidly mutating virus with a one in 1,000 survival rate.

Monetizing violence and destruction is simple. To arrestingly depict creation in the wake of that, let alone sustain all the tension, uncertainty and wonder that comes with that effort, requires skilled restraint.

That Somerville and his directors (including "Atlanta" alum Hiro Murai, Helen Shaver and Jeremy Podeswa) commandingly succeed at this while seamlessly moving between past and future is an absolute achievement, enlivened by grounded performances from a cast guided by the affection and humor woven through the plot. Here, the world ends all at once and declines steadily. People are slow to believe the end has arrived, even as strangers wheel thousands of dollars of groceries up to the grocery store till. The electricity stays on, until it doesn't. Charlatans spin wild promises of salvation for no reason other than to exert what little power they have in a situation beyond their control.

The title shares its name with a self-published graphic novel with a very limited printing, which gains massive significance 20 years after everything falls apart. In the future it lives and breathes alongside Shakespeare and great music, each valued as the aspects of civilization worth protecting and uplifting.

And long before the first of those previously mentioned harbingers of doom slices the screen, we're already plummeting into the unknown courtesy of Jeevan Chaudhary (Himesh Patel, bringing levity to an emotionally grounded performance), a man adrift in the world. On a snowy Chicago night he's in the audience of a production of "King Lear" when its star Arthur Leander (Gael García Bernal) keels over.

Jeevan rushes the stage despite having no apparent medical training, and subsequently ends up with eight-year-old Kirsten Raymonde (Matilda Lawler), a prodigy cast as Lear's daughter Goneril. When the rest of the cast and crew forget about Kirsten in the mayhem following Arthur's sudden death, Jeevan takes it upon himself to get her home. Then he gets a phone call that entwines their lives from that moment onward. 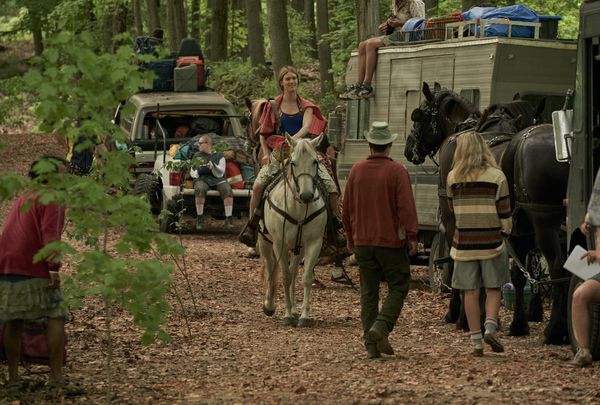 Two decades later Kirsten (played as an adult by Mackenzie Davis, "Halt and Catch Fire") helps lead a caravan of musicians and actors calling themselves the Traveling Symphony, stopping in makeshift towns to perform Shakespeare for communities that welcome reminders of the gentler past lost to the plague. For Kirsten, this is the manifestation of her life's purpose; she announces to Jeevan that she knows she wants to be a Shakespearean actor on the night they meet.

To the people for whom they perform, and the troupe's co-founder, who calls herself The Conductor (Lori Petty), Shakespeare is a codex explaining and processing life's hardships and unfairness. But within this Kirsten holds the text and meaning of the graphic novel close to her heart, along with its story of an astronaut floating through memories of humankind as it was.

This adaptation of "Station Eleven" contains so many trapdoors and routes by which it could have gone astray.

Its web of interconnections and tangents would have thrown off lesser writers and directors, for one. The story also necessitates jumping around in the time through multiple perspectives – not just Kirsten's but that of Arthur's longtime friend Clark (David Wilmot), and Arthur's ex Elizabeth (Caitlin FitzGerald), another famous actor with whom he has a child; and eventually that of Miranda (Danielle Deadwyler), the writer and artist who made the graphic novel.

This is a recipe for clumsiness at best and utter failure in typical executions of such material, even before the tale introduces the menaces roaming this world, including a charismatic stranger (Daniel Zovatto) and another murderous band.

But wisely Somerville and his team avail themselves of the story's dreamlike feel to merge past and present with complete clarity. Through masterful directing and editing, each episode conveys the way that history lives and breathes within memory, coexisting with the present, whether within a performance or a fugue state.

Helping this along is the graphic novel's hypnotic means of expressing disaster and hope as languages that share common phrases, some repeating throughout the series, such as "I don't want to live the wrong life, and then die," and the most prominent of them, "I remember damage."

Part of what haunts Kirsten as an adult is whether her life with Jeevan and his reclusive brother Frank (Nabhaan Rizwan), with whom they take refuge when the pandemic strikes, might have been different if she hadn't insisted on one indulgence.

Jeevan asks himself the same question, often, and usually in the service of keeping this child that calamity dropped into his lap happy. Both of these memories are connected to arduous turns which, even at their worst, crack open a window to allow a bracing gust of humor to cut the tension. Patel gets to make the most of this when, at his lowest point, he spontaneously opens Kirsten's sacred text, peers at a page and bellows, "So pretentious!"

Preventing this from coming off as too affected, however, is the characters' awareness of how absurd life has become, and how ordinarily dangerous it can be outside of the fantastical world they've constructed. Time stretches and contracts before rolling into a wheel of seasons, much in the way our lives do now. A transcendent score augments this, along with injecting fierce joy into moments that are otherwise frigid with despair.

A favorite scene of mine involves Frank blindsiding Kirsten and Jeevan in a ho-hum moment with a loop of vocalizations that become the beat propelling him into a cover of a '90s hip-hop classic that bounces them out of their funk. Such moments highlight how astonishing and naturalistic this cast is onscreen, especially Lawler.

Rare are the times when a role played by a child and an adult could have as easily been led and forged by the younger actor or her mature counterpart. But that's how good Lawler is – you can't tell whether she's matching Davis' tenacity or establishing the baseline for who Kirsten becomes.

Her portrayal is one we'll look back upon years from now as a signpost of greatness in the making, appropriate to a story championing art's ability to makes sense out of chaos and repair broken lives. Crisis changes us, and can make us weirder, hopefully in good ways. Wilmot's Clark evinces this, as does Petty's Conductor, who regularly reminds people her music used to be played on NPR, along with an oddball ambassador played by Enrico Colantoni. And creativity is the lifeblood of weirdos.

"That's what matters – making things," Arthur says in a fit of earnest self-importance that accidentally rings true both in the show and in our now, emphatically arguing for the necessity of art and "Station Eleven" in this sore and precarious moment.

If humanity is to move forward, "Station Eleven" shows us, it must create for its own sake, not simply to drive us but to rally the spirit and remind us of life's meaning, as the story voices it. That is, survival is insufficient.

The first three episodes of "Station Eleven" debut Thursday, Dec. 16 on HBO Max, followed by two episodes weekly on subsequent Thursdays leading up to the final episode on Jan. 13. Watch a trailer for it below, via YouTube.