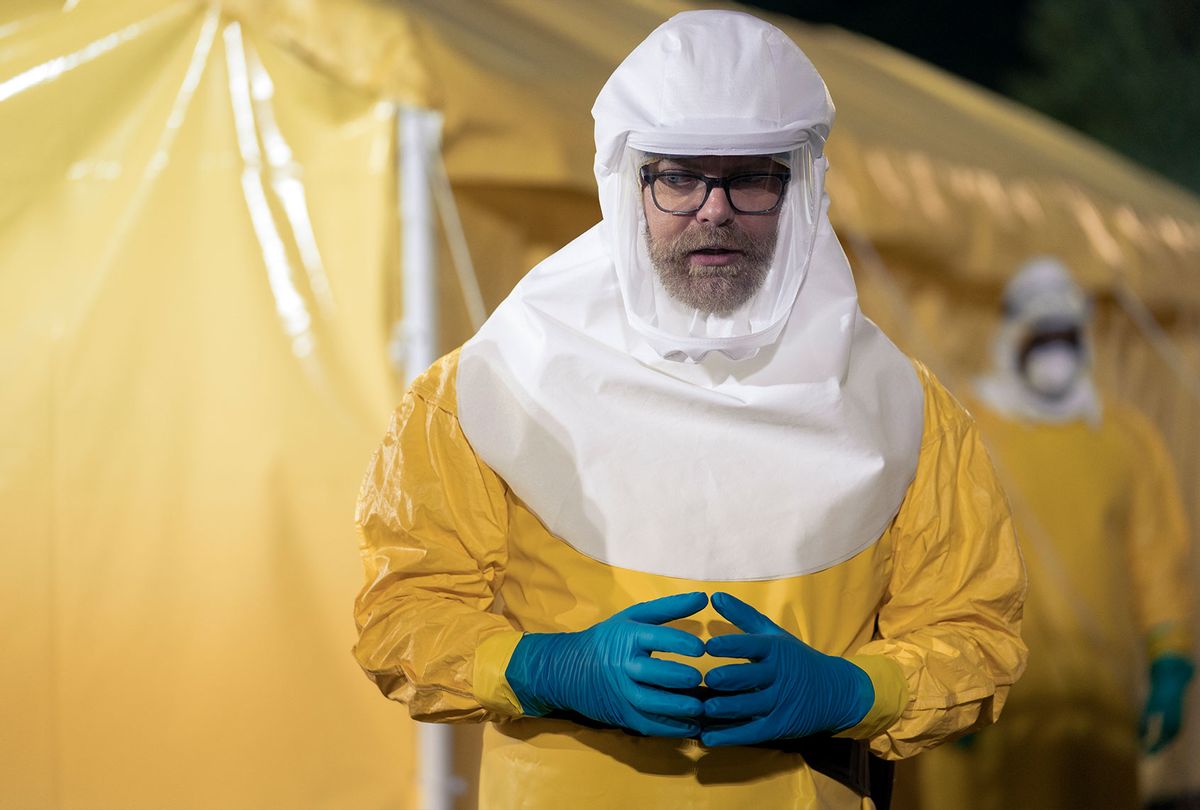 There are TV series that speak to their times, those that are products of their times, and shows that become casualties of them. Amazon's violent, cluttered "Utopia" is an exemplar of all these concepts at once and almost entirely by accident.

This is a series that's been in the works since 2018 and initially had David Fincher attached before being passed to "Sharp Objects" and "Gone Girl" writer Gillian Flynn, adapted from a 2013 British thriller that only lasted a season. Take note of those dates, because they're relevant here. In 2018 the very thought that a pandemic would unravel life as we know it was enough removed from our reality to nestle it in the background of puzzle-driven action drama revolving around a graphic novel with a cult fanbase.

Five years prior to that, when the U.K. original came out, the world was only a few years removed from the 2009 H1N1 pandemic, a novel influenza virus that ripped across the globe, causing nearly 12,500 deaths in the United States alone. But that was a flu; infection rates subsided, and we moved on.

What we could not let go, however, was our fascination with stories containing mysteries and meanings begging to be detangled, a mass infection triggered by the end of "Lost" . . . and we still haven't stumbled upon that cure.

Now our most pressing concerns are related to, yes, a global pandemic that the current president of the United States has failed to curb or attempted to battle with any strategy whatsoever. Conspiracy theorists have infiltrated our government on the federal and local levels, and the world is praying for a vaccine while fearing that anything rushed to market is bound to either be ineffective or laced with potentially dangerous side effects.

That's also "Utopia," more or less, save for a heroine, Jessica Hyde (Sasha Lane), whose life parallels the action in a comic book with a cult following – one that may be laden with clues warning that a deadly manmade pandemic is in the offing. Well, that and recurring appearances by a villain wearing the rabbit's head and a hitmen who indulge in a whole lot of torture and violence.

"Utopia" has polarized critics and many viewers, particularly those who have seen the British original and aren't enamored of Amazon Studios' upgrades. But it is particularly telling that many of the critiques mention the problem of evoking our current moment too closely and nowhere nearly as imaginatively as the moment demands.

The accidental relevance of this series wouldn't be its sole flaw in a timeline where COVID-19 never happened. "Utopia" suffers from stumbles that are all too typical among ambitious creators, primarily the urge to showcase Lane's formidable heroine and a knotty conspiracy with apocalyptic implications at the expense of story and character development.

Diving into the specifics of "Utopia" beyond the barest of descriptions would spoil the twists in its eight episodes, so I'll skip to the diagnosis: this is initially buoyed by fine performances from Ashleigh LaThrop, Dan Byrd, Jessica Rothe, and the always compelling Desmin Borges as comic book fan foursome Becky, Ian, Samantha and Wilson Wilson, respectively. Unfortunately they and Rainn Wilson's disillusioned virology Dr. Michael Stearns are soon overpowered by Case's gruff takeover of their lives, and the casual escalation of a body count.

Maybe these traits would be perceived as lesser sins in times past. This being 2020, a year of exhaustion, anxiety and despair, asking the average viewer to get excited about "Utopia" may be equal in appeal to, say, sitting down with someone who has narrowly escaped the California wildfires and offering to soothe them with a "Chicago Fire" marathon, or a screening of "Backdraft."

We are still figuring out how to navigate this existence, mentally and physically, and television plays a more central role in that process than ever before. It is our information source and our escape, and will increasingly be so as the weather grows colder and the political noise surrounding the election grows more piercing and dangerous.

However as I was watching the finale of "Utopia" a line of dialogue spoken by John Cusack's character Dr. Kevin Christie stuck with me: "People are driven by the need to know what happens next." Mired as we are in such a precarious era, it struck me that the downfall of series such as "Utopia" or even shows revolving around prosaic premises such as Netflix's upcoming "Social Distance" or NBC's "Connecting" is their inability to transport us to places beyond the hell we're in.

"Social Distance" is an eight-part anthology series tracing the chronology of this novel coronavirus from the onset of quarantine to the eruption of protests stemming from the murder of George Floyd. "Connecting" is a network comedy featuring an ensemble cast, and what these shows have in common – with, for that matter, Freeform's "Love in the Time of Corona" and HBO's "Coastal Elites" is that they're all products of our lockdown culture.

Each is filmed using distanced cameras, creating scenes from security footage, computers and mobile devices, or approximations thereof, and basically transforming the audience into webcam spies. The thing is, these are series inviting us to watch conversations between actors conversing directly to us or to each other using web conferencing screens, as if the people watching them haven't been on those screens nearly every waking moment of their days.

"Utopia," meanwhile, is a fiction that imagines a dark, dystopic fantasy of our reality, which is already a dark dystopia, and attempts to resurrect the sort of cryptographic mystery that defined "Lost" in our memory. But if that were all that drama had going for it, the story never would have gotten its hooks into us. Instead its appeal is very simple and the missing ingredient in the "Utopia" formula, which is that we embraced it for the relationships.

This is where "Utopia" fails and, although those other shows are quite different, this is where they come up short as well. I understand, of course, that the very point of "Connecting," "Social Distance" and "Love in the Time of Corona" is to illustrate the difficulty of forging new connections and maintaining the strength of old ones at a time when we're supposed to limit the time we spend outside of our own houses and stay at least six feet apart from people we use to reflexively hug on sight.

And this brings me back to Dr. Christie's question: What would we get, as viewers and humans hungry for an uplift, if creatives stopped looking back or trying to commiserate with the audience and dared to leap ahead a few years and create a destination that isn't dark, disturbing and violent, or too much like looking like the walls of our own coop?

What if someone created a comedy or a drama based on aspiration and hope as opposed to yet another procedural or ensemble piece featuring characters yelling at one another through windows, actual or virtual?

What if, despite the fathoms-deep social divisions wrecking our conscious hours, some enterprising writer and studio can collaborate on a vision that isn't an adaptation of our flawed present or some property that's already been explored. That turns out not to be a place to escape, but a destination at which we can dream of arriving?

Sure, it's an ideal. But it's exactly the type of show I'd happily tune in.