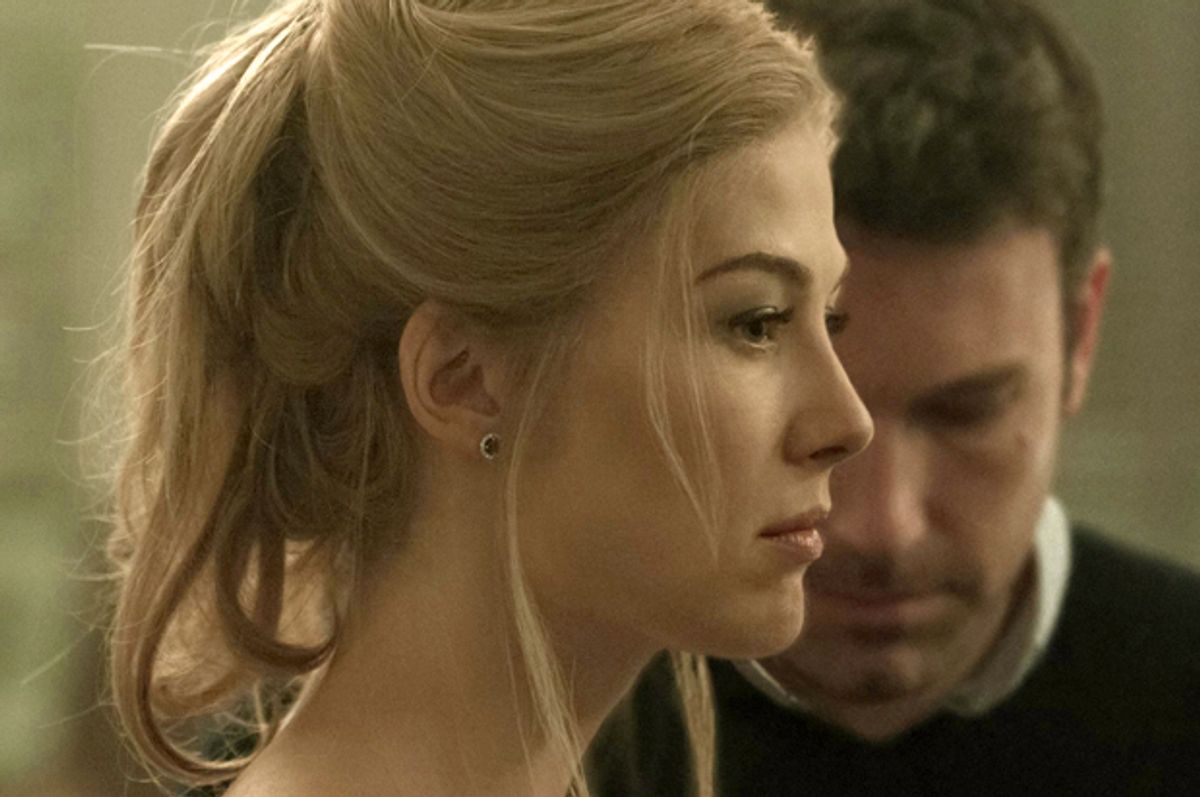 Gillian Flynn’s bestselling novel “Gone Girl” is a work of impressive engineering that mounts a series of grotesque gargoyles above its entrance, like a medieval cathedral advertising all the lurid sins that require expiation within. First and foremost, of course, there are Nick and Amy Dunne, the ickily perfect American couple whose marriage has gone badly south in the wake of the 2008 recession, revealing their damaged and disordered souls. Nick and Amy are played, in David Fincher’s eagerly awaited film adaptation, by square-jawed Ben Affleck and ice-blond English actress Rosamund Pike – the latter as the imitation Grace Kelly, we might say, in an imitation Hitchcock movie. Every detail of Fincher’s filmmaking is so carefully managed that even the casting is revealing: Affleck is a familiar and (mostly) beloved face to mainstream moviegoers, while Pike, despite a distinguished film and TV career across the pond, is far more of an enigma. This shoves the movie away from the narrative ambiguity of Flynn’s novel, in ways that may seem superficial but are actually profound.

Alongside Nick and Amy’s ugly-beautiful faces we have nightmarish TV harridan and scold Ellen Abbott (Missi Pyle), a Nancy Grace-style legal pundit who serves as Nick’s judge, jury and would-be executioner in the court of public opinion. There’s also Desi Collings (Neil Patrick Harris), a St. Louis old-money socialite who has been obsessed with Amy since their prep-school days together; Andie (Emily Ratajkowski), a duplicitous and manipulative former student of Nick’s; and Amy’s vampire-like parents, Rand (David Clennon) and Marybeth (Lisa Banes), who cannibalized and massaged the details of her childhood into a beloved series of children’s books. Standing outside or above this freak show, as a kind of Greek chorus or collective conscience, are three sexless or androgynous commentators: Celebrity defense attorney Tanner Bolt (wonderfully played by Tyler Perry, of all people), no-nonsense small-town police detective Rhonda Boney (Kim Dickens) and Nick’s tomboy sister Margo (Carrie Coon), who never wears anything but blue jeans and whose personality consists of nothing beyond Nick’s better angels.

It’s already become famously difficult to review this movie, which received its world premiere on Friday as the opening-night feature of this year’s New York Film Festival (and opens in theaters this coming Friday), without giving too much away. Despite the massive popularity of Flynn’s book, a great many viewers will come to “Gone Girl” knowing little or nothing about Nick and Amy’s story, and looking for a stylish Ben Affleck thriller. That too shapes the outcome. While Flynn herself wrote the screenplay (a mixed blessing, I would say), the movie handles the story’s nested switchbacks and revelations quite a bit differently than the novel does, and ends up leaning pretty hard in Nick’s direction.

In both tellings, Nick comes home to the couple’s suburban Missouri house one day to find Amy gone, amid signs of a possible break-in and struggle. He immediately calls the cops, claiming to have no idea what has happened to his wife or where she is. In a movie, especially one with a handsome and likable star, we are naturally inclined to treat what we see on the screen as objective reality, whereas in Flynn’s novel we rapidly become alert to the fact that Nick is not an entirely reliable narrator, and may be lying to us or to himself.

In fact, what the ever-slippery Fincher shows us in the first half of “Gone Girl” isn’t always what “really happened,” and he does make an effort to simulate Flynn’s back-and-forth between the colliding stories of Nick and Amy. As Nick comes slowly unglued in the media spotlight that descends upon North Carthage, Missouri – it's an unsolved crime involving a beautiful blonde and her smirking, handsome husband – Amy, through a series of diary flashbacks, begins to unveil what went wrong in their seemingly ideal marriage, and how they devolved from high-powered Manhattan media couple to unhappy, unemployed denizens of a middle-American McMansion. But the major plot reversal comes much earlier in the movie than the book and barely seems like a surprise. Fincher is more interested in the metaphorical and satirical elements of “Gone Girl,” as a cool, dark Grand Guignol farce about the hazards of heterosexual marriage and the empty hungers of the media age, than in the thriller plot, which only barely holds together in the novel and entirely falls apart here.

At times Flynn and Fincher seem to be in sync during “Gone Girl,” and at other times they appear to be fighting each other to a draw. Amy’s famous diatribe against the archetype of the “cool girl,” which delighted so many female readers, becomes an insignificant throwaway here, a bitter footnote seemingly inspired by her husband’s specific misdeeds. Nick and Amy’s supposedly charmed New York existence barely figures in the film and never seems convincing; their literary meet-cute at some Brooklyn hipster party becomes an awkward scene out of some mediocre and earnest indie film, rendered almost inaudible, as if to mask the stilted dialogue. You can read this as part of Fincher’s design, as an interpretation of these characters’ essential emptiness: What Nick and Amy thought was a storybook Manhattan romance was nothing more than a hackneyed set of mannerisms. Indeed, one way of understanding Flynn’s novel is as a neo-Henry James portrait of two monstrous people who can never escape each other, with a page-turning mystery plot plastered on top.

Still, it’s hard to avoid the conclusion that one character is a lot more monstrous than the other. “Gone Girl” has the good or bad fortune to arrive at a moment when there’s considerable cultural discussion about misogyny and violence against women, and to embody those themes – as a novel and screenplay written by an ambitious and talented young woman – in especially disturbing fashion. It’s nearly impossible to discuss Amy, or Rosamund Pike’s chameleonic performance, in any detail without giving away essential plot twists. Let’s say this: If Affleck as Nick is too unruffled, too shallow, then Amy is impossibly deep, almost bottomless. In an opening voice-over, Nick imagines cracking Amy's skull open to read her thoughts, and by the end of the story Flynn and Fincher dare us to sympathize with him. Pike may well get an Oscar nomination for this performance, and I daresay she deserves it, but not because Amy resembles a human being. She resembles about six of them, as if Amy were a female archetype splintered into overlapping and competing personalities by the pressure of trying to live up to her beauty, her blondness, her wealth and her “love affair” with the “perfect guy.”

I suppose I found the gender politics of “Gone Girl” troubling on some levels, and Fox is clearly hoping that a battle-of-the-sexes audience debate will sell tickets. But like all of Fincher’s movies, this one is an intensely technical exercise steeped in cinema history, including the history of cinematic misogyny. So the net effect is more like meta-troubling, like a coldblooded and endlessly clever attempt to engage the outrage reflex and then undercut it. After Amy disappears, Boney and her cop underlings find the first clue in her underwear drawer: An envelope marked “Clue One.” As we later learn, those clues are a treasure hunt leading to a set of wooden Punch and Judy dolls, stars of a medieval farce about a shrewish wife and her murderous husband. These dreamlike psychological symbols are drawn from Flynn’s novel, to be sure, but I found myself imagining a more nightmarish and unhinged version of Fincher’s film, set free from the byways and detours of her screenplay that clearly do not interest him. Fans of the book, I suspect, will find themselves repeatedly frustrated by all the things the movie elides or omits; on the other hand, a friend who hadn’t read the book found key elements of the plot, including its mordant conclusion, almost incomprehensible.

“Gone Girl” features a tremendous ensemble cast who mesh marvelously; it’s tough to pick favorites, although Perry’s calm, funny, deadpan lawyer and Dickens’ commonsensical and thoroughly unimpressed hometown cop are obvious choices. I would argue, in fact, that Affleck’s bland characterization is a weak spot, although that may reflect the way the film’s truncated narrative boxes him in. All the technical command of image, sound and production design for which Fincher is justly famous is here as well. (As usual, the cinematography is by Jeff Cronenweth, the music by Trent Reznor and Atticus Ross, the editing by Kirk Baxter and the design team led by Donald Graham Burt.) It’s a work of chilly wit and bleak metaphor, an artifice that invites the kind of analytical response where we pull on our chins and discuss how other people, more naive than we, will receive it. My diagnosis is that it’s slightly too glib to be a great marriage drama and slightly too grim to be an Oscar contender. But to say this movie is soulless is descriptive rather than judgmental: It depicts a world of naked, stupid hunger where soulfulness has been stripped away and where all marriages end up in big, empty houses of lies and betrayals, with or without the police investigations and TV interviews and murder-groupies bearing casseroles of Frito-cheese.