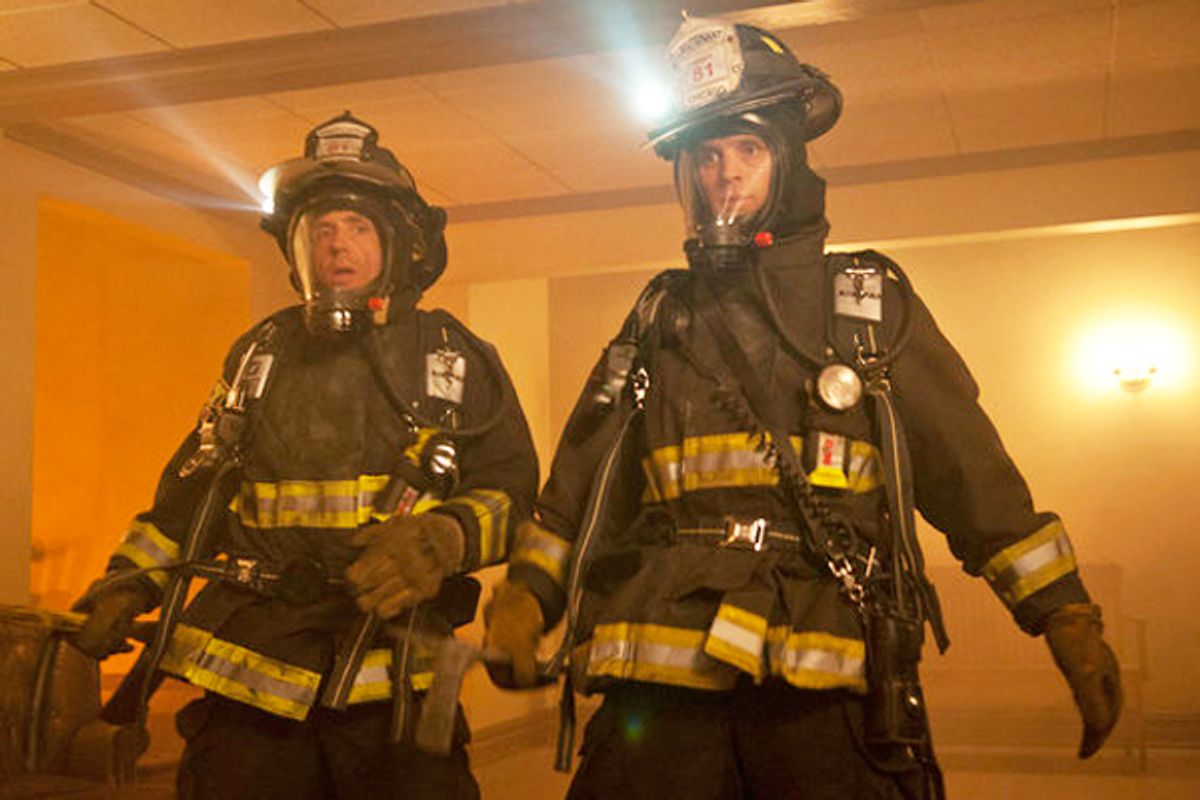 A piece in the New York Times this past weekend described “Chicago Fire,” the new NBC drama from “Law & Order” creator and super-producer Dick Wolf that premieres tonight, as being “Dick Wolf 2.0.” Set in, yes, a Chicago firehouse, the new series is referred to as “2.0” by Wolf’s staff because it’s an update on the all work, no play dictum the “Law & Order” franchise obeys. Yet, to judge from "Chicago Fire," “Dick Wolf 2.0” is not a new version of anything at all, which isn’t exactly a bad thing. “Chicago Fire” will be instantly familiar to anyone who has ever seen an episode of “ER” or, even more precisely, “Third Watch,” the slightly gritty early-aughts series that tracked the professional and personal lives of a bunch of nice-looking, emotionally damaged EMTs, a soap opera dressed in a procedural’s clothing. Except for a cameo by Rahm Emanuel as himself, "Chicago Fire" is a predictable but pleasantly familiar throwback that could have been on TV a decade and a half ago.

The series begins soon after the ridiculously good-looking cast — so ridiculously good-looking, you can say it in the “Zoolander” voice — have lost a colleague in the line of duty. The stress and guilt of his death have made enemies of the two male leads, Matthew Casey (“House’s” Jesse Spencer), the good guy, and Kelly Severide (Taylor Kinney, Lady Gaga’s boyfriend), who heads up a special rescue squad and is the showboating, likes-to-wear-leather, brooding bad boy of the piece. Surrounding these two are, among others, the gruff, steady fire chief (Eamonn Walker), the fresh-faced newbie and audience surrogate Pete (Charlie Barnett), Steve from “Sex and the City” (David Eigenberg) as a guy who just had his house foreclosed on, and two gorgeous EMTs (“The Good Wife’s” Monica Raymund and Lauren German), one of whom is a lesbian, which we find out when Pete is pranked into hitting on her.

The first episode is a cozy swirl of plot points recycled from everything from  “Backdraft” to last year’s swiftly canceled “Prime Suspect,” cute male-teasing familiar from every cop show ever made, and back stories that would do a soap opera proud. (Casey is maybe breaking up with his doctor fiancée, who maybe had an abortion without discussing it with him; Severide is addicted to painkillers.) Nothing that happens in the first episode, from the banter, to the action set pieces, to the bittersweet ending, is surprising — the closing credits play to, naturally, a Bruce Springsteen song — but the whole thing is so professionally executed, it hardly matters.

TV has been missing a laconic soap like “Third Watch” for quite a while now. A reasonably exciting, reasonably uncheesy drama about a bunch of messed-up good guys that is not coldly procedural or gushily emo is exactly the sort of broad series that network, and not cable TV was designed to make. “Chicago Fire” is not poised to be as moving or exacting as early seasons of “ER,” which had original characters in unexpectedly hard-nosed and emotionally wrenching story lines, but it should suffice as televisual comfort food. It’s a mark of just how mediocre this new fall TV season has been that a show as standard as “Chicago Fire” is one of its better offerings.